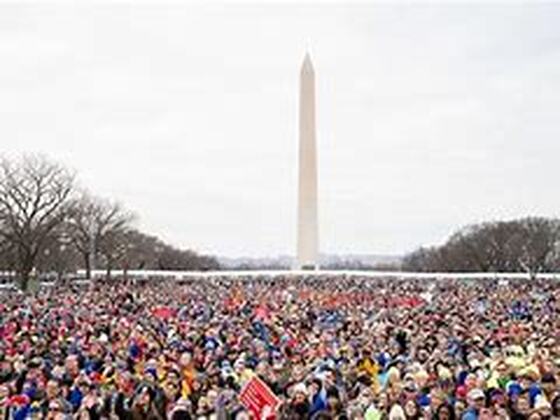 WASHINGTON - Hundreds of thousands of people went to Washington, D.C. Friday, for the 50th annual March for Life.

The march was established a year after the U.S. Supreme Court's Roe v. Wade decision established a nationwide right to abortion. This was the first march since the high court struck the law down last June.

"We really see this March for Life as one of the most significant yet. Yes, we are in a post-Roe world, but we're really in a new world...What the Supreme Court did in June was they gave this issue to the people and their elected representatives," Jamie Dangers, legislative director at the Susan B. Anthony List told CBN News.

Since then, abortion services have nearly ceased to exist in 14 states. In Texas, for example, according to the most recent state data, only three abortions were reported for the month of August, all for medical reasons. That's a 99.9 percent decrease from June.

Many of the states are now considered the most abortion restrictive had trigger laws go into effect immediately
or shortly after Roe was overturned.

Meanwhile, legislatures in other states immediately got to work passing laws to protect abortion rights. President Joe Biden also pledged the full support of the federal government back in October.

"The first bill that I will send to Congress will be to codify Roe v. Wade. When Congress passes it, I'll sign it in January, marking 50 years after Roe was decided the law of the land," Biden said during a speech hosted by the Democratic National Committee.

That, however, was before the midterm elections. With Republicans now in control of the House of Representatives, Biden's pledge went nowhere, and the GOP is already getting to work on multiple pro-life priorities.

"I think we have some work to do, but I think for example the condemnation of the violence against pro-life centers, that should pass the Senate, who can go on record and say they think that's ok? We'll present to them some challenging things if they're going to vote against it I think the voters will take that into account in the next cycle in 2024," U.S. Rep. Mike Johnson (R-LA) told CBN News.

In years past, the route of the March for Life led to the Supreme Court. This year, pro-lifers will march to the steps of the U.S. Capitol, signaling a new phase for the movement and symbolic of the work still to be done to protect the unborn at the state and federal levels.