RETURN
In an interview with founder of the Jesus Menino community, which cares for disabled children,
​Brazilian President Jair Bolsonaro pledged to continue to fight for the unborn. 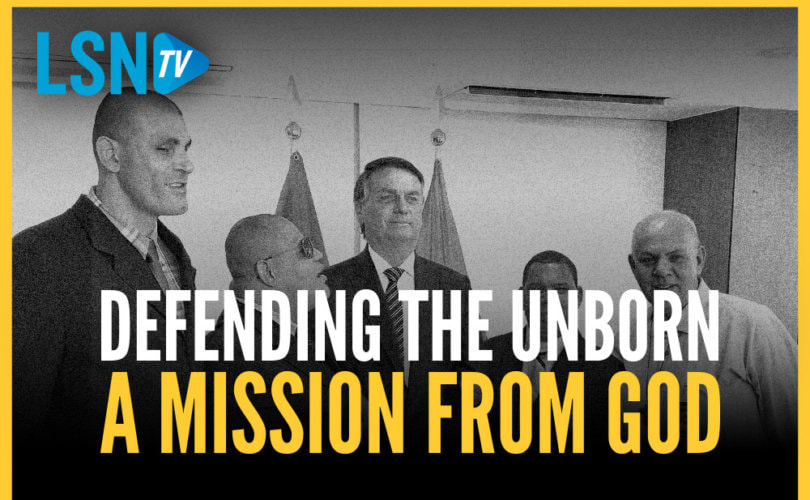 BRASILIA, Brazil (LifeSiteNews) – Brazil’s pro-life president Jair Bolsonaro recently met with Tonio de Mello, the founder of the Jesus Menino community which cares for disabled children, saying that “it is a mission from God” to “fight in defense of life.”

Last week, Brazilian President Jair Bolsonaro hosted Tonio De Mello – an adoptive father of 44 disabled children – in the nation’s capital of Brasília. Tonio de Mello is the founder of the Jesus Menino (Boy Jesus) community which cares
for disabled children, many of whom were harmed by botched abortions.

Children in the Jesus Menino community were either abandoned at birth or are the survivors of failed abortions, while others would have been aborted were it not for De Mello’s assistance to women in crisis pregnancies.

Three of De Mello’s adopted sons accompanied De Mello to the capital, one of whom, Alex, conducted a special interview with President Bolsonaro discussing what it means to “fight in defence of life” as the country’s president.

“I believe it is a Mission from God that has been entrusted to me,” Bolsonaro answered.
“He calls me to do everything possible for the good of all.”

“He is the one who was in front for me to [be] elect[ed] and keep me standing in the face of so many problems
in the whole world,” Bolsonaro continued.

Alex further asked Bolsonaro, “What message does the Lord leave for the Jesus Menino Community
and for so many undecided people in their lives?”

“To believe! To react! To pray!” Bolsonaro joyfully responded.

In his recent meeting with Bolsonaro, De Mello suggested that the president create an ambassador for life in Brazil.

“We showed Bolsonaro two important projects,” De Mello recalled, “which is the extension of a pro-life house that we are building in the Diocese of Petropolis, and another house that we want to expand in order to continue to adopt victims of abortion, who were left disabled.”

We want our nation to defend life, receive life, be with life from the beginning to the end, defend life in its totality,” he continued. “That’s what we are asking our President today.”

Accordingly, the pro-life advocate asked Bolsonaro, “What is your view about the value of life in Brazil nowadays?”

“Life begins at conception,” Bolsonaro promptly responded. “Obviously, there are people who want to legalize abortion. It shouldn’t happen, for our own sake, for the defense of life, and for our last victory against abortion.”