A Tale of Two Pastors: How John MacArthur and Rick Warren Led Through 2020 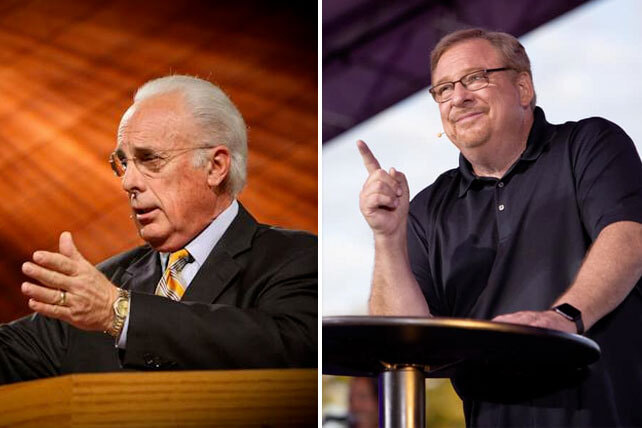 Both Pastor John MacArthur and Pastor Rick Warren have sizable congregations in southern California, which has recently become the “epicenter” of the coronavirus outbreak in the United States. Despite their proximity, however, MacArthur’s and Warren’s responses to the pandemic and the resulting restrictions associated with them couldn’t be more different. While MacArthur views state-mandated restrictions as discrimination against religious institutions and has kept his church open even when the state has said not to, Warren perceives no such discrimination and sees no reason to reopen his church for physical gatherings in the immediate future.

“Most churches only have one purpose: worship. And if you take worship away, you’ve got nothing. They’re in a hurry to get back to worship because that’s all they’ve got,” Warren told Cameron Strang of Relevant Magazine during a recent interview.

Pastor John MacArthur: This is about religious freedom

John MacArthur of Grace Community Church (GCC) in Sun Valley, California has made headlines this year by claiming “there is no pandemic” and that churches who choose not to meet in person “don’t know what a church is and they don’t shepherd their people.” MacArthur has taken to Fox News to disseminate his belief that churches should be considered as providing an essential service and that to deny a church the right to meet in person is to deny religious freedom.

MacArthur has also had some success while fighting a multi-pronged legal battle against state and city officials concerning the meeting restrictions placed on houses of worship in southern California. In July, GCC opened its doors for in-person worship after holding remote-only services for several weeks during the initial stay-at-home order in California. Calling the congregation’s gathering, which was technically forbidden, a “peaceful protest,” MacArthur maintained his belief that the majority of government officials have overplayed the virus and that it doesn’t represent much of a threat to people.

After the church showed up on Los Angeles county’s outbreak list in October, again MacArthur and his legal team downplayed the threat of the virus, saying that the church was being targeted for their religious beliefs. A statement from GCC’s legal team claimed “the LA Times and others’ grossly misleading and fear-mongering headlines aim to mischaracterize Grace Community Church as irresponsible and a superspreader.”
At other times, MacArthur communicated that the church wasn’t unsympathetic to those members who don’t feel comfortable meeting in person. MacArthur emphasized members can continue to stay home and watch the live stream if, for instance, they have compromised immune systems. Additionally, the church added outdoor seating in August to accommodate around 1,000 people. MacArthur said, “we want to make people feel welcomed.” The church pledged to provide hand sanitizer, masks, and water to those choosing to sit outside.

Still, pictures and video from GCC’s services throughout the summer show people sitting inside the sanctuary in close proximity to one another, and the majority of people are not wearing masks. More recently, journalist Julie Roys published an article about another potential outbreak at GCC that has yet to be reported or formally acknowledged by the staff of the church.

Despite the controversial stance MacArthur has taken, many other Christian leaders have applauded his efforts to fight for the church and its right to worship however it deems necessary.

Pastor Rick Warren: This is about loving your neighbor

Pastor Rick Warren of Saddleback Church, which has locations throughout the Los Angeles region, represents a good character foil to MacArthur’s more aggressive persona. Saddleback has chosen not to open its doors for worship gatherings until sometime in 2021.
Author of the Purpose Driven Life, Warren views adhering to state guidelines for social distancing as a tangible way to love one’s neighbor. “Some churches are willing to gamble the health of their people. I’m not. The good shepherd prays for his sheep, cares for his sheep. One day I will be responsible. I don’t want to be a super-spreader. I’m not doing this out of fear; I’m doing this out of love. You wear a mask for love of your neighbors, yourself,” Warren explains.
Warren, who hasn’t been as publicly vocal about his position as MacArthur has, believes a church shouldn’t be limited to a physical gathering as its sole expression of worship and implies that some churches should reevaluate how they are structured. For Saddleback, which has built itself on a model of small group ministry and community outreach, Warren believes their diversity of programs has served them well:

In fact, Warren says Saddleback is doing so well they are “in revival” right now. He told Strang “We have led over 16,000 people to Christ since March….We’re averaging about 80 people a day coming to Christ—80 people a day.”

This isn’t to say that both churches have operated in such opposite ways that they haven’t overlapped in some areas. For instance, GCC does have a small group ministry that has been operating, according to Roys’ reporting and the church’s website. It’s also apparent that GCC isn’t limiting its ministry efforts to worship services once a week that members have no choice but to attend in person. As with most things in life, the situation requires nuance to interpret.

Now that Los Angeles county has lifted its ban on indoor worship services thanks to recent SCOTUS decisions favoring a church’s right to assemble, it remains to be seen if and how MacArthur and Warren might revise their approaches to ministry in as the pandemic wears on.
by Megan Briggs
CHURCHLEADERS
https://translate.google.com/translate?hl=en&sl=en&tl=fr&u=https%3A%2F%2Fchurchleaders.com%2Fnews%2F387745-a-tale-of-two-pastors-how-john-macarthur-and-rick-warren-led-through-2020.html&anno=2&sandbox=1
UP