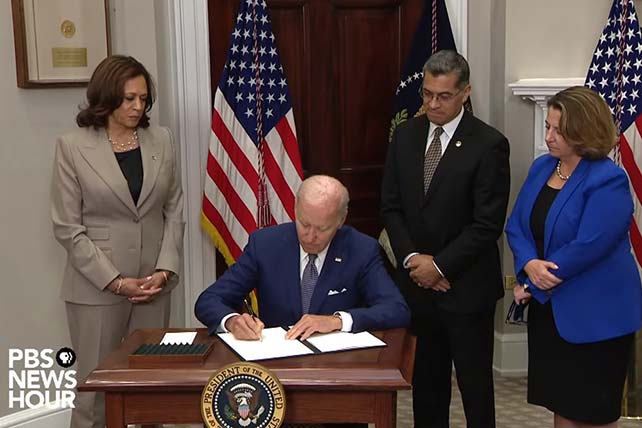 Biden criticized the Supreme Court during his live address, describing their reversal of Roe as not “driven by the Constitution.”

“The truth is today’s Supreme Court majority that is playing fast and loose with the facts,” Biden said, claiming that medicine shouldn’t be frozen in “the 19th century” and arguing that Roe sought to protect women from unsafe abortions.

The President urged Americans to vote Democrat this November, saying, “The only way to fulfill and restore that right for women in this country is by voting, by exercising the power at the ballot box.” Biden went on to express his belief that the country needs two pro-choice senators and a pro-choice house to “codify Roe as federal law.”

The Supreme Court’s decision shows that they won’t protect women’s rights, Biden claimed. “The court now practically dares the women of America to go to the ballot box and restore the very rights they’ve just taken away.” The President shared that he believes women will turn out in record numbers during November’s election to reclaim abortion rights.

Biden promised that he would sign a law that codifies Roe as soon as it comes across his desk. He also warned that Republican governors, state legislators, and what he described as “Republican extremists in Congress” are determined to “impose the harshest and most restrictive [abortion] laws seen in this country in a long time.” The 79-year-old president believes strict abortion laws put women’s lives at risk, saying that the Supreme Court’s decision and strict state abortion laws are “giant steps backwards.”

The President used rape and incest as reasons someone should be allowed to get an abortion, citing the recent case of a 10-year-old girl in Ohio who was six weeks pregnant and had to travel to Indiana to get an abortion after being raped.
Biden believes that the abortion may have saved her life.

“Does anyone believe that it’s Ohio’s majority view that that should not be able to be dealt with or in any other state in the nation? A 10-year-old girl should be forced to give birth to a rapist’s child?” Biden scornfully questioned. “I can tell you what—I don’t.”

The aforementioned case has sense been in question and is still being under the process of being fact-checked.

“This executive order directs the Department of Health and Human Services, HHS, to ensure all patients, including pregnant women and girls experiencing pregnancy laws, get emergency care they need under federal law, and the doctors have the clear guidance on their own responsibilities and protections—no matter what state they’re in,” Biden explained.