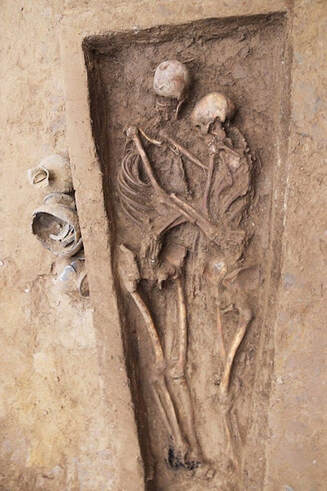 Scientists argue that they cannot know the gender identity with which the remains identified.

As soon as ancient human remains are discovered, archaeologists begin the work of determining a number
of traits about the individual, including age, race, and gender.

But a new school of thought within archaeology is pushing scientists to think twice before assigning a gender to ancient human remains.

It is possible to determine whether a skeleton comes from a biological male or female using objective observations based on bone size and shape. Forensic pathologists do the same in their investigations.

But LGBTQSAI+ activists argue that scientists cannot know how a former individual identified himself during his lifetime.

"You may be familiar with the argument that archaeologists who find your bones one day will attribute to you the same sex you had at birth, so no matter if you make a sexual transition, you can't escape your assigned gender," Emma Palladino, a master's candidate at the Université de Montréal in anthropology, tweeted last week. In 2019, she published an article entitled A New Way Forward: Decolonization and Indigenous Voices in Western Museums.

For Miss Palladino, assigning a sex to a skeleton is "".

"Labeling human remains as 'masculine' or 'feminine' is in any case rarely the end goal of an excavation," Palladino wrote. "The 'bioarchaeology of the individual' is our goal, it integrates absolutely everything we discover about a person into a nuanced and open biography of his life."

She is not alone. Gender activists formed a working group called Trans Doe to "explore ways in which current standards of forensic human identification do not serve people who do not clearly fit the binary division of the sexes."

"We propose a gender-sensitive approach to human identification by bundling missing and unidentified databases for contextual clues such as deceased people wearing culturally coded clothing according to a sex other than the sex assigned to them," says the group's mission statement. [It is therefore first necessary to "assign a sex" biological to these remains to allow this research!]

Last February, University of Kansas associate professor Jennifer Raff published "Origin: A Genetic History of the Americas," in which she stated that there was "no clear distinction between individuals who are physically or genetically 'male' or 'female.'"

Raff (opposite) suggested that scientists cannot know the gender of a 9,000-year-old biologically female Peruvian hunter because they don't know whether the hunter identified herself as a man or a woman — a concept of "duality" that she says was "imposed by Christian colonizers."Raff did not respond to a request for comment from The College Fix.

San Jose state archaeology professor Elizabeth Weiss told The Fix that eliminating gender classifications amounts to "ideologically motivated falsification." Weiss said there was a movement among academics "to impose in all areas the concepts dear to [woke] academics."
Weiss said the recent explosion in the number of people identifying as transgender suggests that this is a social fad and not a biological modification and that "a posteriori desexualization helps to obscure this obvious fact."

She noted that the application of biological sex to bodies often helps to dispel myths harmful to women.

"Some early anthropologists sometimes confused some sturdy female skeletons with male skeletons, especially in the Aleut and Eskimo collections; it reinforced false stereotypes that women didn't work as hard as men," she said. "Over time, biological anthropologists and archaeologists have worked hard to determine which traits are determined by gender, regardless of time and culture. This ideological desire to erase this progress is retrograde for science and women. »

"Determining the sex of skeletons is an essential skill in forensic medicine and any decrease in this skill will have a negative impact on criminal investigations, depriving victims and their families of justice," she said.

Weiss is currently suing her university because it prevents her from accessing that institution's collection of human remains, which she says is a retaliatory measure for her stance against repatriating the human remains [to the countries where they were discovered].

Weiss is supported by University of Cambridge researcher Jennifer Chisolm, who said analyses that transgender people play an important role in indigenous populations are often ahistorical and may even divert attention "from the contemporary
discrimination [these individuals] face within their own communities."

Gender ideology is not the only one making its way into anthropology and archaeology. Some activists have also called on scientists to stop classifying skeletons according to their race.

"Forensic anthropologists have not fully considered the racist context of the criminal justice system in the United States related to the treatment of blacks, Indigenous peoples, and people of color; nor did we consider that estimating ancestry [assigning a race] could actually hamper identification efforts due to entrenched racial bias," write Elizabeth DiGangi of Binghamton University and Jonathan Bethard of the University of South Florida in a study published in January.

According to DiGangi and Bethard, "ancestry estimation contributes to white supremacy," both authors call this practice "dangerous."

And the names of birds and primates

Others have called for changing the names of primates derived from white men in the northern hemisphere. Activists argue that continuing to use the current names "perpetuates colonialism and white supremacy."

Here is an excerpt from the description of this article (protected by a pay wall): "Primatology has colonial roots and remains characterized by a colonial dynamic. Primates are mostly found in the Global South, while primatologists are historically predominantly from the North, not from range countries. Imperialism has directly facilitated pioneering fieldwork in primatology, including that of CR Carpenter in Panama and Malaysia (Ahuja, 2013; Carpenter, 1934, 1940; Haraway, 1989) and Jane Goodall's in Tanganyika
(Goodall, 1962; Haraway, 1989; Rodrigues, 2020). » 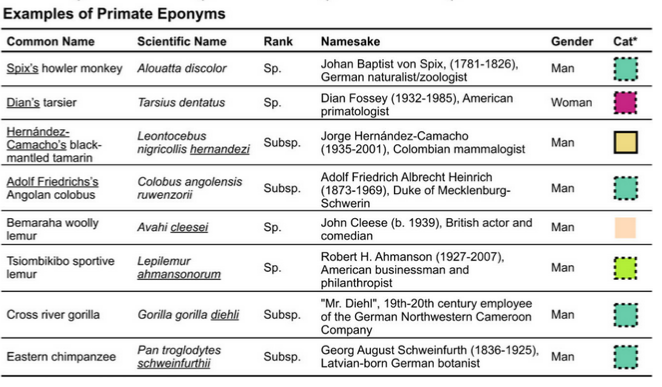 "This is just another attempt to impose the current Woke ideology where it has no place," Weiss said.

FREE SCHOOL
For a free school in Quebec: Activists lobby to prevent anthropologists from identifying human remains as "male" or "female" (xn--pourunecolelibre-hqb.com)
UP