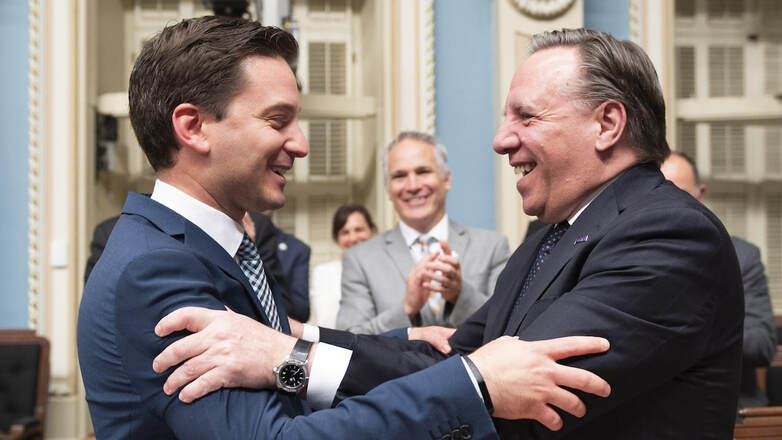 After a busy weekend for Quebec parliamentarians, the government of the Coalition avenir Québec (CAQ) passed its Bill 21 on the secularism of the state under gag on Sunday night, adding some details on the sanctions that will be applied to his offenders.

The members of the CAQ had done the same the day before with Bill 9 on immigration.

At the end of the day, on Sunday, amendments were made to the wording of the bill by the CAQ House Leader and Minister of Immigration, Simon Jolin-Barrette.

"The police of secularism! denounced Liberal MP Marc Tanguay in the House at the time of tabling this amendment. The organization must comply with any other measure required by this policy. "

The government has also added in its law that "everyone has the right to parliamentary, governmental and judicial institutions as well as secular public services".

Minister Jolin-Barrette has also clarified a little more sanctions to which the offender is exposed, always by amendment. "The employee of the legislated state is subject to disciplinary measures or measures that are already provided for in the performance of his duties," reads.

The Liberal members, who are the official opposition, have spoken out against these punishments. They took the opportunity to refer to the words of Prime Minister François Legault, who suggested in recent days that his bill would contribute to social peace.

"This is not trivial, when I am told that we want to strengthen social peace, we come to touch his own heart," thundered Mr. Tanguay.

In his closing remarks, Minister Jolin-Barrette reiterated that he would have liked this "long-awaited Quebec bill" to pass without a gag order. But, he said, the Liberals were so opposed to it that they even voted against his title - the State Secularism Act - during his study.
"You will understand that it was difficult to get him adopted," he said.

He further described the new law as "an approach consistent with Québec's historical path towards religion, which has been resolute, but also gradually."

"The measure allows for a smooth transition to secularism," said the Minister of Immigration.

Well known for her opposition to the CAQ bill on secularism of the state, Liberal MP Hélène David, spokesperson for her party in terms of secularism, has unveiled the substance of his thought just minutes from the adoption.

We add not only the insult to the injury with these amendments, but we add the unacceptable.
Disciplinary measures, law enforcement officers, it's hard to go further in shame and sadness.

Minister Jolin-Barrette could have gone down in history and passed an important bill for Quebec, she said, but by explicitly placing secularism in our laws, "he preferred to go too far and restrict access to employment of skilled and dedicated workers. "

"Quebec will remember that from today, our own, that of all Quebeckers, has shattered," she concluded.

Ms. David was warmly applauded by her Liberal colleagues, who all stood up to shake her hand. 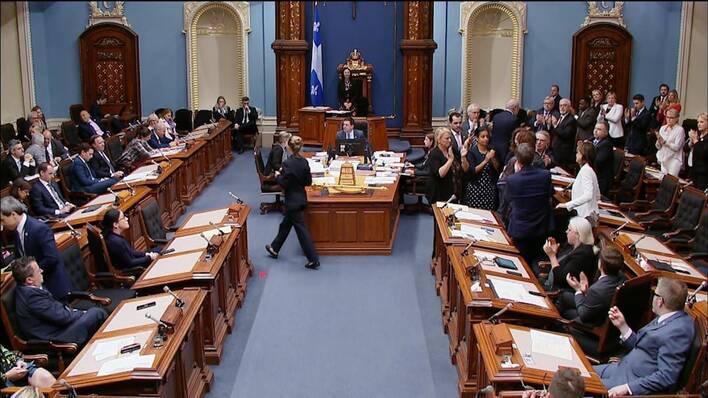 Liberal MP Hélène David, on the right, is surrounded by several of her colleagues who came to congratulate her for her speech delivered shortly before the adoption of the state secularity bill on Sunday night. Photo: Radio-Canada

It was then the turn of solidarity MP Sol Zanetti to make his final remarks. He chose to speak to people affected by the new law, people "mostly from the immigration" who "chose Quebec to take root, build their future and our future."

He read - even sang - a poem by Gaston Miron "written to give courage" after the defeat of the yes in 1980. "It will not always happen. We will enter where we are already. It will not be possible, because there is no question of dropping our hope. Start from scratch because we are nothing else. So where are we going, what are we doing? He notably sang.

In turn, the Parti Québécois then obtained a right to speak, which was paid by its interim leader, Pascal Bérubé.

The Parti Québécois MPs are joining the government for adoption, he said. "We do it according to our convictions, with the feeling that we could have done better, but especially with the feeling that it is an important piece that is the beginning
of a new affirmation of Quebec through its collective choices", added Mr. Bérubé.

Government says no to opposition

The original document was tabled in the House on March 28.

The state secularity act will prohibit many categories of state employees from wearing religious symbols during the performance of their duties: judges, in particular, as well as police officers, Crown attorneys, prison guards, principals and primary and secondary public sector teachers.

Current employees will have a vested right as long as they hold office.

During the study of the bill in the afternoon, the Liberals wanted to extend this grandfathering clause to post-secondary students in the affected fields, such as educational sciences, police techniques, and so on.

Minister Jolin-Barrette closed the door to the amendment, arguing that "acquired rights apply only to people in employment".

Also, the opposition wanted the law to provide for a regulation that would clarify its implementation
including guidelines on the determination of what a religious sign.

The Caquist government did not show any opening on this proposal, which was not put to the vote.
No way back, argues Legault

At the beginning of the day, Sunday, the Prime Minister also predicted that no one will dare to go back on the prohibition
of religious symbols for people in positions of authority.

"My prediction is that the Liberals, the PQ, anyone, [...] they will not change this law," said Francois Legault, pointing out that he does not believe in any event, that one or other of these parties will be in power in five years, at which time the notwithstanding clause will expire.

If he was to take power in 2022, the Liberal Party of Quebec (PLQ) did not hide his intentions.
"There is a good chance that we will want to repeal it," said Hélène David.

Until then silent on this subject, the Minister of Justice, Sonia LeBel, left her reserve on Sunday, and supported
"loud and clear" the principle of secularism.

I believe it, "said the first legal adviser to the government.

Ms. LeBel did not want to speak on the issue of possible court challenges.