Americans are experiencing a cultural realignment 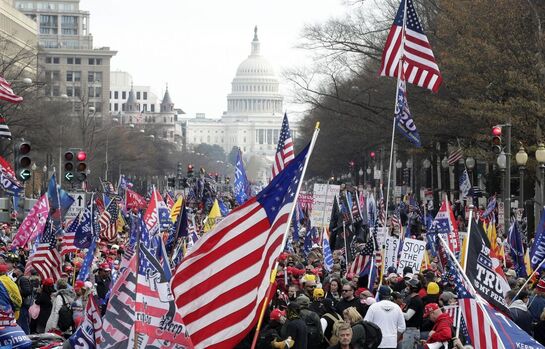 From parents outraged by teaching their children Critical Race Theory, to pro-life millennials; from union members to Latinos who voted for Donald Trump, across the United States, Americans are questioning what is taught in their schools and standing up for their Constitution, their values ​​and their story. The retreat of the leftists is evident everywhere in the United States and will give them a hard time. During the Lightning hockey game against the Montreal Canadiens last night, the crowd at Amalie Arena in Tampa Bay was seen proudly singing the American national anthem. Sean Hannity even showed this event at the end of his Fox News show.

Are we witnessing a cultural realignment?
Recently we have seen reports in the newspapers of average Americans rejecting leftist initiatives.

Taken in isolation, these reports are entertaining, but not really overwhelming. Except that seen as a whole, they may form a model.

Are we seeing the first signs of a cultural realignment?

Recently, women protested that a California spa was allowing " perfectly normal women with a penis " to use the women's facilities. The demonstrators quickly pointed out that they were Democrats and that they supported LGBTQ rights (an acronym used to describe lesbian, gay, bisexual, trans, queers). But it turns out there's a limit to the amount of leftist nonsense even Democratic voters are willing to accept.

Equity for people with gender confusion seems compassionate in theory. In reality, she makes it easier for naked men to bathe with our six-year-old daughters - which inspires a different emotion than compassion.

“ Perfectly normal women with penises ” who compete in women's sports are also making headlines. The left has told us that we have to accept each person's perception of reality, even if that person is somewhat confused about their gender. But “ perfectly normal women with penises ” participating in women's sports competitions have illustrated the absurdity of persisting down this path.

Why not let heavyweight boxers identify themselves as lightweights and let them beat people up to half their size?

After a year of this nonsense, we begin to see that there can be many perceptions, but that there is only one true reality.

Are feminists beginning to see that their movement has made them slaves to liberalism and that they have become servants of leftism?

The debate over Critical Race Theory (TCR) taught in our schools has erupted across the country.

Protests against the TCR at school board meetings became loud and contentious. A number of states have even passed laws banning it in public schools. It is all well and good to want to eliminate racism until it comes down to teaching our children self-hatred. Teacher unions and many school boards must now defend themselves against protesting parents.

The same people who told us a few years ago that every child should receive a trophy - because we have to encourage their self-esteem - now tell us that we have to teach our children that they are guilty of mistakes made there. 200 years.

They betrayed each other. Their goal is not to teach children, but to indoctrinate them.

The right to own weapons

Over 60% of counties in the United States have now adopted some form of local 2nd Amendment protection legislation.

I like the guarantees. The 2nd Amendment is our guarantee that our government will never be able to turn our military against us.

It is good to know that this guarantee is supported by 61% (and more and more) of our local governments.
It seems that our local communities and state governments still believe that the Constitution holds all its meaning and that they defend it - not against foreign enemies, but against internal enemies.

It is too bad that more of our federal public servants do not remember this part of their oath.

Union leaders continue to support the Democrats, but their members are definitely changing sides - and the election results prove it. After decades of losing jobs because of bad trade deals negotiated by their so-called advocates, union members are realizing that they have been taken for pigeons.

Donald Trump gave them a glimpse of what can be done by putting forward an "America First" ideology - and they like it.

An unprecedented 38% of Latinos voted Republican in the last election. Nothing creates a cold sweat for Democrats more than realizing that one of their designated intersectionality groups is actually capable of thinking for itself.

As it turns out, Americans from elsewhere still value freedom, the nuclear family, and the availability of jobs.

They love what they came to America for, not what the leftists are trying to do with it.
This will become a problem for the supporters of socialism.

Even attitudes about abortion are slowly starting to change. Millennials in the 18-29 age group are now 52% in favor of banning abortions after 20 weeks. Only 44% of 50-year-olds agree with this ban.

Of those who identify as pro-choice, only 20% consider this to be an important issue.

With enthusiasm being a leading indicator of cultural change, the future looks much brighter for unborn babies. No one expected a pro-life stance to be taken by this generation of young adults - surprise! Democrats may have to revise
the test that determines who is really on their side.

Andrew Breitbart has said this famous phrase: “ Politics is downstream of culture. "

Political attempts to force people to adopt a certain culture are tyranny, plain and simple.

In a free society, politics will always be a reflection of culture.

Are we facing a new model of behavior?

Are Americans taking back control of their schools, their Constitution, their values ​​and the narrative of their history?

If the leftist retreat that we've seen in recent months continues, it is going to have big problems - and it couldn't happen to a nicer bunch of budding dictators.

* John Green is a political refugee from Minnesota, who now resides in the town of Star, Idaho. He is a retired engineer with 40 years of experience in the areas of product development, quality assurance, organizational development and corporate strategic planning.