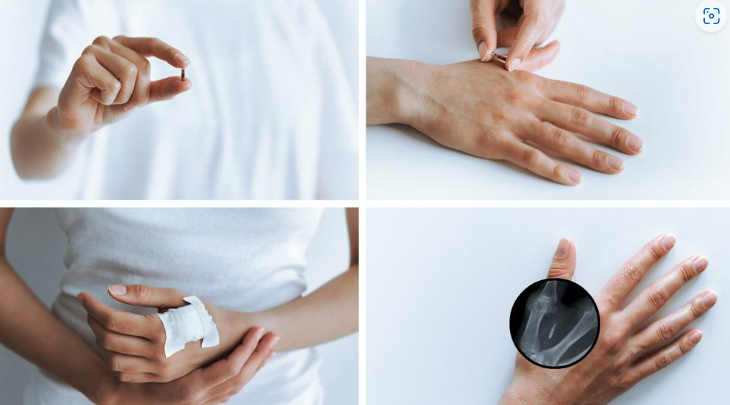 A woman from Las Vegas, Nevada has garnered more than 3 million followers on social media for showing what she can do with a microchip implanted in the back of her hand.

Burgundy Waller has called her husband a "tech genius." She had a chip implanted in her hand a little more than two years ago. It serves as a key to the couple's mansion, The Daily Mail reports. Her husband programmed the chip for her.

Waller is known as "The Chip Girl" in her TikTok videos. She shares what the chip can do, like unlocking doors, drawers, closets, and other storage areas throughout their lavish home just by touching them.

​The device uses radio frequency identification to respond to different objects.
In one video, Waller contends that getting chipped means "never having to carry or worry about losing her key."

In another video, she reveals her husband had an even more advanced chip implanted in his hand. His chip can store information, including his social media accounts and websites.

She also explained how another version of the chip could store her credit card information, which is something she says she wants.

"Not fair, I have the old model," she joked in another video. "My hand is only a key, guess it's time for an upgrade."

As CBN News reported in May, implantable chips in humans are not new, but for the last several years,
the push to market them to a dubious population has escalated.

A company in the United Kingdom has developed a new chip that allows you to pay on the same reader as a credit card. When a person with an implanted chip wants to pay for a product or service using a credit card reader, they simply place their hand with the chip next to the card reader and the payment is made.

While some companies have implemented similar chip implants for internal company functions, the British-Polish firm called Walletmor says that last year it became the first company to offer them for sale to the general population, according to the BBC.

Even though a little more than half of 4,000 people across the U.K. and the European Union told a survey last year they would consider having a chip implanted, they also brought up privacy and security issues.

As CBN News has reported, potential privacy concerns are already being raised about the ongoing development of such technology in implantable microchips that are being injected into the hands of thousands of willing participants across Europe.

"There is a dark side to the technology that has a potential for abuse," Nada Kakabadse, professor of policy, governance, and ethics at Reading University's Henley Business School told the BBC. "To those with no love of individual freedom, it opens up seductive new vistas for control, manipulation and oppression."

"And who owns the data? Who has access to the data? And, is it ethical to chip people like we do pets?" she asks.

The result, she cautions, could be "the disempowerment of many for the benefits of a few."

Critics are sounding the alarm about ongoing developments in tracking technology for humans.

In addition, an ingestible pill with such tracking technology was created and approved in 2017 by the U.S. Food and Drug Administration. The pill, which is intended to treat mental illness, is called Abilify MyCite.

An edited viral video of Pfizer's CEO Albert Bourla talking about the technology involved with the tracking pill came to light during the World Economic Forum in Davos, Switzerland in 2018. In the video, Bourla praises the development of the biological chip embedded inside the pill that, when swallowed, dissolves in your stomach, sending a signal that the medication was taken.

Legitimate questions remain about the future use of this technology. For example, could such a wireless pill be used one day by authorities to track other activities?

Social media users in May scorched Alibaba Group U.S.A. President J. Michael Evans after he told an audience at this year's World Economic Forum that his company was developing technology for consumers to measure their whole carbon footprint.  Alibaba Group USA is a subsidiary of Chinese internet giant Alibaba.

"Stay tuned. We don't have it operational yet. This is something that we are working on," Evans added.

There are clear implications beyond the function of simply being a "platform for consumers" to track their environmental impact. It's another high-tech method for tracking human behavior, and China is already widely known to be violating the human rights of its citizens with a social credit system of tracking. So, the fact that the technology is coming from the Alibaba Group is raising alarms.

One Twitter user sounded an alarm about the idea saying, "They are going to put a cap on the carbon you can consume, per day, and you will have to watch what you do to not go over it. They are going to force us to live like serfs."

Conservative commentator J.D. Vance, who's running for a U.S. Senate seat in Ohio, also tweeted, "Imagine flying a private jet to a conference of the world's most powerful people and then lecturing other people on their carbon footprint."

Another user explained why so many people are concerned: "Because it isn't about the carbon footprint at all."

As CBN News reported in February, the Bible's New Testament warns of the "Mark of the Beast" – a key sign of the End Times before Christ returns. But how can Christians recognize the mark when it becomes reality?

In a recent video on YouTube, Evangelist Ray Comfort examines that question by looking at Revelation 13:16-17.

"He causes all, both small and great, rich and poor, free and slave, to receive a mark on their right hand or on their foreheads, and that no one may buy or sell except one who has the mark or the name of the beast, or the number of his name." -- Rev. 13:16-17 NKJV

In the video, Comfort, the founder of Living Waters Publications and the ministry
The Way of the Master, explains the mark is not a vaccine or a virus.

"But the scripture gives us the reason for the mark, it is for commerce. Those who don't have the mark will not be able to buy or sell," the Bellflower, California-based preacher said.

Clearly, that raises concerns about microchip implants that could one day be used to control people's ability to buy and sell.