Thanks to a CitizenGO campaign
Hungary, Coca-Cola fell back

return
I send you this email to inform you that the mobilization of a "small structure"
as CitizenGO can beat the world's most powerful companies.

That's what happened in August in Hungary, where thanks to a campaign of CitizenGO Hungary, Coca-Cola fell back. Explanations.
In early August, Coca launched a campaign of advertising posters throughout Hungary highlighting homosexual couples,
as you can see here. 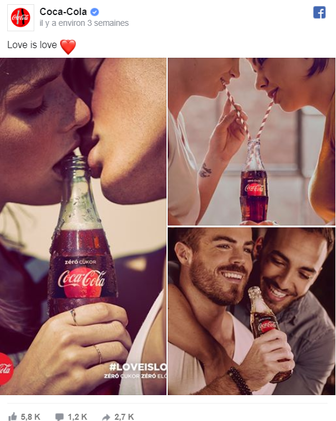 CitizenGO Hungary quickly launched a campaign to request the removal of these advertisements. Hungary, a conservative country, where the political class assumes its conservatism immediately followed the CitizenGO campaign and also seized the subject.
MP István Boldog, a member of the conservative right-wing party FIDESZ, posted on his Facebook page:
"I stand out from the Coca-Cola poster campaign. As long as they do not remove their provocative posters from Hungary,
I will not consume their products! They call on Hungarians to do the same.
The brand has initially reacted with the usual elements of language:
We defend "diversity, inclusion and equality ... We believe that heterosexuals and homosexuals
have the right to love the person they want, the way they want. "
Faced with the success of the petition, the critics of many elected officials, Coca Cola has finally withdrawn its posters
to replace them with rainbow posters.
Many French-language media relayed this information, while critiquing CitizenGO and Hungarian society.