RETURN
'Why is [the Ford government] using taxpayer dollars to pay for adult men dressed as women to "perform" for children?'
​ 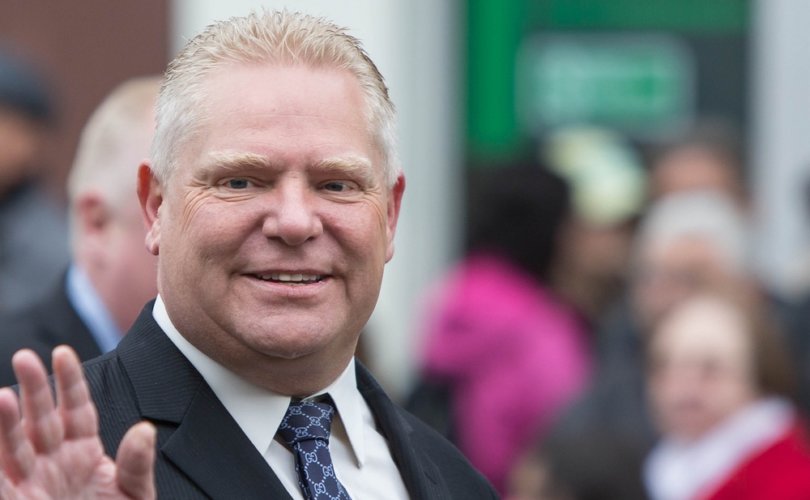 The event, titled “Jingle Bell Rock,” took place last night in Kitchener, Ontario, and according to a flyer that was circulated on social media, was an “All ages drag night” which featured performances from three men dressed as women.

The flyer also included a note at the bottom that read “Funding provided by the Government of Ontario,” which quickly become a source of outrage for social conservatives.

Former Ford Member of Provincial Parliament (MPP) and current leader of the New Blue Party, Belinda Karahalios, reacted to the news by slamming her former government on social media, writing: 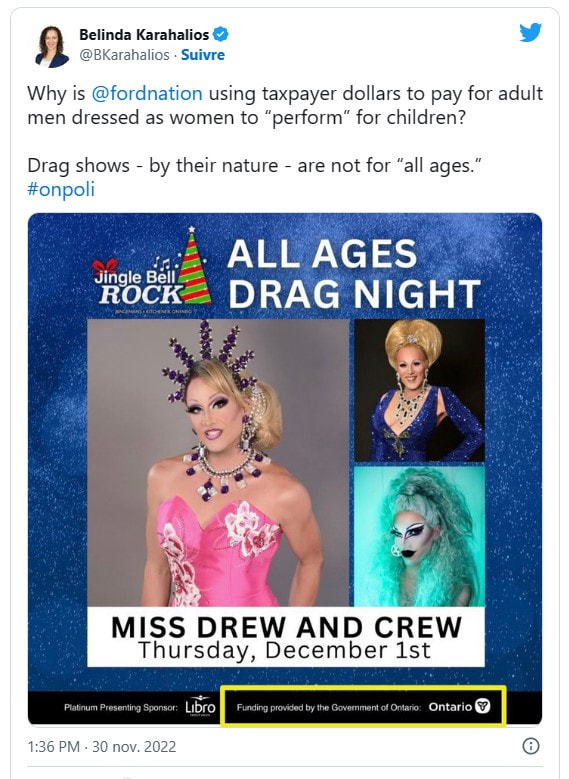 Other social media users also chimed in to share their concerns, with one user writing “Drag shows aren’t for any ages,”
and another adding, “This is child abuse.”

The Ford government’s funding of a drag show for children seems to be in line with the larger push by the Canadian federal government to use taxpayer dollars to normalize various facets of the LGBT agenda, despite such efforts being in contradiction
to the deeply-held religious beliefs of many citizens.

Just last week, Prime Minister Justin Trudeau appeared on a TV show called “Canada’s Drag Race,” at which the prime minister seemed to imply his presence was an intentional part of his government’s mission.

“[I]t has been an incredible pleasure to be part of fighting the good fight on the right side,” Trudeau stated after being thanked by the show’s host. “It is about respecting people. Can we move beyond ‘tolerate’ and start embracing and loving and accepting and learning from and being challenged by? That’s how you build a resilient society. That’s what we’re trying to do in Canada, and we’ve got a lot of work still to do.”

Since coming into power in 2015, Trudeau’s federal government has been committed to promulgating the LGBT narrative,
oftentimes through large sums of public money.

In 2017, Trudeau gave $15 million to “memorialize” the Canadian government’s “historic discrimination” of homosexuals.

In 2019, Trudeau announced $30 million to be spent over a five-year period to
push homosexuality and transgenderism in developing countries.

In August of this year, Trudeau added up to $75,000 in coverage for so-called “gender-affirming care” to the Public Service Health Care Plan for government workers, and later that same month pledged a whopping $100 million dollars in funding to LGBT groups across the country, with 75 percent of the money marked for local community organizations focused on “inclusion.”

Reacting to the Trudeau government’s ever-growing list of LGBT initiatives – and the tendency for conservative politicians to either endorse or ignore the efforts – social commentator Jonathon Van Maren wrote:

The LGBT movement conquered cultural territory under the banner of ‘tolerance’ – and once they established dominance, they immediately began to demand affirmation and praise. If you think that is an exaggeration, consider the fact that it is controversial in Canada for a politician – even a Conservative one – to decline attendance at ‘pride’ events. They are expected to show up
and applaud what they see there. Tolerance is for bigots.