return
When you affirm someone in his homosexuality, you are doing the opposite of 'loving' him. 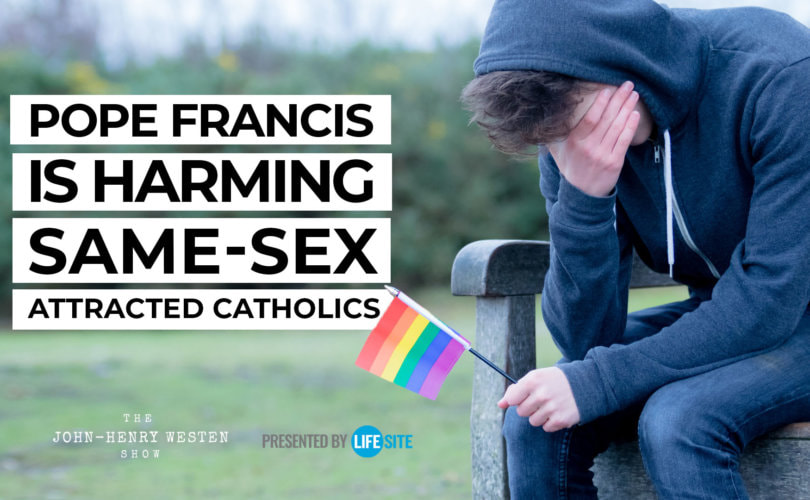 (LifeSiteNews) — Pope Francis recently endorsed same-sex ‘civil unions’ aboard the papal plane. This interview with LifeSite’s Washington, D.C. correspondent Doug Mainwaring is from 2019 but is as relevant as ever. Doug discusses his past life as an active homosexual and how he came back to the Catholic faith. Enjoy!
Pope Francis is causing massive confusion on what the Church teaches on homosexuality. Doug told me the Church’s teachings on homosexuality are “a great beacon of light” for those struggling with same-sex attraction. When he was a freshman in college as an 18-year-old, he confessed to a priest that he was same-sex attracted. “My life was saved by God through that priest.” If the priest had told Doug to just go and live out those desires, “I’d be dead from AIDS.” But he didn’t. “He told me the Church’s teachings.”

Doug’s story is truly an inspiration. After the charismatic Catholic community he was involved in fell apart, he and his wife separated, despite having adopted two children together. He lived as a gay man for a dozen or so years and told me, “It was very freeing. I thought, ‘This is great!’”

But slowly he realized that many in the gay community had “adolescent” behaviors and saw others only as “sexual objects.” He found his way back to God, but only after realizing “I did tremendous harm to my kids and my wife.”

Doug told me that his long, “miraculous” journey back to God involved a lot of searching and looking into non-Catholic religious groups. But he said the Catholic Church’s teachings ultimately were what he needed to hear.

Those who think they are nice when they “affirm” someone in his homosexuality are not loving that person, he told me. The “opposite is true.” Same-sex attracted persons “need to hear the truth…we need to hear about sin.” There is “so much joy not giving in to the weakness of the flesh…but demonstrating you have mastery over it.”

Doug said this is why Pope Francis and others are doing such a “tremendous disservice” to homosexuals. It’s “dangerous,” he said, when the pope doesn’t call on persons who are same-sex attracted to leave behind that lifestyle. “They need affirmation as children of God…not affirmation in their deep-seated tendences.”