RETURN
Introduced to the Florida House by Rep. Joe Harding (R), the legislation seeks to 'reinforce the fundamental right of parents to make decisions regarding the upbringing and control of their children.' 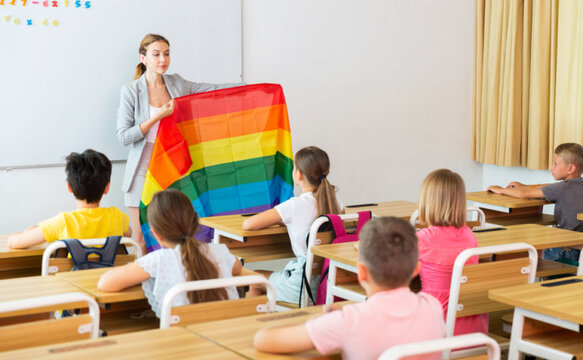 TALLAHASSEE, Florida (LifeSiteNews) — Florida’s House of Representatives passed a bill Thursday banning school teachers from promoting discussions within the classroom regarding gender identity and sexual attraction for children in the third grade and younger.

The bill, HB 1557, expressly prohibits “instruction by school personnel or third parties on sexual orientation or gender identity … in kindergarten through grade 3 or in a manner that is not age appropriate or developmentally appropriate,”
granting parents the ability to sue schools which violate the order.

The House voted 69-47 in favor of the “Parental Rights in Education” bill, meaning the legislation will now make its way to the Senate, where a successful vote would likely put the bill into effect for the 2022–2023 academic year.

Introduced to the Florida House by Rep. Joe Harding (R), the legislation also seeks to “reinforce the fundamental right of parents to make decisions regarding the upbringing and control of their children,” ensuring transparency between the school district and parents regarding both what is being taught in schools and any developments in their child’s “mental, emotional, or  physical health or well-being.”

Although comfortably passing through the Florida State House with Republican support, the bill faces fierce opposition from LGBT lobbyists and Democrats, including in the White House, who have maligned the legislation as the “Don’t Say Gay Bill.”

President Joe Biden announced his opposition to the bill earlier this month, posting a tweet in which he called the bill “hateful” and a threat to child “protections and safety.” 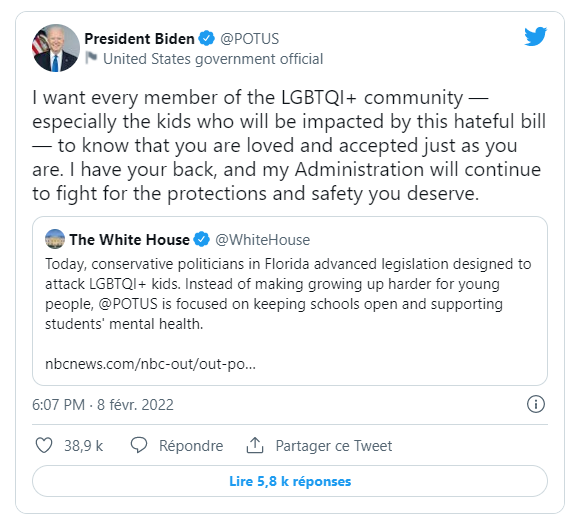 Biden was joined by White House Press Secretary Jen Psaki, who said that, as a parent, she “hopes that our leaders will ensure their child’s safety, protection, and freedom” while denouncing the Parental Rights in Education bill as an
“attack” on children “who are already vulnerable to bullying.”

Harding explained to legislators on the House floor, however, that “[c]reating boundaries at an early age of what is appropriate in our schools, when we are funding our schools, is not hate,” but rather “it’s actually providing boundaries, and it’s fair to our teachers and our school districts to know what we expect.”

In comments to Fox News, Harding explained that, if successful, the bill will inhibit school districts from teaching “gender and sexual orientation and what that means and getting into the weeds on that,” deeming the practice “not age appropriate.”

Harding also released a video response to Psaki on February 9, the day after she delivered her comments at a press conference, accusing the Biden administration of “distorting the truth” about the bill.

Countering Psaki’s claim that Republicans have diminished the perception of safety among children with the recently passed legislation, Harding said that this objection, alongside being a false interpretation, has “nothing to do with this bill” and reiterated the intention that parents have “access to their kids’ school records more easily,” as well as not allowing a school district to “encourage classroom discussion about sexual orientation or gender identity in primary grade levels.”

“I don’t think it’s controversial to empower parents … we want to make sure that parents are kept in the loop,” Harding added.