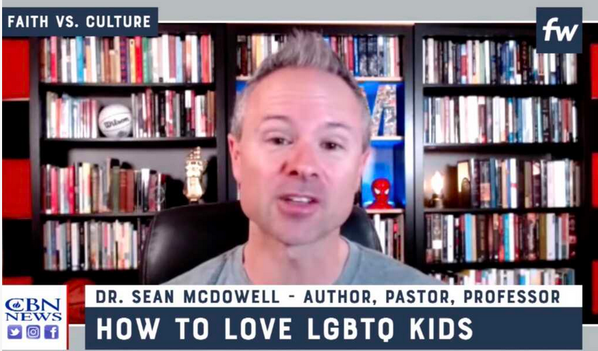 There are few things that can be more anxiety-producing in this life than when parents receive unexpected news from their children, particularly when it has to do with their sexuality.

The truth of the matter, though, is such conversations are becoming increasingly unavoidable. Just look at the numbers: TikTok is one of the most downloaded apps and trafficked platforms in the world, and in 2021, transgender-themed content dominated with a stunning 26 billion views. Furthermore, 21% of Generation Zers (born between 1997 and 2003) consider themselves part of the LGBTQ community, Gallup found.

While having these conversations is always tricky and must be approached with the utmost care, theology professor and apologist Sean McDowell recently revealed on CBN’s “Faith vs. Culture” an important first step for parents.

The trick, McDowell said, is preparation.

Much of the battle centers on parents who don’t realize just how inundated their children are with sexual messages and are aloof to the fact that their kids are silently struggling with same-sex attraction.

“Preparing to respond with grace if this happens, I think, is one of the best things we can do to have
a longterm relationship and impact on our kids,” McDowell added.

Watch the full ‘Faith vs. Culture’ episode:
McDowell’s advice was prompted by a recent conversation he had on his YouTube channel with Jim Domen,
author of “Not a Mistake: A Parent’s Hope for a Gay Son.”

Domen, now a pastor, married to a woman, and the father of three children, shared with McDowell his experience when he told his parents that he struggled with same-sex attraction.

“My dad wept,” he recalled. “I had never seen my dad cry before. He wept. And I didn’t know what was going on — I’d never seen him cry before. The beautiful thing, what he told me when he composed himself, he said, ‘Son, you have been dealing with this issue for all these years, and we weren’t able to help love you. You dealt with this all by yourself.'”

Speaking with CBN’s Faithwire, McDowell said he was taken aback by Domen’s recounting of his father’s reaction.

“What surprised me about it is, when he said his dad ‘wept,’ my first thought is, ‘Oh, my goodness. He’s so torn up that his son has same-sex attraction and feels like he’s a failure because of that,” McDowell explained. “[S]adly, that is how many Christian parents will respond — they’ll look within, they’ll blame themselves, they’ll respond in a way that’s not gracious toward their kids.”

“But his father,” he continued, “was weeping because he realized that his son had been wrestling with this and dealing with this for a long time and he was simply unaware of it. So that heart that came through is just moving and is powerful, the right response.”

McDowell even credited Domen’s ultimate return to Christianity and biblical sexuality, in part, to his dad’s loving
response to his child’s struggle with same-sex attraction.