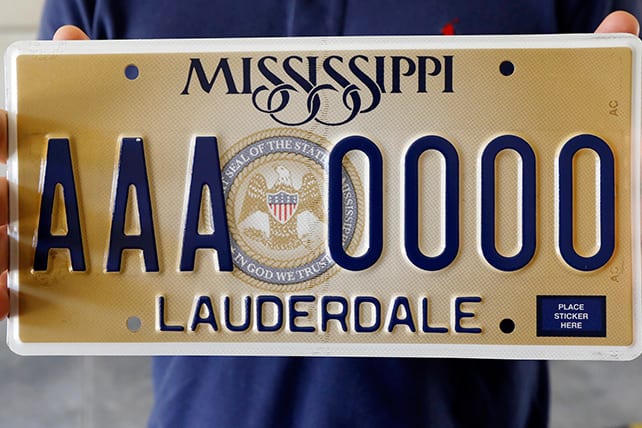 (RNS) — Atheist and humanist groups are suing Mississippi over the state’s “In God We Trust” license plate, calling it unconstitutional and seeking alternatives that don’t require additional fees for Mississippi drivers.

“The phrase ‘IN GOD WE TRUST’ is rooted in hostility toward non-Christians and atheists, intended to convey the message that non-belief in the Christian god is un-American,” according to the lawsuit.

Mississippi’s standard license plate has been sold since January 2019, according to The Associated Press. The center of the plate shows the state seal, which includes “In God We Trust.” Mississippi offers several specialty license plate designs for about $30 extra per year.

The suit says Mississippi car owners have to choose between displaying the state’s standard license tag on their vehicles or paying an additional fee to display a special tag of their choice.

And there are others who don’t have another option besides the standard plate, the suit said, such as those who operate recreational vehicles, motorcycles or trailers, which must display a license tag derived from the standard tag design and with the “In God We Trust” message.

Even car owners who seek to display their own custom alphanumeric combination are forced to do so on the standard tag design with the “In God We Trust” message because paid specialty tags cannot be personalized, according to the lawsuit. Only the standard license plate can be personalized, the suit claims.

The suit notes that Mississippi law provides special tags at no additional fee to active and retired members of the U.S. armed forces, government officials, Purple Heart recipients, sheriff’s deputies, those who are hearing-impaired and others.

The complaint seeks injunctive relief against Chris Graham, commissioner of the Mississippi Department of Revenue, forbidding him from charging additional fees to Mississippi car owners “who do not wish to endorse the state’s ideological message, ‘IN GOD WE TRUST,’ by displaying it on their vehicles.”

The suit calls for an injunction prohibiting Graham from requiring any Mississippi resident — who owns a trailer, RV or motorcycle and who objects to displaying “In God We Trust” on it — to obtain a license tag derived from the standard tag with the religious message.

The lawsuit also wants those who seek to customize their plates to be able to do so without having to use the “In God We Trust” standard tag.

American Atheists, in a statement, lambasted Gov. Tate Reeves for championing the Senate’s efforts to put “In God We Trust” on the state seal back when he was a lieutenant governor in 2014.

In a subsequent campaign for governor, Reeves appeared adjusting such a license plate during a 2019 commercial in which he equated “In God We Trust” with Mississippi values.

BY Alejandra Molina
ChurchLeaders.com
https://translate.google.com/translate?hl=en&sl=auto&tl=fr&u=https://churchleaders.com/news/400159-atheist-mississippi-in-god-we-trust-license-plate.html
UP