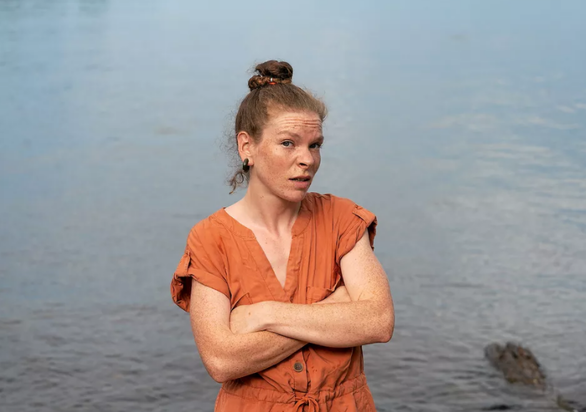 Claudine Lacroix is ​​not modest, she agrees. However, she does not seek to provoke, she argues, bathing topless is a matter of comfort, that's all. Friday, at the beach of Lac Héroux, in Saint-Boniface, heatwave helping, she therefore chose to drop her "top". This was apparently too much for local mores. “Did you know that nudism is prohibited on municipal beaches? I took your license plate number. Next time, it might be the police, ”a passerby called out.
EStill upset by her mishap, Monday morning, the young woman maintains that her breasts were covered with a towel at the time of the exchange. “I told her I wasn't naked. She told me that I was earlier, ”she says. Claudine Lacroix says she remained cordial, despite her emotion. However, the incident put an end to the moment of tranquility that she had come to seek while moving away from Trois-Rivières.

“In general, I choose the less crowded beaches. It was the first time that I had done it [topless] on a moderately frequented beach ... that is to say that there was a person who came by every half hour, ”argues the Trifluvienne. “I buy peace. I go to the water's edge to recharge my batteries, not to be harassed. ” Also, to comply, she explains, she tries to hide her chest when people pass by. In addition, the young woman points out that on Friday, she was sitting with her back to the path, out of sight.
Feminist, but not particularly militant - "I go to demonstrations, but it is not me who organizes them", she insists - Claudine Lacroix deplores the double standard. “On a beach, where 100% of the men are shirtless, why don't we choose to be within our rights? A swimsuit top or a bra is really not comfortable, ”she says indignantly. Aware that her practice does not necessarily fit in with Quebec mores, the bather maintains "that it is the right time, in 2021, to ensure that there is less and less discrimination in relation to body and gender. ".

If the incident on Friday shook her a little, Ms. Lacroix does not intend to bend more to social norms. On the contrary, she says, it will have made him think about his rights. “I have a choice to make, and I choose the political claim. Women have the right to have free access to all forms of entertainment, on the same basis and under the same conditions as men, ”she said. As for the beach at Lac Héroux, she intends to return there with friends, "to swim as you are comfortable doing," she assures us.
"Buying peace is no longer a good answer", drops the feminist.

It seems that Claudine Lacroix is ​​not the only one who has recently felt the desire to part with a few pieces of clothing at Lac Héroux. According to residents met on site and who agreed to talk to us, provided they are not identified, public access to the body of water has gained popularity since the start of the pandemic. And the habits of visitors do not always match the family character of the place, some deplore. 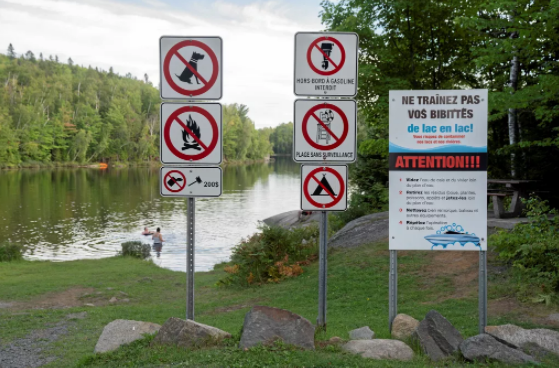 everal regulations are posted at the public beach of Lac Héroux, but none mentions any dress code.
STEPHANE LESSARDAbout seven kilometers from the village core, more than a hundred dwellings surround Lake Héroux. If the public beach which borders it occupies barely ten meters wide, the comings and goings are important there, we observe. If some do not take offense too much, others denounce misconduct ranging from "parties" on the beach to the cutting of trees in the riparian strip - prohibited by regulations - or open fires in period of drought. The taste for swimming in its simplest device would perhaps be too much drop, one notices. “I don't mind that, but there are several small families with children around, it doesn't suit everyone,” argues one of the residents we met.

It should be noted that during our visit, at the end of the afternoon, a few families, at most, took advantage of the place in a rather calm atmosphere. While some regulations are posted, none mentions any dress code.

The issue of women's right to go topless in public periodically resurfaces in the news. It will be remembered that it made the headlines in 2017, when the operators of the Village Vacances de Valcartier banned the practice. Complaints had been filed, some claiming more freedom, others, conversely, calling for more modesty. The company changed its mind in 2019, declaring that "there is no distinction between men and women, everyone is welcome [...] in Valcartier. "

The Saint-Boniface authorities did not respond to our calls. However, according to municipal regulations available online, everything suggests that elected officials have never ruled on the issue. The only article that deals with indecency on the public highway forbids urinating there, nothing more. No mention is made of nudism or appropriate attire on municipal beaches.

For criminal lawyer Vincent Montminy, the issue is in a gray area and is a matter of interpretation. “It's neither legal nor illegal, it would be at the discretion of an agent. As soon as there is a sexual goal, it becomes illegal, ”he observes. The simplest case is that of breastfeeding, where clearly, no sexual connotation can be evoked, notes the expert.

As for swimming, people may be offended, continues the lawyer. A peace officer could even step in and make an arrest. It would ultimately be up to a judge to decide whether charges can be laid. However, warns Me Montminy, “it is not because a woman has bare breasts that she can be criminalized. It will depend on whether there is a notion of sexuality linked to that. If there is not,
there is no problem, if there is, there is a problem, ”he says.

In addition, legislative changes could shed new light on the issue. "Recently, there were changes by [Prime Minister] Mr. Trudeau for what is called in Europe" the monokini ", which is quite common, is not criminalized here," says Vincent Montminy. It will remain to integrate said modifications into local customs.