RETURN
Joe Biden said Friday that he does not believe that life begins at conception, contradicting his past statements
​and the teachings of the Catholic Church. 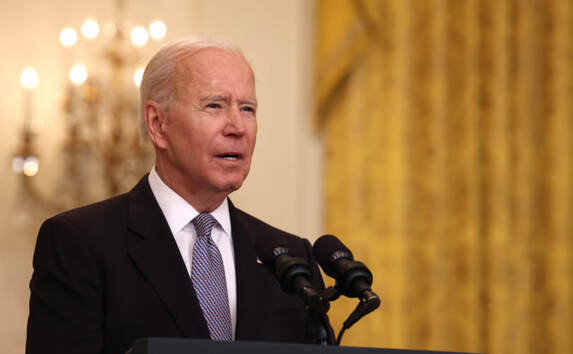 WASHINGTON, D.C. (LifeSiteNews) – Joe Biden on Friday told reporters that he has instructed the Department of Justice to look for ways to block a near-total abortion ban in Texas that took effect on Wednesday. Biden, who has repeatedly described himself as a “devout Catholic,” also revealed that he does not believe that human life begins at conception, reversing a position he previously held and blatantly contradicting fundamental Catholic teaching.

During a press conference at the White House, Biden noted that he has asked his Justice Department to investigate whether the federal government can restrict a provision in Texas’ new fetal heartbeat law that allows private citizens to sue anyone who facilitates an abortion after six weeks of pregnancy.

“I have been and continue to be a strong supporter of Roe v. Wade, number one,” he said. “I was told that there are possibilities within the existing law to have the Justice Department look and see whether or not there are things that can be done that can limit the independent action of individuals enforcing a state law. I don’t know enough to give you an answer yet. I have asked that to be checked.”

Biden described the enforcement mechanism of the pro-life law as “pernicious” and “almost un-American,” saying “the Texas law … sort of creates a vigilante system.” “It just seems – I know this sounds ridiculous – it’s almost un-American,” he said, though the FBI two months ago called for Americans to monitor their family members and report “suspicious behavior” to the government as part of the Biden administration’s focus on so-called “domestic extremism.”

Texas’ heartbeat law, the Texas Heartbeat Act or S.B. 8, bans abortion once an unborn baby’s heartbeat becomes detectable, typically around six weeks into pregnancy. The novel approach of the legislation empowers citizens, rather than the state, to bring legal action against abortionists and anyone else who helps a mother abort a baby with a detectable heartbeat.
Violations can result in fines of at least $10,000 per abortion.

The Supreme Court on Thursday rejected an emergency petition by abortion businesses to halt S.B. 8, letting the measure stand for now, though the ruling does not prevent further challenges in other courts. The unprecedented pro-life law is the strictest to take effect in the U.S. since the Supreme Court’s Roe v. Wade decision that legalized elective abortion nationwide nearly 50 years ago.

In a White House statement yesterday, Joe Biden called the high court’s move not to block the Texas heartbeat law an “unprecedented assault on a woman’s constitutional rights under Roe v. Wade” and vowed a “whole-of-government effort” against S.B. 8 in response. He said that he instructed the Justice Department and the Department of Health and Human Services “to see what steps the Federal Government can take” “to ensure” that women can continue aborting their babies in Texas and to investigate “what legal tools we have” to stop enforcement of the law.

‘Catholic’ Joe Biden rejects Church teaching on lifeBiden, a self-professed Catholic, also revealed at his press conference earlier today that he does not believe that life begins at conception, despite his past statements to the contrary and the Church’s unambiguous teaching on the subject.

“I respect those who believe life begins at the moment of conception,” he stated. “I don’t agree, but I respect that. I’m not going to impose that on people.”

Biden’s comments mark a reversal from the stance he publicly took as vice president. “Life begins at conception, that’s the Church’s judgment,” he said in a vice presidential debate in 2012. “I accept it in my personal life. But I refuse to impose it on equally devout Christians and Muslims and Jews, and I just refuse to impose that on others.”

“It’s a decision between them and their doctor, in my view, and the Supreme Court. I’m not going to interfere with that,” then-Vice President Biden added. He made similar statements in 2008 and 2015.