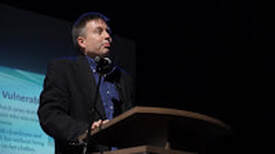 On March 11, the Liberal government, with the support of the Bloc Quebecois (BQ), forced a closure of debate on Bill C-7, Canada's euthanasia expansion bill, and then passed Bill C-7, with the Senate amendment approving euthanasia for mental illness alone,
once again with the BQ supporting the Liberals.

Bill C-7 was introduced in February 2020 as the government's response to the Quebec Superior Court's Truchon decision which struck down the part of the law requiring that a person's natural death be reasonably foreseeable before they could be killed by euthanasia. The government did not appeal the Truchon decision. Bill C-7 goes much further than Truchon required.

You may remember, that parliament passed Bill C-7 in December 2020. Bill C-7 then went to the Senate for further study and a vote.

The Senate amended Bill C-7 to clearly allow euthanasia for people with mental illness and for incompetent people who asked for death by lethal injection in their advanced directive.

What did Bill C-7 do before it was amended?

1. Bill C-7 removed the requirement in the law that a person’s natural death be reasonably foreseeable in order to qualify for assisted death. Therefore, people who are not terminally ill could die by euthanasia. The Truchon decision only required
this amendment to the law, but Bill C-7 goes further.

2. Bill C-7 permits a doctor or nurse practitioner to lethally inject a person who is incapable of consenting, if that person was previously approved for assisted death. This contravenes the Supreme Court of Canada Carter decision which stated
that only competent people could die by euthanasia.

3. Bill C-7 waives the ten-day waiting period if a person's natural death is deemed to be reasonably foreseeable. Thus a person could request death by euthanasia on a "bad day" and die the same day. Studies prove that the “will to live” fluctuates.

Bill C-7 went much further than the Quebec Superior Court Truchon decision and now that parliament has approved euthanasia for mental illness alone, Bill C-7 is much worse.

Bill C-7 will now go back to the Senate for debate and a vote. The Senate may once again amend the bill, sending it back again to parliament nonetheless, the damage has been done.

But there is good news.


Many medical professionals responded to Bill C-7, especially since the law is out-of-control without even providing them with effective conscience protections.

The battle is not over.

Many people have contacted me feeling tired and down. They cannot believe that Canada's government would permit euthanasia for people with mental illness alone. I also feel tired, but never down.

More and more our message is accepting the challenge of caring for our family, friends and neighbours. Protecting the equality and life of people with disabilities and other chronic conditions is about recognizing that we live in solidarity with others.

Caring for and protecting others is based upon recognizing that each human being has equality which
cannot only be recognized by words but by actions.

Death is truly dignified when it is shared with those who care about that person until their natural death.
Euthanasia Prevention Coalition
Alex Schadenberg
https://translate.google.com/translate?hl=en&sl=en&tl=fr&u=https%3A%2F%2Falexschadenberg.blogspot.com%2F2021%2F03%2Fcanadas-parliament-passes-bill-c-7.html&anno=2&sandbox=1
UP