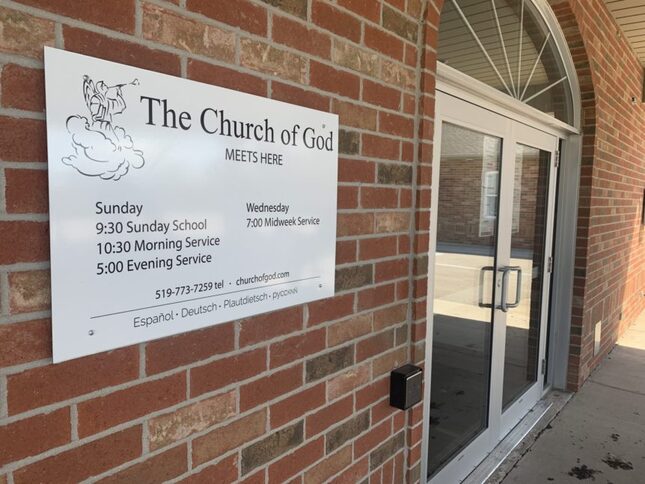 AYLMER: The Justice Centre for Constitutional Freedoms (jccf.ca) today announced that it will file a Charter challenge against the Ontario government, on behalf of the Church of God in Aylmer, Ontario, for its infringement of the church’s freedom of peaceful assembly.
Ontario authorities have threatened to fine the church despite its use of strict “social distancing” measures that eliminate any discernible risk to public health during their “drive-in” church services where people stay inside parked vehicles.

The Church of God, like other congregations across the country, has been prevented from holding in-person services, but found a creative and safe way to bring parishioners back together for worship while ensuring member and public safety. A drive-in service was held for the last three Sundays in their church parking lot, with congregants remaining in their vehicles with the windows up, listening to the service on the radio. Only members of the worship team, no greater than five in number, are permitted outside of their vehicles,
and they also follow strict physical distancing guidelines.

Despite successfully conducting two such services with the approval of police, complaints were made by people who saw a photo of the Aylmer Church of God parking lot, and mistakenly assumed that the congregants were inside the building. The Aylmer Police Chief then threatened,
on April 20, that any further services would be considered a breach of the law and subject to stiff penalties.
Penalties could include fines of $750 to $100,000 and up to one year in jail.

The church held its third drive-in service on April 26, again abiding by all social distancing and public health protection measures.
Police attended on the church’s private property, videotaping all of the vehicles and maintaining an ominous presence.

Although the provincial Crown Attorney declined to proceed with charges on this occasion, the Aylmer Police Chief has declared that this was
an opportunity to “educate” the congregation, and that police investigation could again follow if complaints are received.

The Province’s Order under the Emergency Management and Civil Protection Act prohibits gatherings of more than five people, including
for the purposes of conducting religious services, rites or ceremonies. Despite the fact that many larger stores and businesses remain open, with varying degrees of success in limiting physical contact between customers, churches and other religious
centres have been singled out and effectively closed.

The Emergency Management and Civil Protection Act, like all laws in this country, must comply with the Canadian Charter of Rights and Freedoms, which guarantees citizens that the government will not infringe their freedoms of peaceful assembly and religion, among other fundamental freedoms. The onus is on government, not citizens, to show that the violation of Charter freedoms is “demonstrably justified.”  Where there is
a pressing and substantial concern, such as a declared public health emergency, reasonable restrictions may be imposed, but governments are required to violate Charter rights and freedoms as little as possible, only to the extent truly necessary to protect public health.

The Government of Ontario has had ample time to clarify its Order to ensure that it is not overly broad, and that it does not arbitrarily target religious groups. Recently, the Saskatchewan Public Health Authority reversed its ban on drive-in church services,
after receiving a legal warning letter from the Justice Centre.

The Ontario government, copied on a letter from the Justice Centre to the Aylmer Police Chief last week, has failed to respond,
leaving the church with no option but to commence legal proceedings.

“For many religious communities, coming together to worship is an important part of their faith, and while not perfect, solutions such as drive-in services allow them to exercise their fundamental freedoms of peaceful assembly and religion while still respecting the government’s
orders to protect public health,” says Justice Centre lawyer Lisa Bildy.

“The measures taken by the Church provide much more safety to public health than long lineups of people waiting to get into the liquor store, or sitting in their vehicles bumper to bumper at the Tim Horton’s drive-thru – all permitted activities,” adds Bildy.
“On Sunday mornings, the Church of God has the safest parking lot in town.”

“Citizens across the country are attempting, in a good-natured manner, to comply with the extraordinarily restrictive measures which have been imposed. The Covid-19 outbreak, however, does not suspend the exercise of the Charter. The restriction on religious gatherings,
in which people exclusively occupy their personal vehicles on a parking lot while worshipping, is irrational, unnecessary,
and not a minimal impairment of Charter rights,” concludes Bildy.

The Justice Centre is presently preparing court documents on behalf of the Church.
up