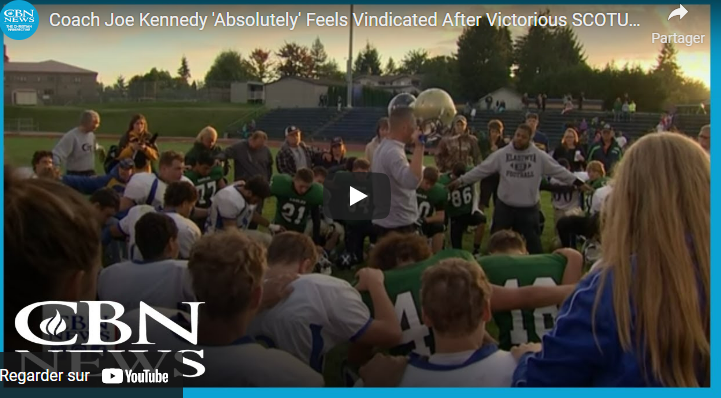 For the fourth time this term, the Supreme Court issued a landmark religious liberties ruling on Monday,
this time protecting a high school football coach's right to pray.

The court's conservative majority has been ruling in favor of religious rights a lot lately, correcting decades
of confusion regarding the role of Church and state:

In this latest ruling for the praying football coach from Washington state, both sides of the Kennedy vs. Bremerton School District case argued it all came down to the First Amendment. In the end, the majority sided with individual religious freedoms over government censorship.


"The First Amendment means that people of faith can be people of faith. They don't have to choose between the job they love and their faith to stay employed," said Coach Joseph Kennedy's attorney, Jeremy Dys, with First Liberty Institute.

In 2015, the Bremerton School District in Washington state fired Coach Kennedy for praying on the 50-yard line after football games. They were concerned that allowing those post-game prayers would come across as a state endorsement of his religion.

Kennedy's lawyers pointed to both the free exercise and free speech clauses of the Constitution to protect the coach's right to pray.

The high court agreed. Justice Neil Gorsuch, writing for the majority side, said, "Respect for religious expressions is indispensable to life in a free and diverse republic—whether those expressions take place in a sanctuary or on a field,
and whether they manifest through spoken word or a bowed head."

In her dissent, Justice Sonia Sotomayor, accused the Court of "eroding religious liberty," for all, by elevating
the religious rights of a school official over those of his students.

Much Broader Implications for Church and State

For decades in religious liberty cases, the Supreme Court referred to a ruling from 1971, Lemon v. Kurtzman, as a framework for dealing with the so-called separation of Church and state under the First Amendment. Now, experts say that complicated legal standard has essentially been eliminated. It means courts will no longer necessarily favor secular interests over religious ones.

"I think it's very clear that the 'Lemon Test' is now no longer good law, that instead, we're going to look at the unique facts in history, the circumstances that have welcomed religion in the public square throughout our country's history," Dys said.

Coach Kennedy told CBN News his faith has sustained him through a long legal battle, now he's ready to get back on the field.

"My faith has grown so much, not just in God and the closeness of that, but the faith through my family, we've become a lot tighter as a family of Christians, and also everybody in the nation. It's just great to see how God works in these ways," Kennedy said.

Four decisions remain to be announced by the High Court during this term, including Texas v. Biden, an immigration case that addresses the "Remain in Mexico" policy. As of now, Wednesday is the last decision day on the calendar. ​
Caitlin Burke
CBNNEWS.COM
Supreme Court Finally Clarifies Church and State Confusion, Making Religious Liberties the Top Priority | CBN News (www1-cbn-com.translate.goog)
UP