The clergy disappointed
with the attitude of Quebec 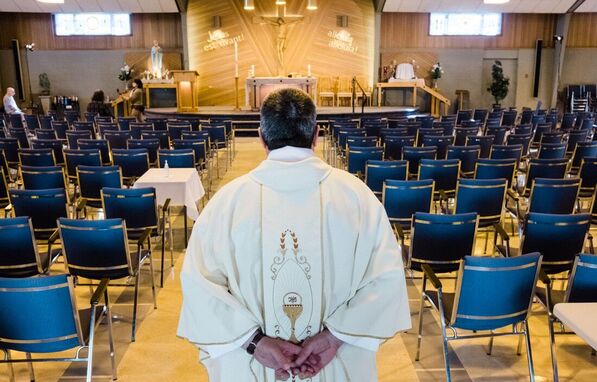 The places of worship will reopen on June 22, after three months of virtual rituals devoid of any collective celebration. This prospect delights all religious communities, but the expeditious and informal communication made by Quebec on Wednesday disappoints and nourishes among them the feeling of having been neglected by the government.

“It was done by the back door. It is a great disappointment. Religious groups in Quebec have been very collaborative in this collective effort to fight the virus. The government specifically asked religious groups to stop their activities, which we did, ”said Bishop  Pierre Murray, secretary general of the Assembly of Catholic Bishops of Quebec.

They expected Prime Minister Legault to officially release. But religious leaders, also members of the Inter-religious Dialogue Table for the Reopening of Places of Worship, learned in the morning that there would be no intervention by the Prime Minister and that we had to trust the measures of the May 15 last regarding the indoor gatherings of 50 people.

“We have done our homework, we have developed protocols to protect our faithful and society in general. We expect mutual respect, "said ex-Imam Hassan Guillet, who would have liked the same consideration as those shown in other sectors of public life reopened one after the other.

It was in response to a question from a reporter that the only public mention was made at the end of the press conference
with the Minister for Education, Isabelle Charest, and the National Director of Public Health, Horacio Arruda ,
relating to the relaxation of restrictions in the world of sport.

Following the formation of the Interfaith Dialogue Table - which brings together representatives of the Catholic Church, the Anglican Church, the Evangelical Churches, different Jewish traditions, different mosques and the Canadian Center for Ecumenism -,
joint drafting work on a reopening protocol has been carried out.

“From there, we expected that it would go to the Prime Minister for the announcement of a reopening. This is where it started to get more and more blurred. We had the announcement last Monday that allowed indoor public gatherings for up to 50 people with other instructions. We wondered if that was the announcement. We checked, we were told no, explains Bishop  Pierre Murray. What also bothers us is that we do not feel understood, it is as if we were compared to a movie theater. "

Louis Bourque, director of the Association of Evangelical Baptist Churches in Quebec (AEBEQ), goes in the same direction. “We were almost ignored. We had to knock on the door several times, send several press releases and emails. It is for this reason that the Inter-religious Concertation Table exists. It didn't get anywhere. "

For Judith Cournoyer, who works in the pastoral leadership team of a parish in Montreal, the announcement was contemptuous in its non-formal character. “We were deprived of our gatherings for 16 weeks, it was a pain. Now that we reopen, we are not even able [to do it] with respect ”, specifies the young woman of 21 years.

However, according to Diego Saavedra Renaud, pastoral worker for several years in Côte-des-Neiges, the context of crisis provoked by the pandemic accentuates the crucial role that a church or a religious institution can play. “The deconfinement will not be a pleasure. It will be very complicated and very expensive, whether we like it or not, ”said the 33-year-old man in passing.

Even if the announcement was deemed “confusing” for the community of the faithful, Rabbi Reuben Poupko, representative of the Council of Rabbis of Montreal, is delighted with the favorable response to the reopening of places of worship.
up