Conversion therapy will be banned in Quebec 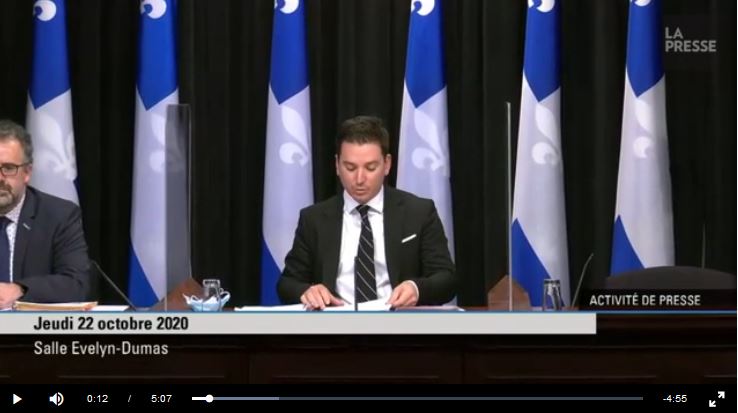 (Quebec) Providing a homosexual person with therapy aimed at transforming them into
a heterosexual will soon be banned in Quebec.
Jocelyne Richer
The Canadian Press
The Minister of Justice, Simon Jolin-Barrette, tabled a bill banning conversion therapy on Thursday,
calling this kind of service “barbaric practices”.

"It is unacceptable that in 2020 this type of therapy is still taking place in Quebec,"
said the minister, recalling that sexual orientation was not a choice.

Bill 70, which consists of only ten articles, clearly states that "any conversion therapy is presumed
to infringe the right to integrity" of the person following it.

People who have undergone this type of therapy in the past, often because of belonging to a religious group, may seek redress, or even financial compensation, for the “bodily or moral” damage resulting from the illegal treatment.

From a legal standpoint, “conversion therapy” is understood to mean any practice aimed at “getting a person to change their sexual orientation, gender identity or gender expression”.

We are not talking here about a person wishing to change sex through surgery.

Bill 70 prohibits anyone, free of charge or for remuneration, from soliciting a person to enter a gender reassignment process.

No professional will therefore be able to offer this type of therapy, under penalty of sanction by his professional order, even at the express request of an adult who would say willingly to change direction.

Minister Jolin-Barrette's initiative follows a similar initiative by the Liberal MP for Westmount – Saint-Louis, Jennifer Maccarone,
for a few weeks, who also tabled a bill (599) aimed at abolishing conversion therapy.
But he was not called by the government, which preferred to present its own version.

Meanwhile, in Ottawa, the Trudeau government also introduced a bill to amend the Criminal Code to prohibit
forcing an adult or child into conversion therapy.

In September, when Ms. Maccarone tabled her bill, she denounced the fact that "several businesses and religious organizations, whose donors benefit from tax credits, are trying to convince Quebeckers that it is possible to treat
or cure homosexuality by means of "therapy", and this, for several years ".

In 2012, the World Health Organization (WHO) issued a statement claiming that this type of "therapy"
poses a serious threat to the health and rights of gay people.

It is estimated that across Canada at least 47,000 men have already undergone conversion therapy. There are no precise statistics on the number of cases listed in Quebec, the phenomenon being poorly documented.

Other provinces before Quebec have already banned these conversion attempts, namely Ontario, Nova Scotia and Prince Edward Island.
up