Bills with crucial issues for our children 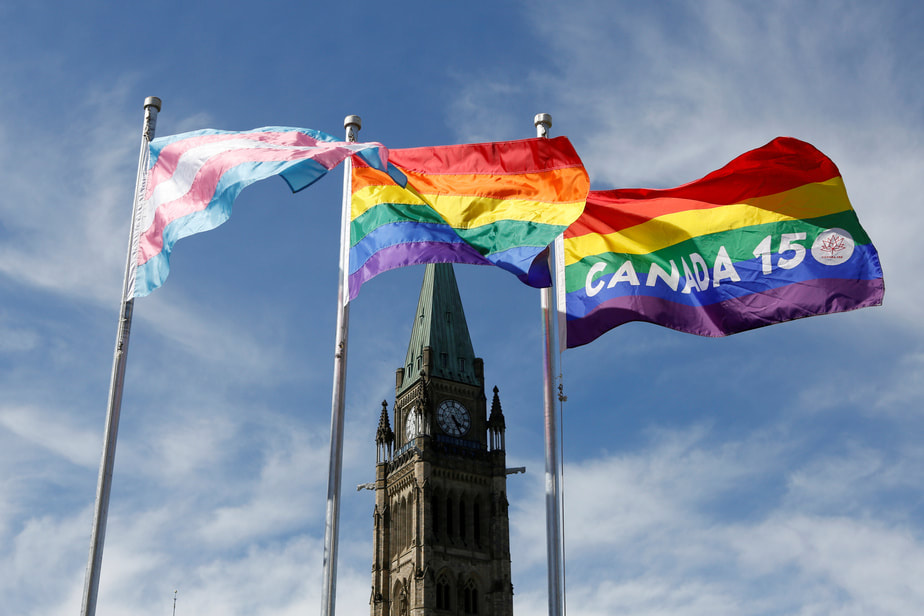 Pride flags fluttering in front of Parliament in Ottawa, 2017
Did you know that laws supporting the notion of “sex assigned at birth” are about to be passed in the parliaments of Quebec and Ottawa? Do you know that these laws risk encouraging the lifelong medication of children to change a healthy body to make it appear to be of the opposite sex?
These are bills PL-70 and C-6 aimed at penalizing conversion therapy. Of course, one can only approve of the prohibition of medieval practices to change a person's sexual orientation. Even though no licensed therapist practices them in Canada, it is good to be vigilant, especially towards conservative religious groups who continue to practice them.

The only thing is: in addition to sexual orientation, the definition of “conversion therapy” in the bills encompasses the notions of gender identity and gender expression. In fact, gender-related therapies refer to “gender dysphoria,” a medical term for the suffering of a person who feels they are not of their biological sex. So what would be the therapies linked to gender identity that would be prohibited by these laws? Against all logic, it is the least invasive therapeutic approach, that of exploratory psychotherapy,
based on the precautionary principle, which risks being hampered.

To be convinced of this, just read the report 1 that the Minister of Justice, David Lametti, presents as a fundamental document in support of C-6. We can read there a denunciation of doctors and other professionals who “refuse or delay” access to gender affirmation interventions.

If this interpretation is accepted, as soon as a child identifies with the opposite sex, he should be immediately directed, without further investigation, towards an affirmative approach, often accompanied by invasive medication (growth blockers, blood hormones. the other sex), often leading to surgical interventions (removal of the breasts, testicles, vagina, breast implants, etc.).

However, the scientific literature is very clear: a significant proportion (around 80% 3 ) of children who feel they were "born in the wrong body" come to terms with it in adolescence, and a large number turn out to be be gay or lesbian. But what happens when they are directed too quickly to medical transition?

Never mind. Bill 70 was tabled on October 22, and public consultations took place less than two weeks later, on November 4 and 5, during which only groups in favor of the bill were heard.
Why this haste to adopt PL-70, without a parliamentary committee, and without waiting for the one that will take place soon for C-6? Would the objective be to appear even more "progressive" than the Federal? In this regard, we would like to report the experience of a mother from our Parents' Collective (a group that submitted a brief for the two bills 3 ) who exposed her fears to the political attaché of a federal deputy responsible for C-6. The latter had the honesty to admit to him that, in any case, the bill would be adopted because “it is a political strategy to make the Conservatives seem intolerant”. We suspected it!

That said, we understand the emotion of our deputies at the staggering figures presented to them on the number of victims of "conversion therapy". However, these figures come from studies produced by pressure groups and highly questionable: non-probabilistic sample, not representative, but above all exaggerated and unjustified extrapolation of figures obtained for sexual orientation, but from which conclusions and recommendations are drawn. policies on gender identity.

In fact, there is no serious scientific study defining or having as its object “conversion of gender identity”.

Of course, any coercive method aimed at forcing a person to change their perception of who they are is not acceptable. But the prevention of such practices should not come at the expense of neutral exploratory approaches, aimed at self-acceptance,
to treat young people who identify as trans.

Unfortunately, the charge of transphobia is very effective in hampering competent psychologists and silencing the debate.

As part of the public consultation on the PL-70, at our suggestion to invite Dr.  Zucker, an internationally known Canadian specialist in childhood gender dysphoria, a member of Parliament replied that our suggestion would not be retained because Dr.  Zucker is "contested by the LGBTQ community"! Does the fear of offending win out over the quest for relevant and convincing information within the National Assembly?

We are sensitive to the demands of the LGBTQ community and we sincerely hope that it expresses itself on this subject. But we insist on the fact that all of society is affected by these bills, and that they must be developed on the basis of the best available knowledge. The fact that the population is kept out of legislative decisions in this area represents a serious democratic deficit.

Beyond political strategies and electoral aims, if nothing is done to protect the cautious approach advocating a vigilant waiting period for children who do not identify with their birth sex, politicians will be responsible for the foreseeable abuses
and damage to the lives of our young people.

As the Hippocratic Oath says: Above all, do no harm.
up