RETURN
According to Canada Statistics, the total recorded hate crimes against Catholics rose from 43 in 2020, to 155 in 2021. 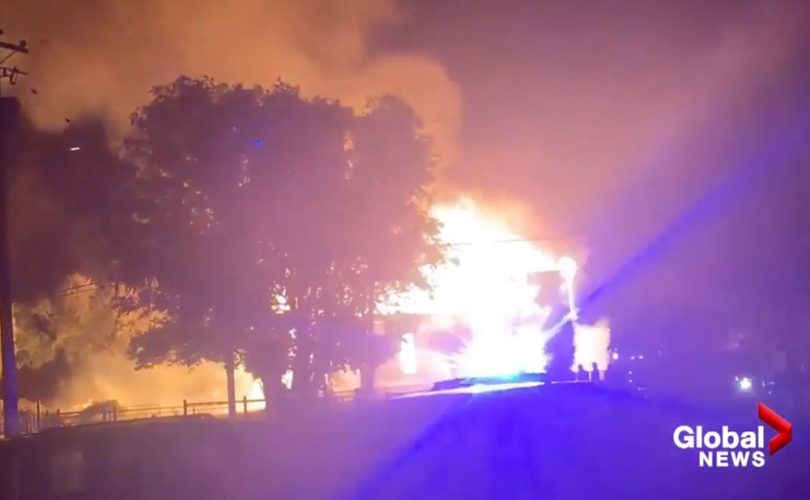 On August 2, Statistics Canada published a report revealing that hate crimes across the country against Catholics in 2021 experienced the largest rise out of any group, a news story which was largely ignored by mainstream media

“Undoubtedly, this increase can be attributed to attacks on Catholic churches in Canada in 2021 including the deliberate burning down of churches,” related the Catholic Civil Rights League of Canada (CCRLC).

“Mainstream media has reported the overall 27 percent increase, but the most staggering of all increases, the 260% rise in anti-Catholic hate crimes, has been largely ignored,” it continued.

“Our politicians must speak out against this alarming trend and law enforcement officials must vigorously investigate all incidents of hate crimes against Catholics and charge those responsible,” the CCRLC said.

“We will follow through to make sure that law enforcement responds with vigor to this alarming trend in anti-Catholic violence,” it continued.

The organization provides a database tracking attacks on Catholic churches across Canada, with attacks ranging from graffiti to arson.

The increasing targeting of Catholics is at least partly attributed to the misrepresentation of the Catholic Church’s role
in the residential schools for Indigenous children.

Pro-abortion Prime Minister Justin Trudeau slammed the Catholic Church in light of the Kamloops “mass graves,” blaming the Church for abuses at residential schools, despite evidence that abuse was actually caused by the Canadian government.

Furthermore, misleading reports of the alleged “mass graves” sparked a series of attacks against Catholic churches across Canada. More recent investigations from January 2022, found that despite the allegations of “physical genocide” on the part of the Church,
no graves have actually been found.

However, despite this, Canada Day 2021 saw a wave of anti-Catholic violence as 11 Christian churches in Calgary,
the majority of them Catholic, were defaced.

In June 2021, seven Catholic churches, five of them belonging specifically to First Nations communities, suffered arson,
and five were burned to the ground.