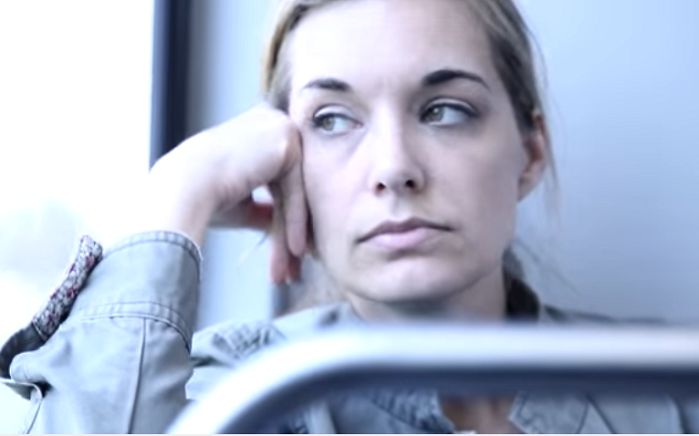 Legal abortion contributes to a fifty percent increased risk of premature death in women, according to a new systematic review that examined 989 studies of deaths associated with pregnancy outcomes.
Figure 1: Death rates are higher after an abortion beginning in the first 180 days and continuing for at least ten years
Within the first 180 days, the risk of death from any cause is over twice as high following abortion compared to that following delivery. The risk of early death remains elevated for at least ten years (Figure 1). 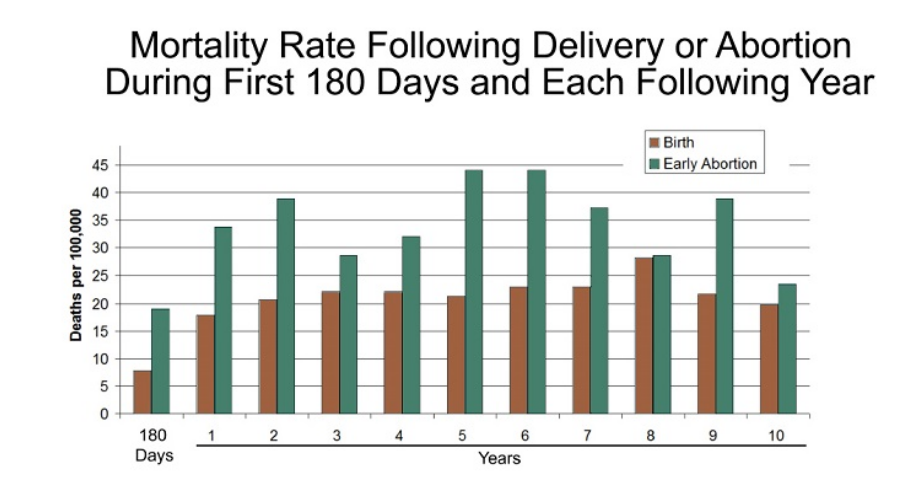 Both abortion and miscarriage are linked to elevated mortality rates, but the effect is more strongly associated with induced abortions.
The largest portion of premature deaths following pregnancy loss are due to suicides, accidents, homicides, and some natural causes, such as circulatory disease, which are known to be associated with stress.
The reviewers concluded that these findings are best explained by the psychological effects of pregnancy loss, which contribute to elevated levels of stress, substance abuse, risk taking, and self-destructive behaviors.
The studies reviewed also reveal a dose effect, with each exposure to abortion adding approximately a 50 percent increased risk of premature death compared to women who have never had abortions (Figure 2). 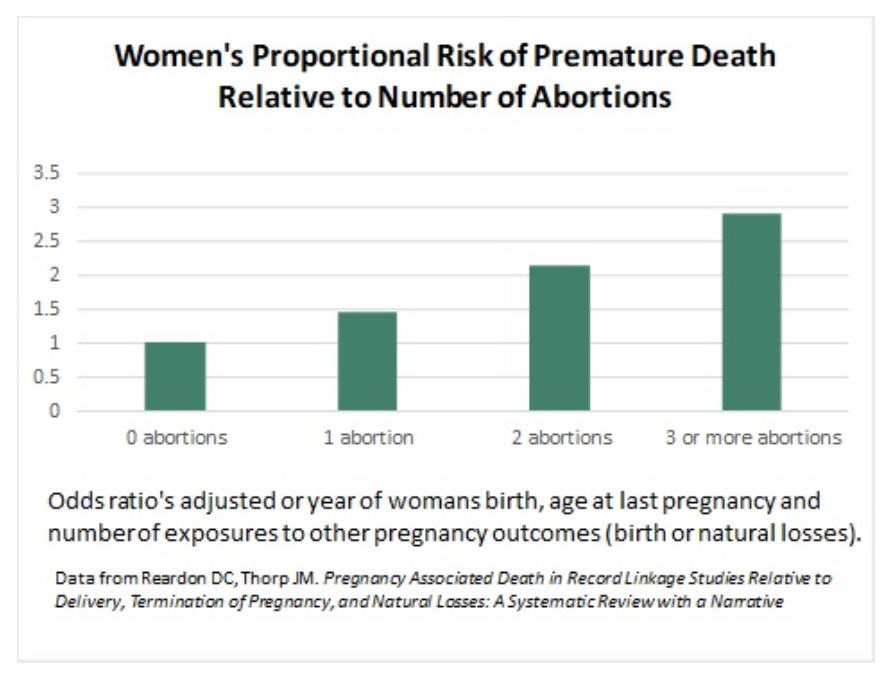 In contrast, delivering two or more pregnancies improves longevity. Delivery is also linked with a reduction in mortality risks associated with abortion or miscarriage alone.

Of the 68 higher quality record linkage studies identified by the research team, only 11 provided results to allow comparison between death rates associated with different pregnancy outcomes: birth, abortion, miscarriage or other natural losses.

Has there been a deliberate cover up?According to the review’s lead author, Dr. David Reardon, the elevated risk of death following pregnancy losses (abortion or miscarriage) was first identified in a study of the entire population of women in Finland in 1997. Reardon is the director of the Elliot Institute, a research group focused on reproductive health issues.

Reardon said that most of the record linkage studies published since 1997 could and should have investigated the differences in maternal death rates relative to pregnancy loss. But most researchers chose to only report on deaths associated with childbirth.

“It’s difficult to believe that these maternal mortality specialists are unaware of the unanimity of the 11 large population studies from Finland, Denmark, and the United States in regard to elevated risks of death following reproductive loss,” he said.

Reardon believes that the lack of more data on deaths following pregnancy loss is most likely due to a bias against publishing results that might undermine international efforts to promote access to abortion in less developed countries.

As an example of selective reporting, Reardon cited a comprehensive record linkage study from Italy, in which the authors noted that they had identified deaths associated with miscarriage and induced abortion. However, the authors subsequently refused to publish data allowing a comparison of maternal death rates relative to delivering or never pregnant women and those who had an abortion or miscarriage
Reardon also said that the fact that all record linkage studies reveal higher rates of mortality following abortion directly contradicts the assertion that abortion is ten to 15 times “safer” than childbirth.