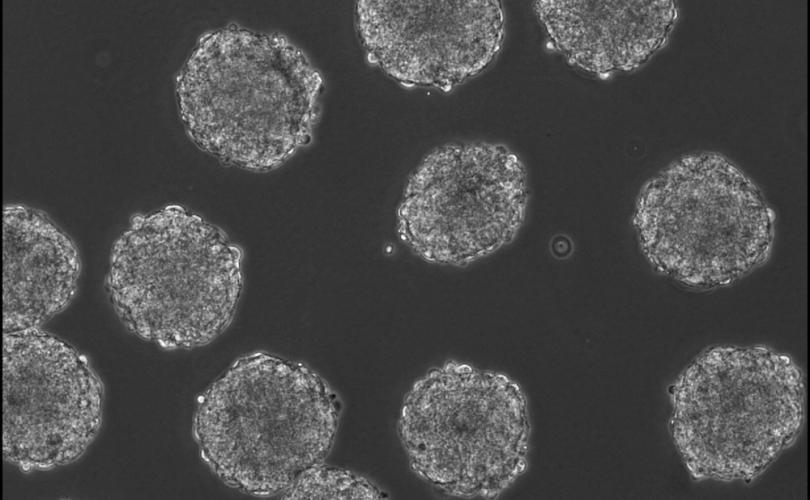 September 12, 2019 (LifeSiteNews) — A group of scientists revealed the opening of another Pandora’s box this week with a new paper detailing a method for quickly producing large quantities of organic structures similar to human embryos, for the purpose of studying human life in its earliest stages.

These devices, the researchers say, offer a “powerful experimental system to advance knowledge of human embryology and reproduction,” which “could assist in the rational design of differentiation protocols of hPSCs for disease modelling and cell therapy, and in high-throughput
drug and toxicity screens to prevent pregnancy failure and birth defects.”

Describing these embryoids as “synthetic embryos,” NPR reports that the research has sparked a conversation about
the ethics of creating organic entities so similar to newly conceived human beings.

Rockefeller University embryologist Ali Brivanlou said the development opens “windows to aspects of development that we have never seen before,” the “Holy Grail of human embryology." But Harvard and Case Western bioethicist Insoo Hyun called on researchers to be “very careful not to model all aspects of the developing human embryo, so that they can avoid the concern that this embryo model could
one day become a baby if you put it in the womb.”

Jianping Fu, the lead researcher on the paper, acknowledged he was “pushing the boundary” but insists he made sure these embryoids only “resemble a portion of the human embryo — the core of the early human embryo,” and that his team had “zero intention” of creating a “complete human embryo.”

That approach satisfied some of the researchers who spoke to NPR, but Georgetown bioethicist Daniel Sulmasy sounded concerned.

“That would be sort of a very early sort of Frankenstein model, right? Taking different parts and stitching them together in order to try to create an organism,” he said. “If somebody tried to do it and it were even at the earliest stages of embryonic development,
and they tried to then let it develop further, that would be a problem.”

Tackling the question of whether embryoids are, in fact, living human beings, Heather Zeiger of the Center for Bioethics & Human Dignity writes that they “seem to have many of the features that define a biological organism. They respond to environmental stimuli, exhibit self-organization, undergo growth and development, and consume energy. The cells within embryoids can be said to reproduce in the same sense that embryonic cells grow and divide. However, the embryoid itself lacks the necessary cells to grow into a human that, in turn, can reproduce. Furthermore, its self-organization is local in contrast to the global and directional organization of embryos.”

Ethical guidelines currently accepted by the scientific establishment dictate that scientists can experiment on an embryo only for up to fourteen days after its creation, a restriction that Fu touts embryoids as circumventing. In 2017, scientists from Harvard argued that the advent of embryoids necessitated replacing the 14-day rule with a more rigorous framework based on the precise nature of the entities being created.

“These and related experiments raise more foundational issues that cannot be fixed by adjusting the 14-day rule, because the framework underlying the rule cannot adequately describe the ways by which synthetic human entities with embryo-like features (SHEEFs) might develop morally concerning features through altered forms of development,” they wrote at the time. “We propose that limits on research with SHEEFs be based as directly as possible on the generation of such features, and recommend that the research and bioethics communities lead a wide-ranging inquiry aimed at mapping out solutions to the ethical problems raised by them.”
up
Thank you for your visit