I have a tremendous victory to share with you!

Second Coming’ comic
will not be released 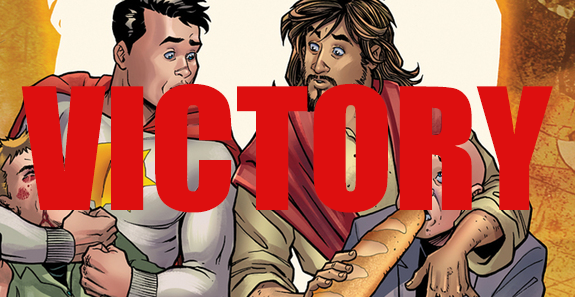 As a result of our "Second Coming" petition, DC Comics has responded by pulling the plug on this new anti-Christian series, scheduled for release next month!
Our petition went viral and spread quickly through social media and email. It was initially released on January 15th, but in less than a month, it received 228,000 signatures.
CitizenGO International CEO Ignacio Arsuaga comments: “I am happy to hear that the blasphemous ‘Second Coming’ comic will not be released by DC Comics. This is a victory for Christianity and a victory in favour of respecting religious beliefs. It would be a shame for a popular and well-loved brand like DC Comics to promote this blasphemous and anti-Christian content.”

The author of the comic, Mark Russell, described the concept behind his series as such: “God was so upset with Jesus’s performance the first time he came to Earth, since he was arrested so soon and crucified shortly after, that he has kept him locked-up since then.” The promotional images and summaries provided by Russell and DC Comics made it clear that this comic would ridicule and blaspheme Jesus.

In the petition, signers asked: “Would DC Comics publish similar content about other religious leaders, such as Mohammed or Buddha?” Jesus’ story, and the Christian faith, should not be ridiculed for the sake of selling comic books.
You can read more about the cancellation of this comic in these breaking news reports:
https://comicbook.com/dc/2019/02/13/dc-comics-cancels-second-coming/
https://www.newsarama.com/43906-dc-s-superhero-jesus-comedy-second-coming-canceled.html
For those who signed and shared our petition, THANK YOU for being a part of the VICTORY! We are changing the world.
Yours for Christ,
David Cooke and the Entire CitizenGO Team