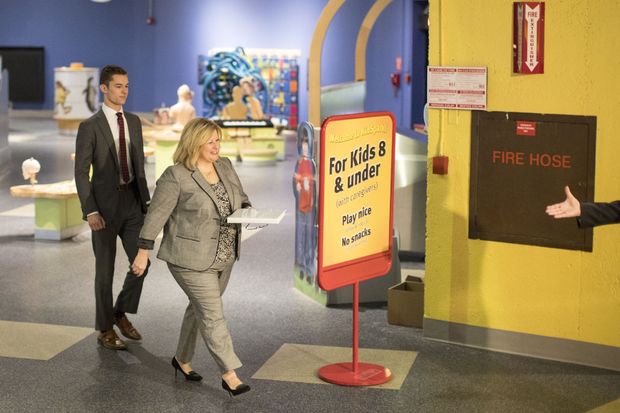 Ontario Education Minister Lisa Thompson makes her way to a podium alongside Parliamentary Assistant Sam Oosterhoff, before making a statement at the Ontario Science Centre, in Toronto, on March 15, 2019.

The Ontario government plans to increase class sizes for high school and some elementary grades, part of sweeping changes to the province’s education system that will also include modifications to the sex-ed curriculum and a “back-to-basics” approach to math.

Education Minister Lisa Thompson announced on Friday that over the next four years the average class size would increase by one student in Grades 4 to 8, and from 22 to 28 students in high school. Her remarks immediately set the stage for a battle with the public high-school teachers’ union, whose head said the change would provoke “massive resistance.”

The government has held a series of consultations, both with education stakeholders and the wider public, on everything from class sizes in primary grades and staffing in full-day kindergarten to a cellphone ban in classrooms and rewriting the contentious sex-ed curriculum.

Ms. Thompson said the government will not change class sizes in kindergarten, nor will it remove the cap of 23 students in Grades 1 to 3.

“Our planned changes to class sizes will happen gradually over four years. And not one teacher, not one, will lose their jobs because of our class size strategy,” Ms. Thompson said at a press conference at the Ontario Science Centre.
(It is expected that positions will not be filled as teachers retire or voluntarily leave the profession.)

Harvey Bischof, president of the Ontario Secondary School Teachers’ Federation, said increasing the class size average, which is protected in contracts, would mean schools would have a difficult time offering as many specialized classes, like technology studies, that require smaller groupings of students. Some classes, including those in core subjects like math, could grow to as many as 40 students, teachers’ unions say.

Mr. Bischof said the gap between what the government has proposed and what is in the collective agreements is “unbridgeable." Teachers’ unions and the government, along with school boards, are expected to negotiate new contracts starting this fall.

“What they’re trying to do is undermine the value of our collective agreements in terms of protecting class size caps ... I’m telling you we’re absolutely not going to be in a position where we’re going to give away the class size caps that we have achieved over years of negotiations,” he added.

He added: “They will provoke nothing but massive resistance.”

Liz Stuart, president of the Ontario English Catholic Teachers’ Association, said her union will “use all means” to fight the changes.
“There is no doubt that increasing class sizes will make Ontario’s intermediate and high school classrooms more crowded
more chaotic and less productive,” Ms. Stuart said.

The research on class size is mixed when it comes to student achievement, but it is generally focused on elementary school children. Some research shows it is beneficial to reduce class sizes, especially in the early years, but the effect on academic achievement is small. Other studies show that the key to quality education is spending money on developing strong teachers and a high-quality curriculum.

Asked about the resistance from teachers’ unions to class size increases, Ms. Thompson said in an interview that Ontario has one of the lowest student-teacher ratios among provinces that have restrictions on class sizes, and the increase will align it with other jurisdictions.

The government also announced that it would ban cellphones in classroom unless the devices are used for educational purposes. Further, it would phase in a new math curriculum over the next four years that moves away from the current approach known as discovery math. The existing program emphasizes group problem-solving and expressing ideas in a variety of ways, to one that focuses on traditional formulas and memorization techniques.

Ms. Thompson also said on Friday that there would be a new “age-appropriate” sex-ed curriculum.
Students will learn the proper names of body parts in Grade 1, as they did under the previous 2015 curriculum, which was developed by the former Liberal government and was seen as age-inappropriate by some parents and groups, especially social conservatives
who zeroed in on its lessons on gender identity and same-sex marriage.

In the new curriculum, students will not learn about gender identity and gender expression until Grade 8. In the 2015 curriculum
students were taught those topics in Grade 6.

Ms. Thompson said parents would be able to exempt their children from sexual-health education
but that the government is still working through the process on how that would work.

NDP education critic Marit Stiles said Monday’s announcement on class size increases is the first step in more cuts that will affect families.
“I think this is just the beginning,” she said.