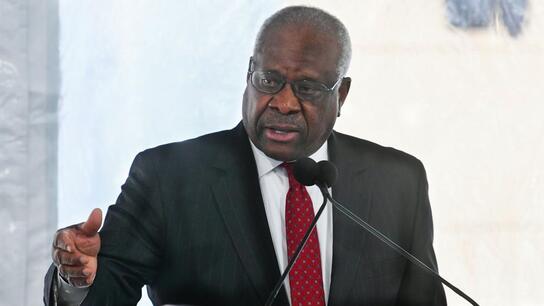 Supreme Court Justice Clarence Thomas is railing against the unchecked power of Big Tech, including social media giants like Twitter and booksellers like Amazon, to control speech in America.

Thomas's comments came on the heels of a somewhat related Supreme Court case. It was about former President Donald Trump's efforts to block critics from his personal Twitter account. The Court declared that case moot since Twitter has banned Trump, but Thomas said the case raises a lot of very big issues that will need to be addressed soon.

"Today's digital platforms provide avenues for historically unprecedented amounts of speech…also unprecedented, however, is the concentrated control of so much speech in the hands of a few private parties. We will soon have no choice but to address how our legal doctrines apply to highly concentrated, privately owned information infrastructures such as digital platforms," the justice wrote.
Thomas also noted the need to legally address the control of online content available to the American public.

"If part of the problem is private, concentrated control over online content and platforms available to the public, then part of the solution may be found in doctrines that limit the right of a private company to exclude," he wrote.

'Ensure that Speech Is Not Smothered'

Thomas also writes of the unchecked power that these platforms have to squelch free speech.

"The question facing the courts below involved only whether a government actor violated the First Amendment by blocking another Twitter user. That issue turns, at least to some degree, on ownership and the right to exclude. The Second Circuit feared that then-President Trump cut off speech by using the features that Twitter made available to him. But if the aim is to ensure that speech is not smothered, then the more glaring concern must perforce be the dominant digital platforms themselves," Thomas wrote.

"As Twitter made clear, the right to cut off speech lies most powerfully in the hands of private digital platforms. The extent to which that power matters for purposes of the First Amendment and the extent to which that power could lawfully be modified raise interesting and important questions. This petition, unfortunately, affords us no opportunity to confront them," he wrote.

Mentioning Google, Facebook, Twitter, and Amazon by name, Thomas wrote: "Much like with a communications utility, this concentration gives some digital platforms enormous control over speech. When a user does not already know exactly where to find something on the Internet—and users rarely do— Google is the gatekeeper between that user and the speech of others 90% of the time. It can suppress content by deindexing or downlisting a search result or by steering users away from certain content by manually altering autocomplete results."

"Facebook and Twitter can greatly narrow a person's information flow through similar means. And, as the distributor of the clear majority of e-books and about half of all physical books, Amazon can impose cataclysmic consequences
on authors by, among other things, blocking a listing," he continued.

It's Not a Free Market if Tech Giants Dominate

Some observers say the government shouldn't get involved in regulating the free market of technology.
But Thomas argues it's not really a free market at this point.

He contends that the public does not have a sufficiently influential alternative to many of these social media companies' enormous platforms.

"It changes nothing that these platforms are not the sole means for distributing speech or information. A person always could choose to avoid the toll bridge or train and instead swim the Charles River or hike the Oregon Trail. But in assessing whether a company exercises substantial market power, what matters is whether the alternatives are comparable. For many of today's digital platforms, nothing is."
Victim of Big Tech Censorship Applauds Thomas 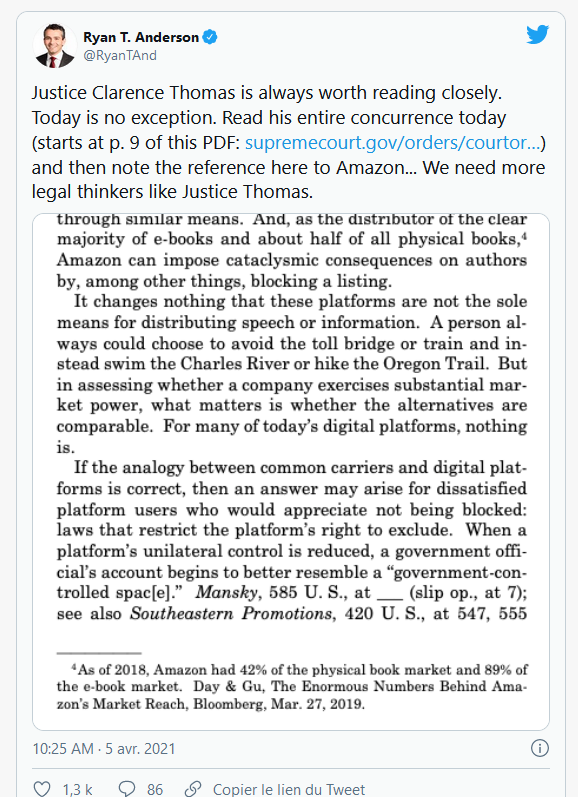