'God Using Me in a Different Way': Damar Hamlin Tweets His Faith as Entire NFL Teams Bow in Prayer 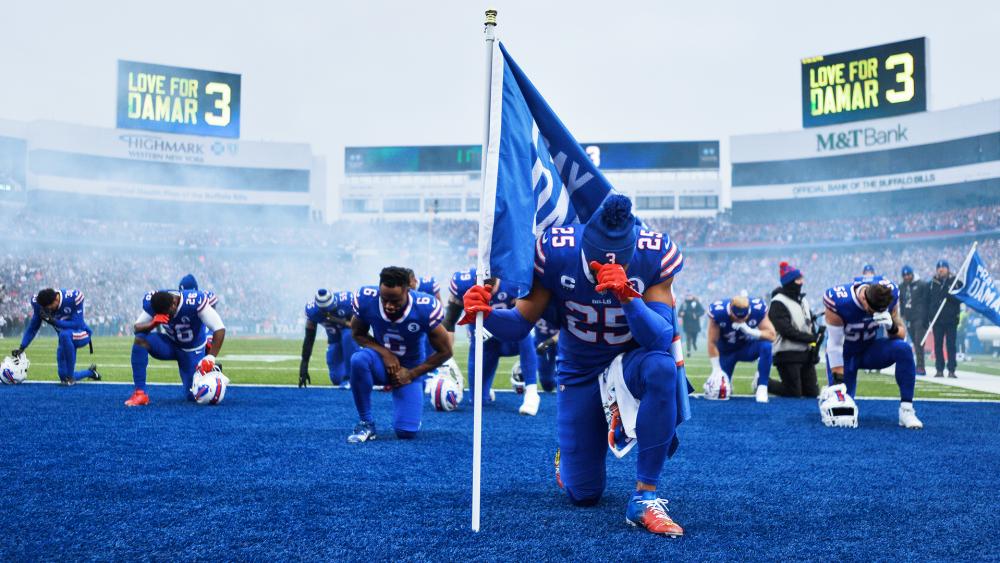 Buffalo Bills' safety Damar Hamlin was transferred from the University of Cincinnati Medical Center today and was flown home to Buffalo where a doctor said he was "doing well.” Hamlin will continue his recovery at a Buffalo hospital.

It's the latest answer to prayer for millions of people as the 24-year-old shows steady signs of improvement. Still, Hamlin is asking for more prayers as he still faces a long road of healing ahead.

The good news comes after big plays and big prayers took center stage this weekend as NFL players showed strong support for Hamlin less than a week after he collapsed on the field from cardiac arrest.

A joint statement from the Bills and the University of Cincinnati Medical Center had indicated Hamlin was still in critical condition over the weekend.  "Damar is making continued progress in his recovery yet remains in critical condition," according to the statement which was issued on Saturday. "He continues to breathe on his own and his neurological function is excellent."

Although Hamlin was not able to return to the stadium for his team's game on Sunday, he tweeted that God is using him in a "different way." 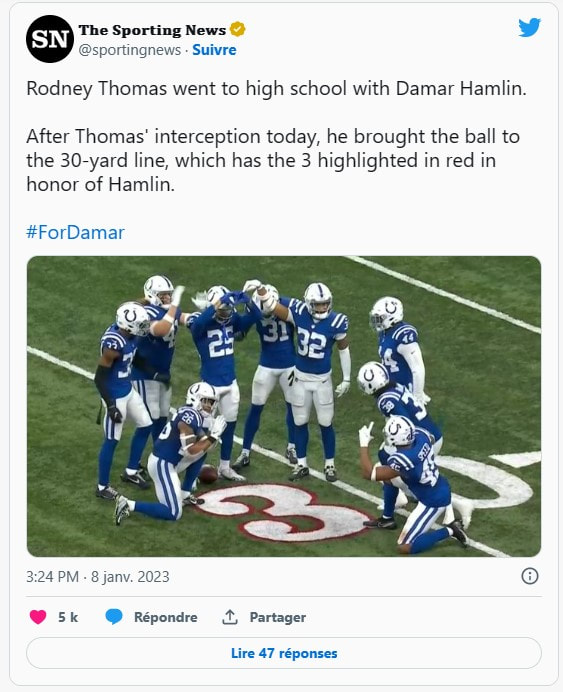 Meanwhile, the Bills scored a touchdown on the opening kickoff against the New England Patriots paying tribute to Hamlin, and Indianapolis Colts safety Rodney Thomas celebrated Hamlin's ongoing recovery by running to the third-yard line after snagging an interception against Houston Texans quarterback Davis Mills.

Other players showed their support through prayer.

The Jacksonville Jaguars and Tennessee Titans bowed down in the middle of the football field to pray for Hamlin during Saturday's game. And Derwin James and Russell Wilson both wore number 3 and prayed on the field before the Broncos-Chargers game on Sunday afternoon.
Hamlin recently thanked the millions who have prayed for his survival and recovery.

"When you put real love out into the world it comes back to you 3x's as much," he wrote on Instagram. "The love has been overwhelming, but I'm thankful for every single person that prayed for me and reached out. We brung the world back together behind this. If you know me you know this only gone make me stronger. On a long road keep praying for me!"

Hamlin continues to recover after he collapsed on the field a week ago in a Monday night game on national television in Cincinnati. Hamlin had just tackled Bengals' wide receiver Tee Higgins in the first quarter.

It is not clear whether there is a definite connection between the hit and Hamlin's collapse, but physicians at the University of Cincinnati are considering the possibility that Hamlin suffered an event called "commotio cordis," in which a strike to the chest within a 20-millisecond window in the heartbeat cycle can quickly disrupt vital signs," NBC reports.

The event led to a widespread amount of prayer and support. Even football analyst Dan Orlovsky paused
in mid-show to pray aloud on ESPN Live.

Jeffrey Scholes, associate professor of Religious Studies at the University of Colorado at Colorado Springs, said he hasn't seen such a public outpouring of prayer in any sport.

"Dan Orlovsky breaking out in prayer was just kind of stunning," Scholes shared. "I've never seen anything like that. It looked more like the 700 Club than it did ESPN for a bit there."

Hamlin's family is also offering their thanks for all the prayers offered up on his behalf.

Damar announced he is raising money for the first responders and the University of Cincinnati Trauma Center,
who are helping him during his recovery.

Hamlin's Chasing M's Foundation raised a stunning $8.5 million in the last week from fans just looking for an outlet to show their support for him. Supporters, team owners, and players like Russell Wilson and Tom Brady, continue to support the foundation.