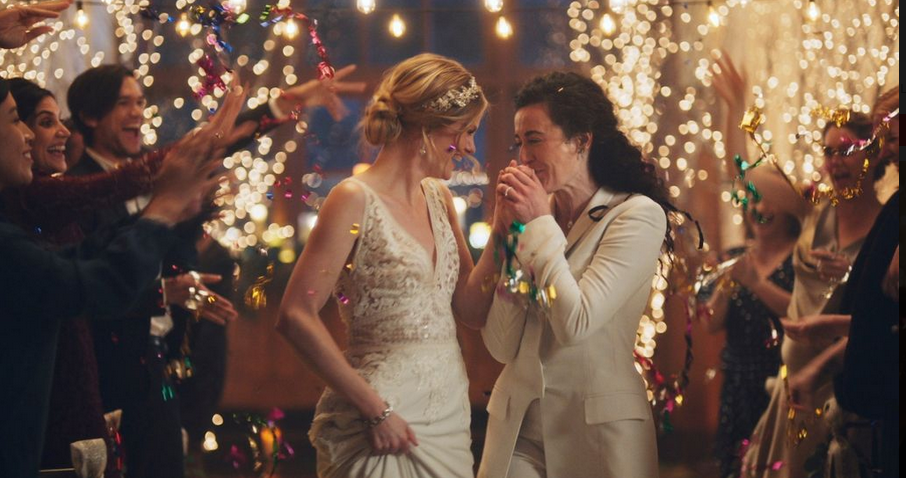 NEW YORK - Hallmark Channel is backing down and bringing back advertisements showing gay couples who had been withdrawn
from the controversy after a complaint from a conservative group.
The decision of its parent company, Crown Media Family Network, to stop running several announcements from a wedding planning website showing two women kissing on the altar had raised uproar on social networks. Celebrities like host Ellen DeGeneres and comedian William Shatner condemned the decision and the hashtag #BoycottHallmark was popular on Twitter on Sunday.

"The Crown Media team was tortured with this decision because of all the pain it unintentionally caused,
" a statement released on Sunday evening said. In short, they believe it was the wrong decision. ”

Wedding planning site Zola said it was relieved of this flip-flop, as did GLAAD,
an LGBTQ community rights group that had quickly denounced the channel.

GLAAD President and CEO Sarah Kate Ellis sees this recent development as "a major setback for marginal organizations
like One Million Moms, whose sole purpose is to hurt families like mine."

One Million Moms is this conservative group member of the American Family Association who complained to Bill Abott,
the CEO of Crown Media Family Network.

"This call gave us the opportunity to confirm that the Hallmark Channel will continue to be a safe, family-friendly channel," the group said in response to the original decision to remove the ads. According to One Million Moms, Abbott said that "the advertisement was broadcast in error."

One Million Moms did not immediately react to the turnaround on Sunday.
up
Thank you for your visit