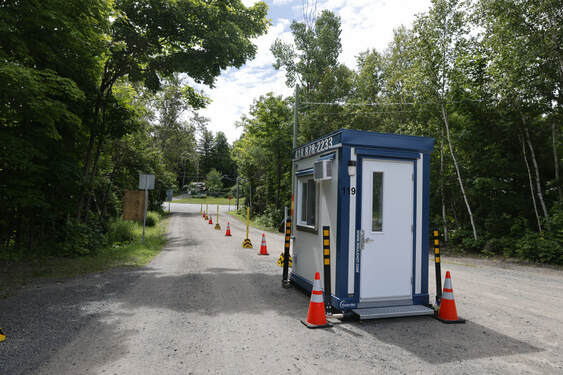 The LGBTQ + community is worried that it will no longer be able to visit Sainte-Marguerite Falls, in the Laurentians, a place of historical importance for this group. Bathers denounce having been blocked access to the body of water when passing through a gatehouse installed in the parking lot closest to the scene. The MRC des Pays-d'en-Haut argues that the addition of guards responds to safety problems on the P'tit Train du Nord trail, near the famous falls. 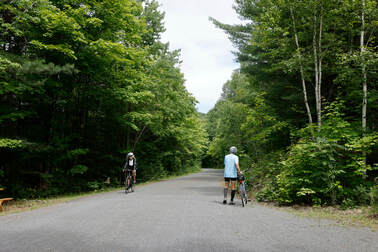 With the lush forest and the sound of flowing water, the falls located in Sainte-Adèle are truly the “haven of peace” of which Christian Tanguay, general manager of the LGBTQ + community center in Montreal, speaks. But since last year, the presence of security guards has worried the community, which sees the place as a safe space to meet, far from prejudices. Located 1.5 km from the parking lot, the falls are a delight for swimmers and naturists.

During its visit on Saturday July 10, La Presse observed a security booth at the entrance to the parking lot, managed by the MRC des Pays-d'en-Haut. The P'tit Train du Nord trail was open to cyclists, runners and walkers.

Access to the falls was prohibited for everyone, since the land bordering them belonged to private owners and to the City of Sainte-Adèle. Bathers interviewed on the spot circumvented the problem by affirming at the gatehouse that they came instead to walk.

In 2020, big gatherings took place at these same falls. The mayoress of Sainte-Adèle, Nadine Brière, explains that “the MRC had to intervene last year following the fact that users of the Petit Train du Nord no longer had access to the parking lot for cycling or running. ".

"Discrimination on the basis of sexual orientation"
Members of the LGBTQ + community feel targeted by the addition of a gatehouse. Félix * (fictitious first name), says he was turned back at the entrance to the P'tit Train du Nord trail last summer. “It was easy to know what I was going to do, it wasn't cycling. I wanted to go to the falls, ”he recalls. The latter speaks of the body of water as "a small paradise on earth" where people are respectful and open-minded. This year, the young man decided to change his swimming location, to prevent the same scenario from happening.

On June 9, Automne, who wishes to remain anonymous, filed an appeal for judicial review requesting the removal of the gatehouse. The document states that in addition to the refusals due to the falls, “other people were also turned away from the Parking Lot by the [MRC] security officer due to their age and the fact that they were or appeared to be be LGBTQ + people, without them indicating their intention to go to Sainte-Marguerite Falls ”.
"It really is the control by the security guards at the entrance of the park we are concerned, said M e  Mark Phillips, representing the applicant. As alleged in our proceedings, it was done for the purpose of discrimination based on sexual orientation. "

A fundraiser, posted on June 27 by the plaintiff of the legal action, aims to finance the legal action. She has brought in $ 560 so far. Automne told La Presse that it would currently be possible to take the trail, if the falls are not mentioned. The latter argues that these changes would be due to the filing of the appeal for judicial review. "That being said, it is highly likely that once community and legal mobilization has ceased, security will once again begin to deny anyone it suspects to be on the verge of queerizing the trails," he fears. .

Controversy around the gatehouse
“We do not want to restrict access, defends André Genest, prefect of the MRC des Pays-d'en-Haut. It is not with us. The latter explains that security guards inform walkers and cyclists of the steep slope in the area. "Our concern is at the level of safety," insists the latter, pointing to the increased traffic since last year.

Christian Tanguay is skeptical. It evokes the tense history of the place. In 2017, police interventions led to the distribution of reports for nudity and gross indecency. The events were the subject of a Radio-Canada report. Mr. Tanguay raises
the fear of being stopped while going to the falls. 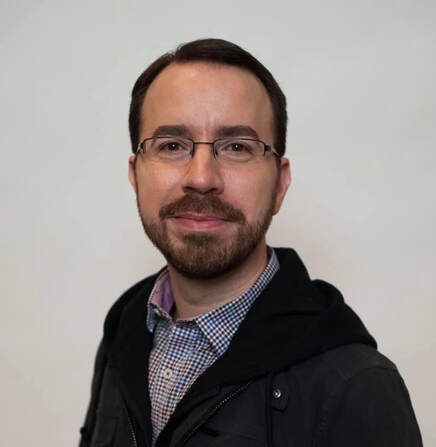 The latter wishes to open a dialogue between the stakeholders. "There are ways to ensure that people do not feel that we are trying to make their life impossible," he says. According to him, we ask people of the LGBTQ + community to walk in single file, but not families.

Historic "haven of peace"
Last year, Christian Tanguay says he went there with an elder from the community, who has been visiting the place for 40 years. “It's a place where you can go without being looked at or having comments,” he says. According to him, this body of water allows the community to have a place of socialization, while enjoying a natural site outside the major centers.

It is a symptom of homophobia and transphobia. If we were in a society accepting and tolerant of the LGBTQ + community, I don't think these sites would exist.

Security measures such as gatehouses prevent real solutions from being found and listening to the needs of communities, he said. “People are just going to move to another place,” says Daniel Gosselin.

The latter denounces the unequal treatment suffered by the LGBTQ + community. “There are also [dating] sites in the woods for straight people, but you never hear about them, and that doesn't seem to bother the population. As soon as it concerns queer people, it looks like it bothers more, ”he concludes.

SIMILAR SCENARIO IN SAGUENAYAccording to Daniel Gosselin, of Diversité 02, the Sainte-Marguerite Falls controversy recalls the problems experienced in Saint-Jean-Vianney, a safe space for the LGBTQ + community in the city of Saguenay. Since May 4, a monument and rocks have been installed there to commemorate a landslide that took place in 1971. “For me, it's really clear in my head, we put big rocks so that the people no longer go to the site, ”says Mr. Gosselin. Stéphane Bégin, press secretary of the office of the mayoress of Saguenay, Josée Néron, retorts that the presence of rocks wants to prevent the circulation of vehicles, in order to create a place of meditation.
“None of this has been done to block access to LGBTQ + groups,” he said.
PRESS
FLORENCE MORIN-MARTEL
https://www.lapresse.ca/actualites/2021-07-15/chutes-sainte-marguerite/l-acces-au-havre-de-paix-lgbtq-compromis.php?utm_source=newsletter-la-matinale&utm_medium=email&utm_campaign=202107150652-redac-matinale-aws
UP