RETURN
The Association of United States Catholic Priests is supporting the Every Child Deserves a Family Act which would effectively shut down the adoption services of Catholic Charities by mandating homosexual adoptions, as well as potentially adopting children to couples of any belief system, including active Satanists. 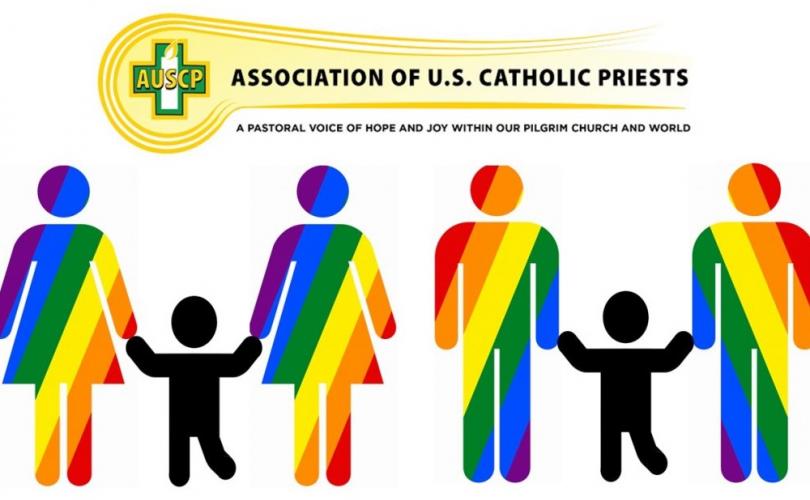 (Lepanto Institute) – Longtime readers of the Lepanto Institute are familiar with the growing threat posed to the Faith and the Faithful by an organization of heretical priests called the Association of United States Catholic Priests (AUSCP).  In the past, we’ve reported on this group for its support of women’s ordination to the priesthood, it’s alliance with sexually deviant organizations and agendas, its work with an international network of heretical organizations, and its call for “priestless parishes.”  The AUSCP’s scandalous work even elicited a warning from its own bishop, Bp. Daniel Thomas, who said that any association with the AUSCP “may be a source of grave concern due to the confusion and scandal they have caused.”

Bishop Thomas may have cause to issue another warning regarding the AUSCP. The AUSCP’s obsession with all things dissident and perverse continues as we recently discovered that the organization is actively pressing for the passage of the “Every Child Deserves a Family Act.”(ECDF) The ECDF is the latest push from homosexual activist pressure groups to force “non-discrimination” for any organizations that accept federal funding for their adoption services. Catholic Charities is one such organization and LGBT pressure groups have been attacking Catholic Charities for some time as it follows Catholic teaching defining what constitutes a family when pcing orphans with prospective families.

The ECDF would effectively shut down the adoption services of Catholic Charities by mandating homosexual adoptions, as well as potentially adopting children to couples of any belief system, including active Satanists.

The Lepanto Institute questions the wisdom of Catholic agencies being tied to federal funding for this very reason, as it often comes with strings and temptations attached. However, we know full well that the pressure groups will not be satisfied even with federal funding removed, and that these pieces of legislation are a frontal assault on our freedom as Catholics.

It is unconscionable that any Catholic would push for such legislation, but unfortunately that is the case. The AUSCP’s March 28, 2021 newsletter praised dissident Sister Simone Campbell for her article calling for action on the ECDF and called on AUSCP members to sign a letter in support of the ECDF. 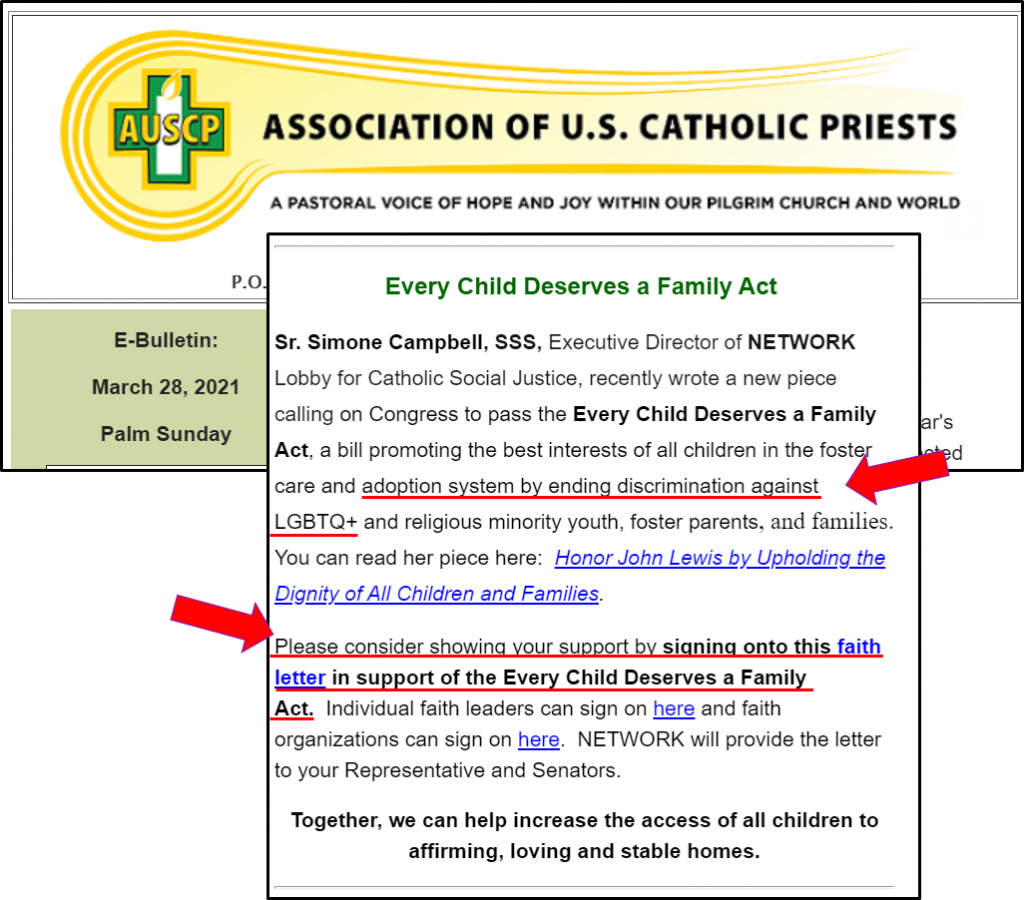 The letter supporting the ECDF says this:

“As people of faith, we believe that all children and families touched by our child welfare system must be treated with dignity and respect, free from discrimination.  Passage of the Every Child Deserves a Family Act will move us towards this critical goal by barring discrimination in federally funded foster care and adoption services based on religion, sex, sexual orientation, gender identity and marital status…”

It continues, “To argue that religious freedom justifies the use of taxpayer dollars to discriminate against children and prospective parents is a distortion of such freedom and a misunderstanding of civil rights law.”

In 2019, The AUSCP joined a coalition in support of the that year’s version of the ECDF. The coalition website is very clear that this legislation is directly targeting faith-based adoption agencies like Catholic Charities, and directly calls for these groups to either bow to the LGBT lobby or be stripped of funding.

The AUSCP is clearly listed as an endorser on the coalition’s website: 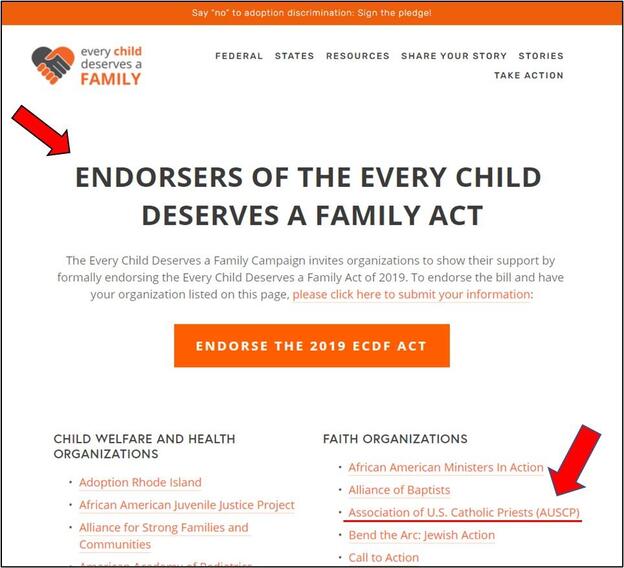 The US Bishops and USCCB fought against similar efforts in 2017, placing the AUSCP squarely at odds with the US Catholic Church.  Archbishop William Lori, Bishop James Conley, and Bishop Frank Dewane, speaking in their official roles as chairman of key USCCB subcommittees, endorsed the “Child Welfare Provider Inclusion Act” in a joint letter to Rep. Mike Kelly of Pennsylvania.  Accompanying the letter was a USCCB fact sheet which said:

“The Inclusion Act is needed because child welfare service providers are being subjected to discrimination because of their sincerely held religious beliefs and moral convictions.”

Given the USCCB’s official calls for protection of religiously-based adoption agencies, and the AUSCP’s endorsement of the very opposite, it’s very strange that the AUSCP continues to receive such strong support from US Bishops.  Normally, the bishops’ sense of collegiality would cause them to circle the wagons in the face of a perceived threat to federal funding of their favorite projects, and yet, Archbishop John Wester, Bishop John Stowe, Cardinal Wilton Gregory, Cardinal Blaise Cupich, Bishop Robert McElroy, Bishop John Hartmeyer, and Archbishop Robert Carlson have all actively participated in AUSCP events.  In fact, Abp. Wester is the USCCB’s liaison to the AUSCP, and Bp. Stowe is an actual member.   Last year, the papal nuncio, Archbishop Christof Pierre was scheduled to participate in the AUSCP’s annual assembly,
but canceled because of COVID.

This year, Bishop Richard Pates and Bishop William Wack will be joining Abp. Wester in the upcoming AUSCP annual assembly.

The Spring edition of The Cincture, which is the official archdiocesan newsletter for Milwaukee priests, ran a full-page promotion of the upcoming 2021 AUSCP Annual Assembly in its Spring 2021 issue. 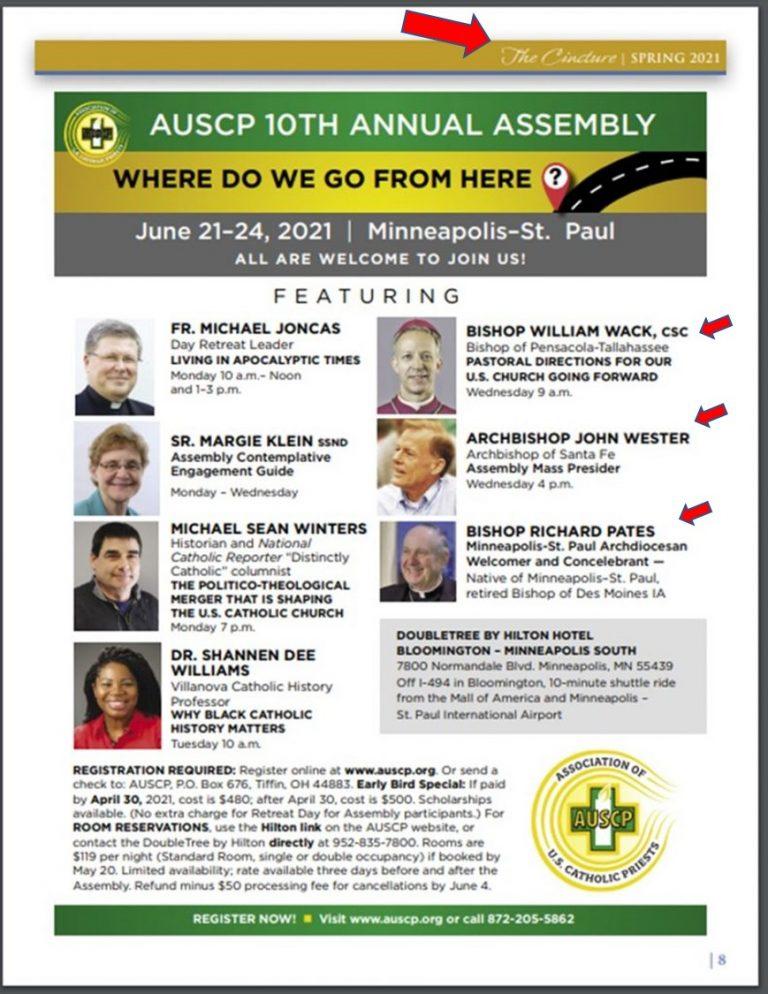 We reached out to the Archdiocese of Milwaukee last week for clarification on the full-page ad with the following email:

My name is Michael Hichborn, I’m the head of the Lepanto Institute.  I am writing to you because I was recently made aware that on page 8 of your latest issue of The Cincture, you published a full page advertisement for the Association of United States Catholic Priests (AUSCP).  Here is a link to the issue: https://archmil.org/ArchMil/offices/Clergy/CinctureNewsletterSpring2021.pdf

We are currently working on a new report about AUSCP, but I was hoping to obtain some clarification
from the Archdiocese of Milwaukee before we publish.

1)      Does the Archdiocese of Milwaukee have a position on the 2019 Every Child Deserves a Family Act (ECDaF)? This act would prevent agencies that receive federal funds (including Catholic Charites) from turning away prospective adoptive parents due to sexual orientation,
gender identity or marital status.

2)      Was the Archdiocese of Milwaukee aware that the AUSCP supports the ordination of women to the Catholic priesthood?  (For reference, please see here: https://www.lepantoin.org/us-bishops-support-priest-assembly-calling-for-womens-ordination/)
3)      Does the Archdiocese have a position on New Ways Ministry and Dignity USA?

4)      Given that the AUSCP supports both the ECDaF act, the ordination of women, and homosexual activist organizations (New Ways Ministry and Dignity USA) why were they allowed a full page ad in the Archdiocesan newsletter?

5)      If the Archdiocese was unaware of the above, but is now, will Archbishop Listecki be permitting or forbidding his priests from being involved with the AUSCP?  It should be noted that last year, Bp. Daniel Thomas issued a warning that any association with the AUSCP “may be a source of grave concern due to the confusion and scandal they have caused.” https://www.lepantoin.org/bishop-warns-against-heretical-priest-association-excommunicates-womanpriest-representative/

6)      If the Archdiocese was unaware of the aforementioned positions of the AUSCP, will the Archdiocese be taking any remedial action to correct the full page ad found in The Cincture?

We will be publishing our new report on the AUSCP next week, so if the Archdiocese of Milwaukee would like for us to indicate that it was unaware of the AUSCP’s position on these matters, and any remedial action the Archdiocese intends to take regarding the full-page ad, we will need answers to these questions by Sunday evening.

Thank you in advance for your time and attention.

The communications department responded two days later, indicating that they merely format the newsletter and forwarded our questions to Fr. Jerry Herda, the Archdiocesan Vicar for Clergy. We replied to that email, including Fr. Herda, reiterating the need for a response by Sunday.  No response was given.  We followed up with calls on Monday and Tuesday and left a message extending our deadline,
and still have yet to hear back.

The AUSCP and its allies pose a clear and present danger to the Faith and to the faithful, not because they possess any real power or authority, but because they are being given legitimacy by prominent bishops and cardinals, who are aiding them in their work. The longer this cabal of heterodoxy is permitted to operate and function without fear of consequences or reprisals, the greater its influence will become.
Please contact your bishop (you can find their contact information here) and request that he formally condemn the AUSCP, forbidding his priests from joining, supporting, or associating with the Association in any way. Also, contact the Archdiocese of Milwaukee, requesting that they formally retract the promotion in the Cincture.

Reprinted with permission from the Lepanto Institute.
LIFE SITE
BY Michael Hichborn
https://translate.google.com/translate?hl=en&sl=en&tl=fr&u=https%3A%2F%2Fwww.lifesitenews.com%2Fnews%2Fheretical-association-of-catholic-priests-supports-pro-lgbt-adoption-legislation&anno=2&sandbox=1
UP