Was he a human person? 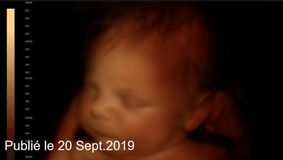 A historic trial was scheduled to begin in Montreal on September 6, 2019.
An individual who stabbed his nine-month-old pregnant wife was accused of murdering her baby.

Why talk about a historical trial? When taken to hospital, his wife was saved, but despite a caesarean section,
the baby "died" fifteen seconds after leaving her mother's womb. The father was therefore charged with murder.

The advocates who defend the gentleman say, on the contrary, that the child died in the maternal womb a few minutes before getting out completely. So, it's very clear, we can not accuse him of murder under the law in force in Canada.

Even before the start of this bloody trial, the judge said loud and clear that we are facing a very difficult trial. The legal battle on the horizon is: when did this baby die? We will be entitled to a pack of experts of all kinds who will testify for the defense and the crown.
Currently, feminist movements are watching this trial.

We must remember here the monstrous Canadian law that says "that the child must be completely out of the womb to be considered as a human person". At three o'clock one minute and five seconds, the fetus is in the maternal womb. He is nothing. He is not especially a human person. There is only a mass of cells that can be thrown away. Twenty seconds later, he comes out of his mother's womb completely. Then, he instantly becomes a human person and he has rights; if someone kills him, he will be charged with murder [ Journal de Montréal ].
We are in Canada, paradise (or rather hell!) Abortion at all times, on request and without any constraints or beacons. It's open bar!
The very feminist government of Justin Trudeau is very proud of this national butchery!

We are also campaigning for the October 2019 federal election. This abortion scandal in Canada should be the subject of much national debate. Unfortunately, we live in a climate of generalized fear. All political parties must make pro-abortion profession by screaming that the debate is over. It is surreal to see all these politicians close their eyes to what is happening in Canada. We seem satisfied to witness the massacre of these innocent saints. There is a hysterical fear of feminist movements. Even our clergy are resigned and they are silent!

As I write this column, I have just heard a special newsletter on the news. "The suspect, accused of the murder of his baby, during the assault on his wife, decided to plead guilty". So, there will be no lawsuit! The defense attorney acknowledges that the child died fifteen seconds after exiting completely from his mother's womb. He was therefore a real human person.

What happened? The accused and his lawyer had however shouted in front of the media that this fetus had died in the mother's breast and that there was no material for a murder charge. There was an admission of not guilty and we wanted a trial at all costs.
It is exceedingly rare that an accused person commits murder before even being tried. What happened?

In Canada, we must not talk about abortion, especially during the election campaign! You have to put your head in the sand and breathe through your nose. If there had been a trial in this explosive case, we would have witnessed the public opening of a national debate on abortion,
calling into question the right to kill in the womb, a real baby after 8 or 9 months of pregnancy.

We will never know what really happened for this murderer to plead so quickly and forgo a trial.

Today, everyone (the judge, the lawyers, the media, the feminist movements, our atheistic intelligentsia, our politicians, etc ...)
seems very happy with the turn of events. A sigh of relief in all directions is heard!

The worst is over! We will not open the Pandora's box. We will not discuss the rights of the fetus.
Babies will continue to be killed in the mother's breast until the last minute with complete impunity.

Canada, world champion in abortion, has just avoided the storm. The long-awaited trial will not take place. Everything is fine, Madame La Marquise!

In the West, abortion has become a scary, devilish and terrible scourge!
up
Thank you for your visit