Hungary in the sights of the
​European Union rainbow 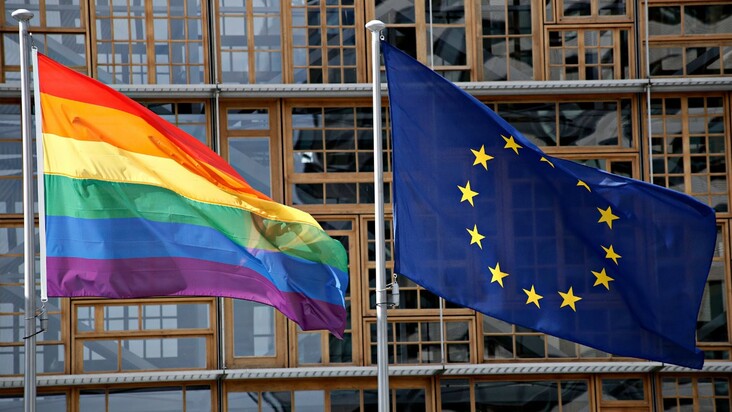 The European Union is a prison for sovereign peoples. A latest example is the battle undertaken by the European Commission against Hungary and Poland who are identitarians.

The Commission headed by Ursula von der Leyen has referred Hungary to the Court of Justice of the European Union over its anti-paedophilia law, which strengthens the protection of children and bans LGBT propaganda against minors. Brussels is also continuing its war against Poland, keeping stimulus funds blocked due to the country's opposition to abortion and rainbow dogmas.

The European Commission is throwing away the mask and referring Hungary to the Court of Justice of the EU for its law that prohibits the education and advertising of LGBTQI+ content to minors. And Poland is no better off.

The European Commission, at the periodic meeting on infringement procedures against member countries and after the approval of its rule of law report, announced yesterday that it had referred Hungary to the Court of Justice because it considers that the above-mentioned Hungarian law violates internal market rules, the fundamental rights of individuals (especially LGBT people) and EU values. The referral to the Court is the next step in the infringement procedure launched by the Commission on 15 July 2021, after the denunciation of 16 EU countries.

"Hungarian law," explains the Italian daily La Nuova Bussola Quotidiana, "provides for stricter measures against perpetrators of paedophilia and strengthens the protection of children. Some of the new rules limit (prohibit until the age of majority) minors' access to content and advertisements that "promote or depict" the so-called "deviation from personal identity corresponding to birth sex, sex change or homosexuality". According to the Commission, the Budapest Anti-Paedophilia Act violates a number of directives (on audiovisual media services, electronic commerce, freedom to provide services, transparency of the single market). Above all, for the Commission, the Hungarian law "also systematically violates several fundamental rights enshrined in the CHARTER of Fundamental Rights of the EU. These include the inviolability of human dignity, the right to freedom of expression and information, the right to private and family life and the right to non-discrimination, as well as the common values enshrined in Article 2 TEU'. »

LNBQ analyzes precisely the pressure of the gay lobby within the European institutions which thus relay the rainbow revolution:

"The Commission now depends not only on lgbt and abortion lobbies, but also on their parliamentary troops who influence the European Parliament and who, since the beginning of the legislature, have shamelessly demanded the 'head' of the Hungarian and Polish governments. In this line of blackmail, we read the approval, on 13 July, of the report of the European Parliament's Libe Committee (Civil Liberties, Justice and Home Affairs), which condemns the "deliberate and systematic efforts of the Hungarian government" to undermine the European values enshrined in Article 2 of the Treaty on European Union, a situation that has been aggravated by the lack of decisive action by the EU that would have contributed to the consolidation of a "regime". hybrid of electoral autocracy". MEPs also deplore the Council's failure to make significant progress in countering democratic backwardness and threaten that further delays in taking measures to protect EU values in Hungary would amount to a breach of the rule of law by the Council itself. »

Europe wants to impose LGBT and abortion dogmas on Hungary and Poland. In the long list of decisions taken by the Commission yesterday, there is also the decision to prosecute Poland further for having questioned the primacy of European law and not having sufficiently amended the law on the Court of Control of the Work of Judges. In this case too, these are measures by the Commission to keep the funds of the recovery plan blocked against a country that rejects abortion, LGBT ideology and welcomes nearly five million Ukrainian refugees at its own expense.

Despite having approved at the end of May the Warsaw recovery plan after the pandemic (35.4 billion euros, including 23.9 billion in subsidies), not a single euro has arrived in Poland. Warsaw pays a daily fine of one million euros imposed by the Court of Justice of the EU for the situation of its judicial system, with a cumulative total to date of at least 300 million euros. In this regard, on 27th May the Polish Parliament approved the reforms of the judicial system requested by the Commission, including the Disciplinary Judicial Chamber; then, at the end of June, it approved a draft law on the judicial system agreed by Polish President Andrzej Duda and Commission President Ursula von der Leyen. Unfortunately, Commission Vice-President Vera Jourová said on 6 July that the approved law is
not in line with what is requested, so the money will not reach Poland.
medias-presse.info.
Hungary in the sights of the European Union rainbow - medias-presse.info
up