Late abortions performed in the US:
Quebec wants to "repatriate services" 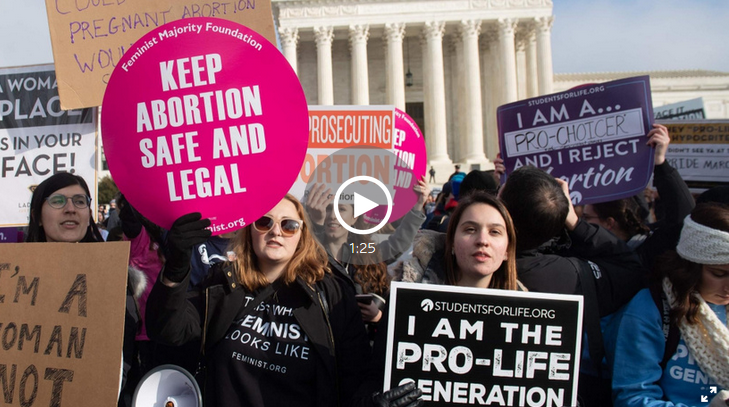 Faced with the evolution of the legal debate on abortion in the United States, the government of Prime Minister François Legault hopes that all Quebec women who request a late termination of pregnancy can be treated in the province in the future, whatever the reason for their decision, rather than having to go to specialized American clinics.
The Ministry of Health confirmed to La Presse yesterday, without specifying a timetable, that work was underway
to assess how "these services can be repatriated to Quebec".

Year after year, around 20 pregnant women are sent south of the border at state expense to undergo an abortion beyond 24 weeks of pregnancy,
as they cannot find a local health establishment able to provide it. do it or willing to do it.

A spokesperson for the Department, Marie-Claude Lacasse, explained that this decision was explained by the legal evolution of the debate on abortion
in the United States and the need for the Quebec government to guarantee this service whatever happens.

Ms. Lacasse declined to say whether discussions were underway with a particular hospital to provide late abortions.
She said it was necessary to "proceed with delicacy" in the case so as not to jeopardize possible talks.

“We don't want to take the risk, if the spotlight is placed on an establishment, that the establishment moves back. - Marie-Claude Lacasse, spokesperson for the Ministry of Health

The Ministry's move comes as Conservative elected officials from many American states are multiplying bills to restrict access to, or even ban, abortion.
The movement has accelerated since the appointment to the Supreme Court of two conservative judges by President Donald Trump.

The pro-life camp hopes that the highest court in the country will seize one of the causes of these laws, systematically challenged by the pro-choice camp, and take the opportunity to quash the famous judgment Roe c. Wade, or restrict its scope.
Beyond 24 weeks in only two states

Five others allow this type of intervention, but have no active clinic.
According to existing case law, other states have the obligation to authorize a late abortion if the mental or physical health of the mother so requires.
But many of them do not comply with this provision, says Ms. Nash.

She believes that the Supreme Court could very well end up lifting this requirement and allowing states to legislate legally even more restrictively.

The situation makes the Quebec government fear that caring for Quebec women will become impossible,
which justifies the search for an alternative solution.

Ms. Lacasse clarified that “the supply of services was not compromised for the moment”, since the two aforementioned States continue to
perform abortions without major restriction. However, the situation can change quickly.
"You need a plan B"

Dr. Jean Guimond, who has overseen the transfer program in the United States for several years,
indicated yesterday that he fully supports the Department's approach.

"We must have a plan B if we can no longer transfer women there," said the practitioner, recalling that the government
has the responsibility to ensure access to abortion for all stages of pregnancy.

An interruption in services resulting from a turnaround south of the border is a significant risk and is not theoretical, warns the practitioner. The Quebec program, he illustrates, had to be reorganized in disaster a few years ago, after the doctor with whom the government treated in Kansas had been killed.

Dr. Guimond notes that we must also take into account the fact that Quebec women who go to the United States to undergo
a late abortion could be the target of pro-life demonstrators, in a very fragile moment.

They could also experience difficulties in crossing the border if they came up against zealous customs officials,
even more so in a context where abortion arouses acrimonious debates, notes the practitioner.
A complex reality

Finding a Quebec establishment capable of performing unrestricted late abortions is not an easy task, since many hospitals with the
capacity to perform them regularly refuse to do so for ethical reasons.

In theory, due to the existing legal vacuum, the fetus does not have legal status until the moment of birth and abortion is allowed
regardless of the duration of the pregnancy, but the reality is more complex.

Dr. Guimond notes that cases where the fetus presents serious pathologies or those where the health of the mother
is compromised are traditionally managed in the province without problem.

Situations where the fetus and the mother are healthy turn out to be much more complicated and lead some practitioners to refuse the intervention.
It is often in such circumstances, in the absence of an alternative solution, that recourse to American clinics is decided.

The College of Physicians, in a reference document dating from 2012, noted that late abortion was ethically "acceptable" when there is "a high probability that the unborn child will be suffering from a serious fetal anomaly recognized as incurable at the time of diagnosis ".
It was also specified that the woman's decision should be "free, informed and supported".
Working committee

A spokesperson, Annie-Claude Belisle, said yesterday that the College "did not wish to comment" on the approach of the Department.

She said the discretion was aimed at "ensuring public protection", apparently referring to the need not to torpedo the ongoing repatriation efforts.
up