return
Disney execs want 'many, many, many LGBTQIA characters in our stories.' 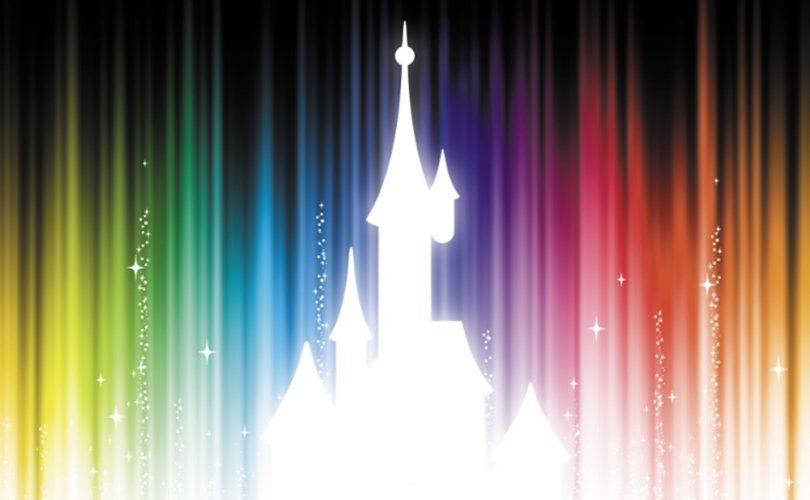 (LifeSiteNews) – Any lingering doubts about Disney’s social agenda were settled Tuesday with the release of leaked excerpts from a private “all hands meeting” about a Florida law to ban sexual proselytizing in K-3 public schools, in which various officials within the entertainment giant openly state their intentions to inculcate children with LGBTQ+ dogma via their film and television projects.

The ostensible subject of the conference was the Sunshine State’s newly enacted Parental Rights in Education law, which bans schools from teaching children in kindergarten through third grade about transgenderism and other sexuality-related issues, limits discussions of sexuality for older children to “age appropriate” content, and requires parents to be informed of any changes that could affect their child’s physical, emotional, or mental well-being.

Left-wing activists and their media allies have misleadingly dubbed the law the “Don’t-Say-Gay Bill,” framing it as a hateful attack on LGBT teachers and students and scoffing at the notion that it tackles a real problem, despite examples
of teachers engaging in LGBT activism in the classroom.

Among the revelations are executive producer Latoya Raveneau boasting of a “not-at-all-secret gay agenda” that involves “adding queerness” to children’s programming; production coordinator Allen March explaining his team has a “tracker” to ensure they create a sufficient number of “gender nonconforming characters,” “canonical trans characters,” and “canonical bisexual characters”; “diversity and inclusion” manager Vivian Ware explaining the company has purged the terms “ladies,” “gentlemen,” “boys,” and “girls” from its theme parks to create “that magical moment” for gender-nonconforming children; and more. 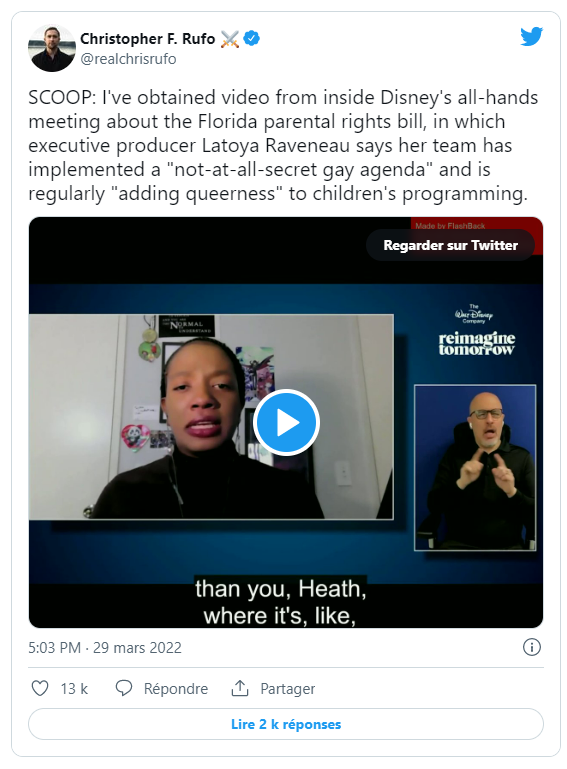 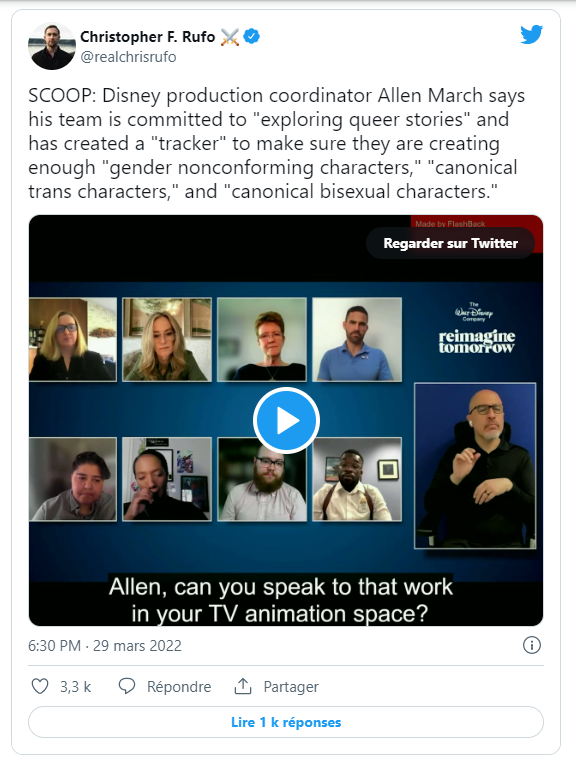 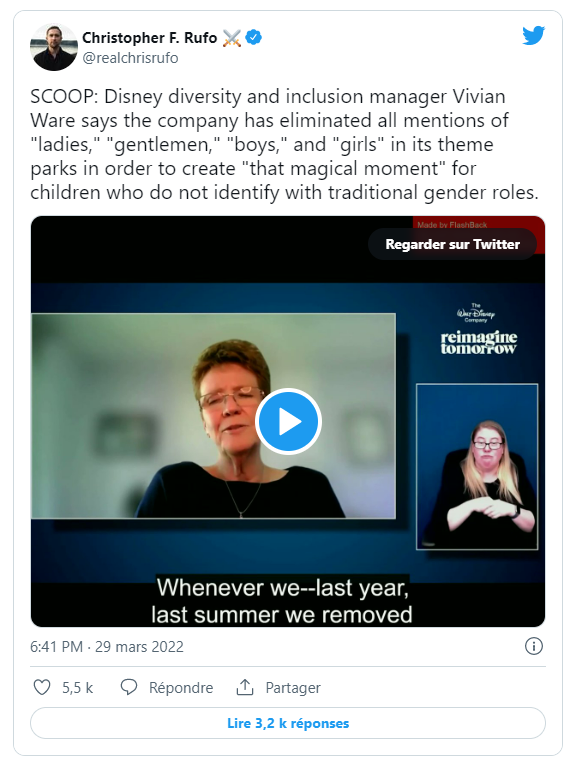 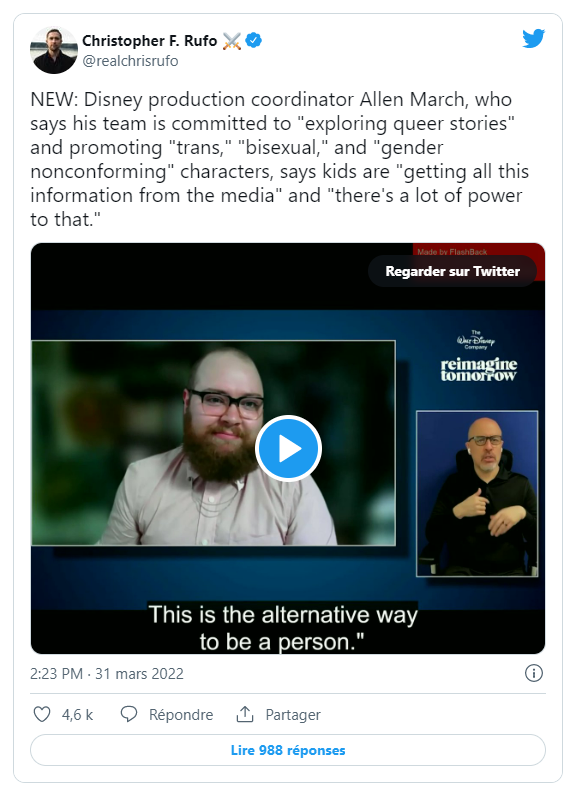 One clip that has gained particular attention features Disney corporate president Karey Burke declaring that “as the mother [of] one transgender child and one pansexual child,” she supports having “many, many, many LGBTQIA characters in our stories.” 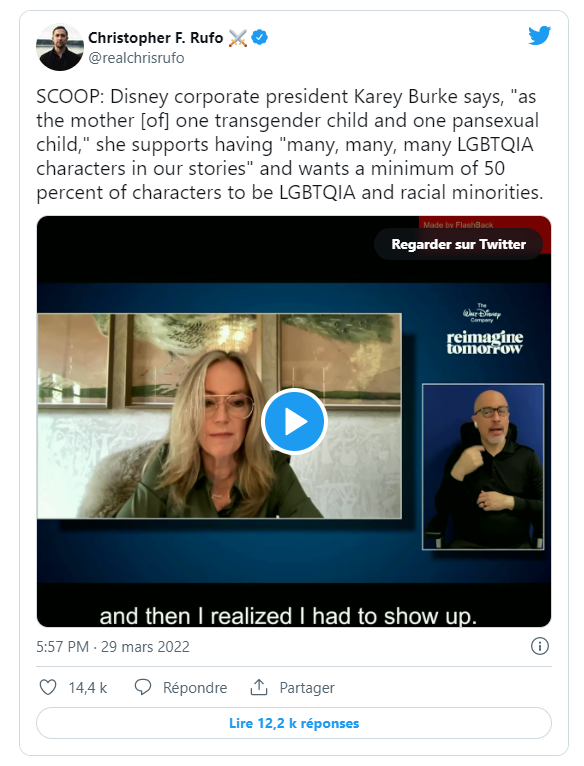 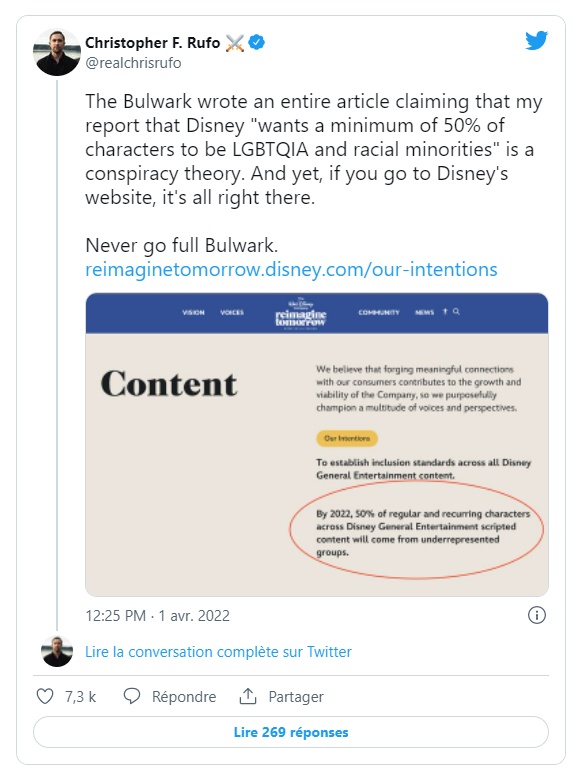 Elsewhere in the conference, one of Disney’s outside activism partners, Nadine Smith of the left-wing group Equality Florida, falsely tells LGBT Disney employees that Florida Republican Gov. Ron DeSantis and his top spokesperson, Christina Pushaw, want to “erase you, “criminalize your existence,” and “take your kids.” 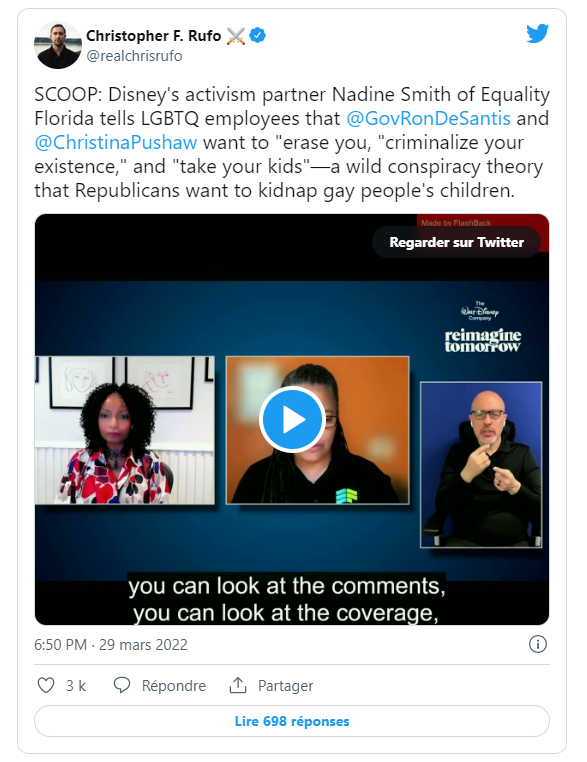 On top of the implicit misrepresentations of the new law’s purpose and effects, the charge is ironic in light of the fact that Pushaw was one of several conservative figures who generated controversy on the Right earlier this month for offering congratulations to gay conservative pundit Dave Rubin’s announcement that he and his “husband” had commissioned the conception of two children for themselves via surrogacy.

Once a unifying cultural institution, over the past several years Disney has steadily infused left-wing politics into the army of entertainment properties it owns, from appeasing LGBT “representation” demands in the Marvel Cinematic Universe, to firing and publicly defaming conservative former Star Wars actress Gina Carano. Disney has also introduced LGBT themes in a variety of its children’s media, most recently with the confirmation of a same-sex kiss in the upcoming Toy Story spinoff Lightyear.

Disney’s hardline stance against the Florida law follows a revolt from left-wing activists within the company who staged walkouts in protest of Disney’s initial muted reaction to the law. Meanwhile, more conservative Disney employees have released an anonymous open letter decrying the company’s internal climate of hostility toward “those of us whose political and religious views are not explicitly progressive.”

DeSantis, meanwhile, has responded with defiance, branding Disney as “fundamentally dishonest” hypocrites who “do not control this state.”

“You know what, if we … put in the bill that you were not allowed to have curriculum that discussed the oppression of the Uyghurs in China, Disney would have endorsed that in a second,” DeSantis said, a reference to the company’s much softer approach to the Chinese government and its much harsher treatment of minority groups.