RETURN
The demand that young people who have critiques of their transition process be silenced, ignored, and never interviewed is disgusting – an attempt to erase their experiences and accuse anyone who speaks to them of bigotry. 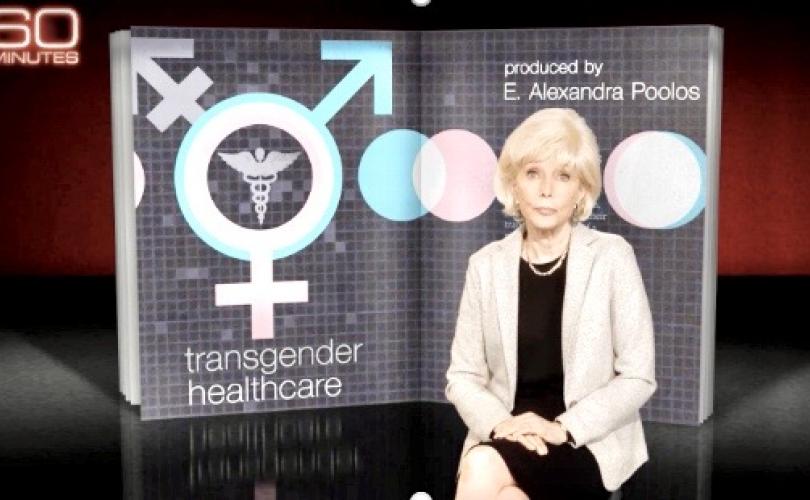 (LifeSiteNews) – An eye-opening CBS 60 Minutes report on young people who experienced regret and chose to detransition after being rushed by doctors and counselors into undergoing transgender hormonal and surgical treatments has met with a backlash from LGBT activists for attem`pting to tell the truth about an important medical issue.

The existence of detransitioners – those who seek to reverse the ravages of transgender medical treatments – is an inconvenient truth for LGBT activists who want to suppress stories challenging the preferred narrative that some peoples’ bodies do not match their gender, and that ‘transitioning’ is a wonderful means to make their lives whole.

Their existence proves that narrative false and risks destroying the burgeoning lucrative market for gender clinics that have sprung up around the country and Big Pharma that sees in transitioners potential lifetime customers.

“It greatly concerns me where the field has been going. I feel like what is happening is unethical and irresponsible in some places,” Dr. Laura Edwards-Leeper, a psychologist at Boston Children’s Hospital’s youth gender clinic, told interviewer Leslie Stahl.

“Everyone is very scared to speak up because we’re afraid of not being seen as being affirming or being supportive of these young people or doing something to hurt the trans community. But even some of the providers are trans themselves and share these concerns,”
Edwards-Leeper said.

Young people interviewed by Stahl shared a common story: They felt the urge to “transition” after being exposed to the idea via social media. They then were “blindly affirmed” by mental and physical health professionals too eager to fast-track their treatments.

“I didn’t get enough pushback on transitioning,” a young man named Garrett said. “I went for two appointments and after the second one I had, like, my letter to go get on cross-sex hormones.”

“I had never really been suicidal before until I had my breast augmentation,” he explained. “And about a week afterwards I wanted to, like, actually kill myself. Like, I had a plan and I was gonna do it, but I just kept thinking about, like, my family, to stop myself.”

“It kind of felt like, how am I ever going to feel normal again, like other guys now?” he said.

“I can’t believe that I transitioned and detransitioned, including hormones and surgery, in the course of, like, less than one year. It’s completely crazy,” Grace Lidinsky-Smith said.

Lidinsky-Smith, who experienced depression in her 20s and sought to transition after watching transgender stories on social media, said a gender therapist she met on the internet  quickly recommended her for medical transitioning.

“She didn’t really go into what my gender dysphoria might’ve been stemming from. We only did a few sessions,” she said.  After taking testosterone for just four months, she underwent a double mastectomy. She then quickly de-transitioned.

“I started to have a really disturbing sense that a part of my body was missing, almost a ‘ghost limb’ feeling about being like, there’s something that should be there. And the feeling really surprised me, but it was really hard to deny,” Lidinsky-Smith said.

The backlash from the LGBT world was swift.

“If more young people are coming out as trans or queer today than 20 years ago, it's because we've made the world safer for them to come out. Period,” O’Hara claimed. 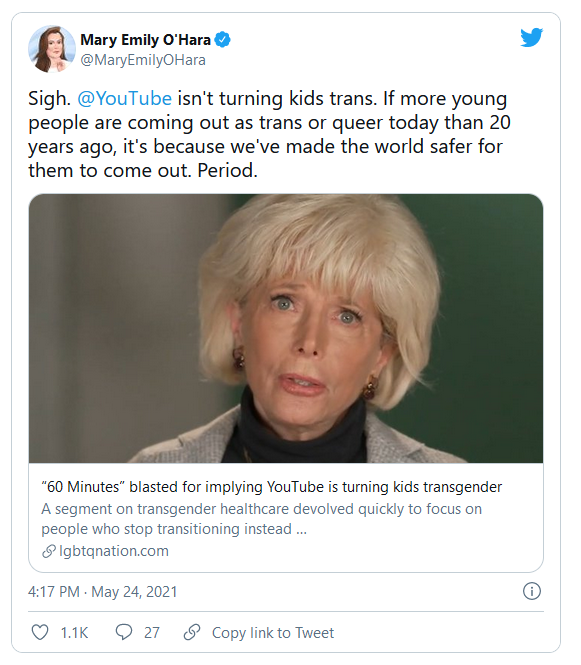 “Giving airtime now to young people who are ‘detransitioning’ while the whole trans community is under attack is rather like running a segment on Asian Americans who believe calling it the ‘China Virus’ is perfectly fine,” tweeted George Takei, an elderly gay actor better known as Mr. Sulu on the original Star Trek TV series. “Did you think this through, 60 Minutes?” 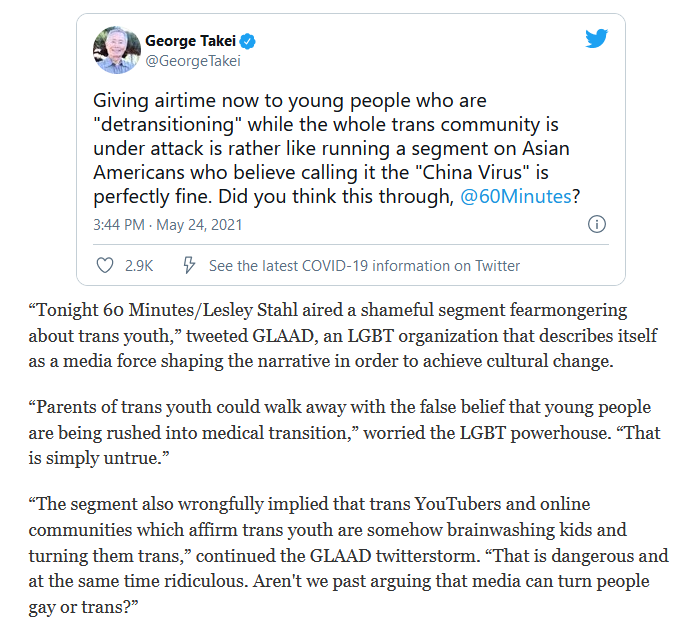 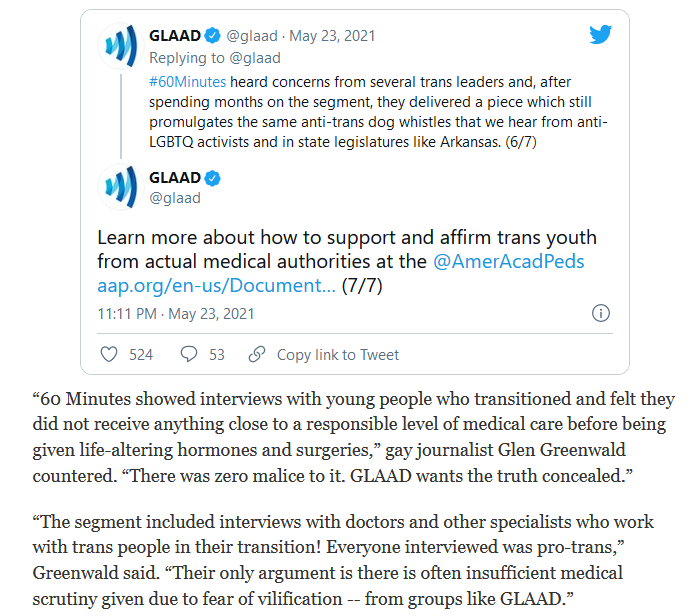 “The demand that young people who have critiques of their transition process be silenced, ignored, never interviewed is disgusting -- an attempt to erase their experiences and accuse anyone who speaks to them of bigotry,” Greenwald declared. 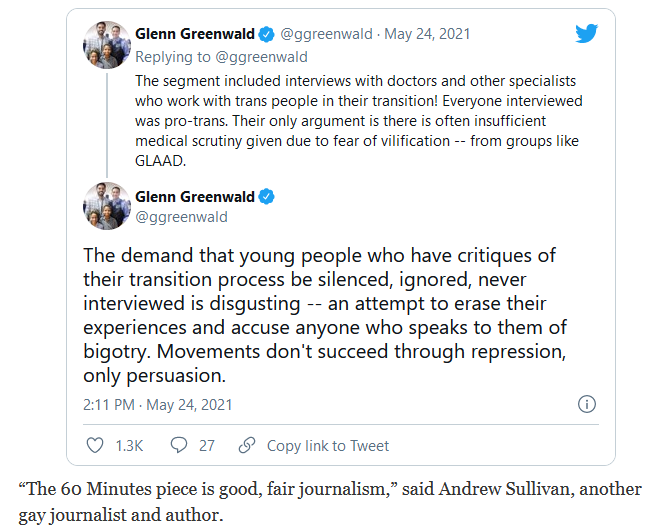 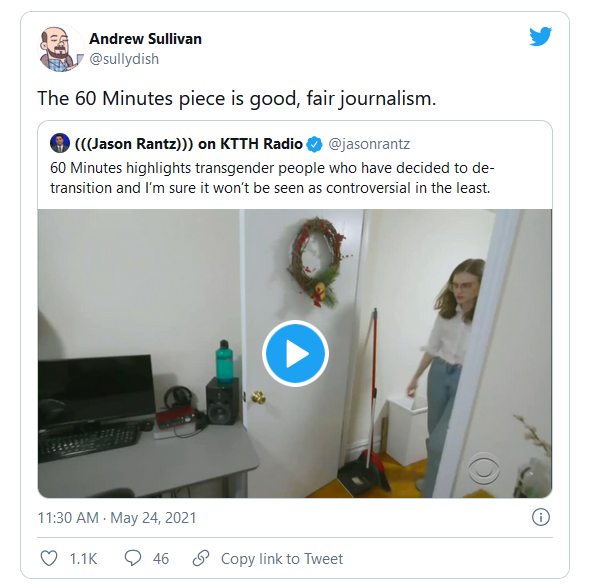 “It takes enormous courage to speak out as a detransitioner - as Hormone Hangover (Grace Lidinsky-Smith) did in this ‘60 Minutes’ episode clip,” asserted journalist Abigail Shrier, author of the acclaimed Irreversible Damage: The Transgender Craze Seducing Our Daughters.

“She will no doubt face torrents of hate. But she just may save thousands of girls,” Shrier suggested. 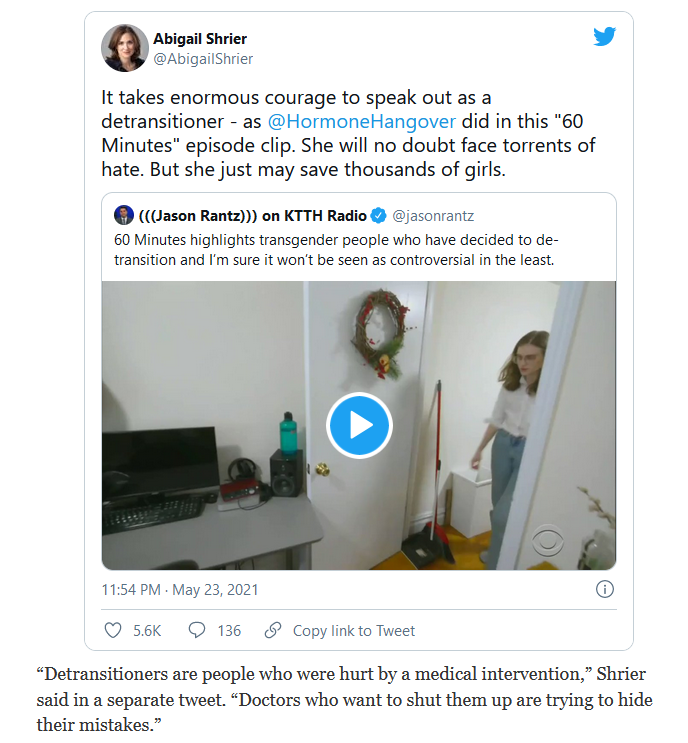 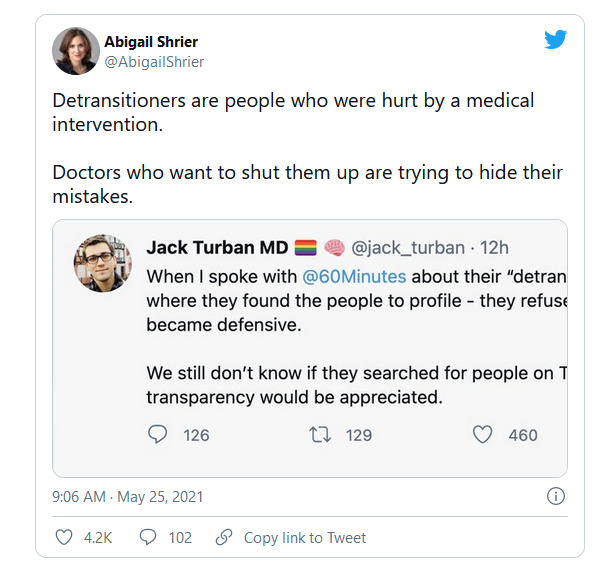 “There needs to be better mental health assessments for those claiming or saying they are transgender rather than prescribing hormones after two or less appointments,” KathyGrace Duncan, a woman who formerly lived as a man after having undergone hormonal and surgical treatments, told LifeSiteNews.

“Questions about abuse, rejection and abandonment” need to be explored deeply, said Duncan, who said she found the 60 Minutes report to be “heartbreaking.”

Duncan suggested that those who claim to be “experts” in the nascent field of medical transitioning are in reality “experimenting.”

“In talking with transgender people who have had all the surgeries there have been multiple complications,” said Duncan, with “the organ still not working as hoped,” accompanied by  “multiple infections.”

If the experts can’t stop infections or make the new, improvised sexual organs they’ve fashioned for their transgender patients work correctly, “How are they experts?” she wondered.

“I’ve got 9,000 emails in my inbox from people who are struggling with this,” said Walt Heyer, a man who formerly lived as a woman after undergoing medical treatments and surgery, then detransitioned 30 years ago, reverting from “Laura” back to Walt.

Walt is a popular author, speaker, and founder of SexChangeRegret.com, a lifeline for those who are desperate
to find help to revert to their biological sex.

Heyer gave credit to CBS for addressing the topic but felt the news magazine refused “to actually dig in and show that over a long period of time changing genders is very destructive.”

He recommends asking young people who display gender dysphoria, “Why do you want to destroy who you are? That’s a completely different way of looking at this.’

“The next question is: ‘What has happened that caused you to not like who you are?’’’ said Heyer, noting that often a hidden history of sexual molestation or other trauma comes to the surface.

“Something has happened to every one of these individuals at some time in their lives to cause them to not like who they are,” Heyer said, “and then they take on this idea of destroying who they are.”

“It’s not about becoming someone else, because you can’t really do that: The only thing you can do is destroy who you are,
” he said. “I know. I did it.”

Detransitioners are simply trying to “put back what they broke; themselves,” he explained.

Heyer told LifeSiteNews that CBS should have contacted him for their story.

“They won’t talk to me because I’m too outspoken. You know, I detransitioned 30 years ago, and I’ve been at this in some way, shape or form for 76 years. I don’t think there’s too many people that can lay those credentials on the table.”