RETURN
​‘Religious minorities faced harassment, detention, and even death due to their faith or beliefs,’
​religious freedom commission says about Afghanistan. 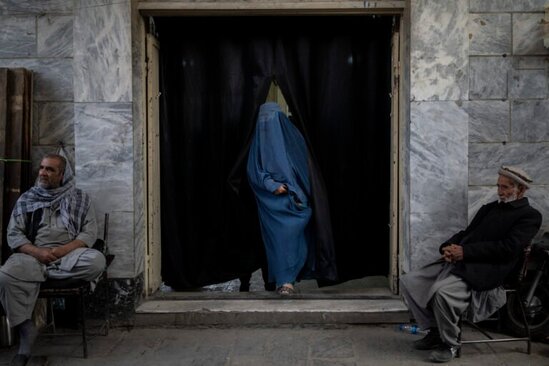 A woman leaves a Shiite shrine in a predominantly Hazara neighborhood while two men stand guard in Kabul, Afghanistan, Tuesday, Nov. 9, 2021. A strange, new relationship is developing in Afghanistan following the takeover by the Taliban three months ago. The Taliban, Sunni hard-liners who for decades targeted the Hazaras as heretics, are now their only protection against a more brutal enemy:
the Islamic State group. (AP Photo/Bram Janssen)

(RNS) — The U.S. Commission on International Religious Freedom recommended that Afghanistan be added to the State Department’s list of worst religious freedom violators, citing the changes that resulted when the Taliban took control of the country last year.

The federal panel said in its annual report released Monday (April 25) that the regime change has meant worsening conditions for religious liberty and significant deterioration of human rights overall.

“Religious minorities faced harassment, detention, and even death due to their faith or beliefs,” the bipartisan commission said in the report’s introduction. “The one known Jew and most Hindus and Sikhs fled the country. Christian converts, Baha’is, and Ahmadiyya Muslims practiced their faith in hiding due to fear of reprisal and threats from the Taliban.”
The last time the watchdog commission recommended Afghanistan be considered “a country of particular concern,” the State Department designation that signals ongoing, systematic and egregious religious freedom violations, was in 2001, just prior to the ouster of the previous Taliban regime that controlled most of the country for five years.

The Taliban has been on the State Department’s list of “entities of particular concern”
every year since federal officials began that designation in 2018.

The 2022 annual report details conclusions of commissioners’ research during the previous year, from genocide to charges of blasphemy to punishment for listening to particular religious teachings. But during a virtual news briefing on Monday, they also noted their current concerns about Russia — already labeled a country of particular concern — and its invasion of Ukraine.

“We fear, and I’m sad to say, that violence will continue to increase because of Russia’s blatant violation of religious freedom in Russia and in this conflict that exists in Ukraine,” said Khizr Khan, one of the newest commissioners. “We will continue to watch with great concern, and we hope that the turmoil ceases sooner than it appears, so such are our prayers and our good wishes
for the people that are suffering in this turmoil.”

At a virtual public event later in the day, Republican Sen. Marco Rubio of Florida echoed commissioners’ comments about Russia, decrying President Vladimir Putin’s invasion that has led to persecution of non-Russian Orthodox Christians and destruction
of Jewish cultural sites and Holocaust memorials.

“I’ve authored legislation to extend USCIRF’s mandate,” he said in prerecorded remarks about the commission, which was reauthorized in 2019 with three years of funding. “I’m hopeful the bill will be taken up soon so your good work can continue without interruption.”

House Speaker Nancy Pelosi also spoke in support of USCIRF’s work, noting that its outspokenness
about religious liberty in China had prompted a response.

“Seven of your commissioners have been sanctioned by China’s government,” said the California Democrat, also in prerecorded remarks. “Clearly your advocacy is having an impact and even striking a nerve.”

USCIRF renewed its recommendation that the Central African Republic be placed on the State Department’s “special watch list,” its second-highest designation. Last year the panel suggested CAR be dropped due to a reduction in violence against people based on their religious identity, but the new report says circumstances have recently worsened.

“During 2021, Central African authorities and their partners committed egregious and ongoing violations of religious freedom in CAR — including targeted abductions, torture, and killings of Muslims,” the report stated.

USCIRF also has requested that the State Department redesignate the following nations as countries of particular concern, or CPCs: Myanmar, (referred to as Burma on the official list), China, Eritrea, Iran, North Korea, Pakistan, Russia, Saudi Arabia, Tajikistan and Turkmenistan.

In addition to Afghanistan, the watchdog requested the following countries also be cited as CPCs: India, Nigeria, Syria and Vietnam.

The State Department has listed three countries, Algeria, Cuba and Nicaragua, on its special watch list. In addition to CAR, the commissioners requested that these eight countries be included: Azerbaijan, Egypt, Indonesia, Iraq, Kazakhstan, Malaysia, Turkey and Uzbekistan.

The report, which offers key ways for presidential administrations and Congress to implement the 1998 International Religious Freedom Act, noted the confirmations of Rashad Hussain as the new U.S. ambassador-at-large for religious freedom and Deborah Lipstadt as the special envoy to monitor and combat antisemitism.

It also reiterated USCIRF commissioners’ concern that the State Department decided not to redesignate Nigeria as a CPC, “despite religious freedom conditions not changing significantly from the previous year,” and “completely bypassed” downgrading it to the special watch list. The new report details “particularly severe religious freedom violations” that occurred there in 2021.

The annual report has often been based, in part, on fact-finding trips by commissioners, but those were halted during the last two years due to the COVID-19 pandemic. Some of them recently resumed travel with a weeklong visit to Uzbekistan, said Vice Chair Nury Turkel, meeting with government and civil society leaders as well as members of persecuted religions.

This story has been updated.