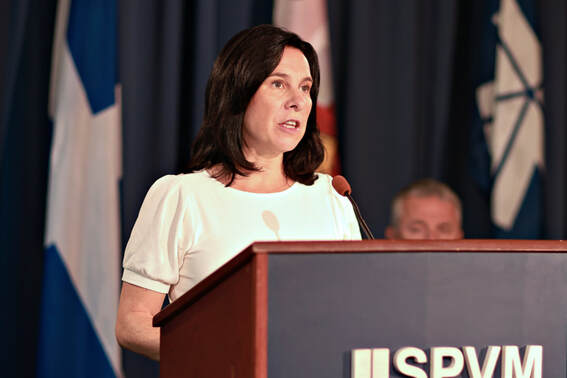 (Montreal) The mayors of the five largest cities in Quebec are calling for the leaders of the main federal parties to “clearly and firmly” commit to the fight against firearms trafficking.
The mayor of Montreal, Valérie Plante, the mayor of Quebec, Régis Labeaume, the mayor of Laval, Marc Demers, the mayor of Gatineau, Maxime Pedneaud-Jobin and the mayor of Longueuil, Sylvie Parent, summoned the press on Tuesday at the Vieux- Port of Montreal to deal with the subject with the avowed aim of putting pressure on the leaders on the eve of the leaders' debate in French.

Their exit comes as the subject of assault weapons continued to haunt the Conservative leader on Monday, for a fourth straight day.

Erin O'Toole on Sunday renounced one of his promises by announcing that he would not ultimately abolish a decree banning certain types of military-style weapons, while promising to review the classification of these weapons. According to his liberal opponents, such an exercise is simply aimed at re-authorizing the possession of some of these weapons.

In its list of demands on federal parties, Montreal called at the end of August for a pan-Canadian ban on the private possession of handguns and assault weapons in order to tackle "the source of the problem" of the rise in episodes of violence by fire arms.

A Liberal government bill, tabled in February, sent handgun management into the backyard of municipalities, which sparked an uproar. Survivors, family members of the victims of the 1989 massacre at the École Polytechnique de Montréal, and students from the time of the carnage had even warned Prime Minister Justin Trudeau that they would never accept his being in Montreal again. their sides during the annual commemorations of the shooting.

In a gesture of disavowal, the elected representatives of the National Assembly then unanimously demanded that Ottawa delegate to them the power to ban handguns. However, the Quebec government has never said that it would legislate in this area.

The Liberal Party of Canada is now promising to hand over the power to legislate on handguns to the provinces, a position that continues to disappoint the PolySeSouvient group, which notes that Ontario, Manitoba, Saskatchewan and Alberta do not do not want it.

The co-president of the liberal campaign for Quebec, Pablo Rodriguez explained on Saturday that it is a “demonstration of flexible and cooperative federalism”.

For the Bloc Québécois, "failing to have the courage to act, Ottawa must at least give the power to ban handguns in Quebec and the provinces".

The platforms of the Conservative Party of Canada and the New Democratic Party do not specify a ban on handguns in specific territory.

The Conservatives say they want to seek "to keep guns out of the hands of criminals", while the New Democrats pledge to work to keep guns "off our streets" and to tackle "contraband". 'guns and organized crime'.

Gun violence has increased sharply in recent years in Canada. According to Statistics Canada, the number of such offenses rose from 3,544 in 2019 to 4,137 in 2020, a 15% increase, the sixth consecutive annual increase.