Abby Johnson to Canada March for Life: ‘Stop being so dang polite’ in abortion fight 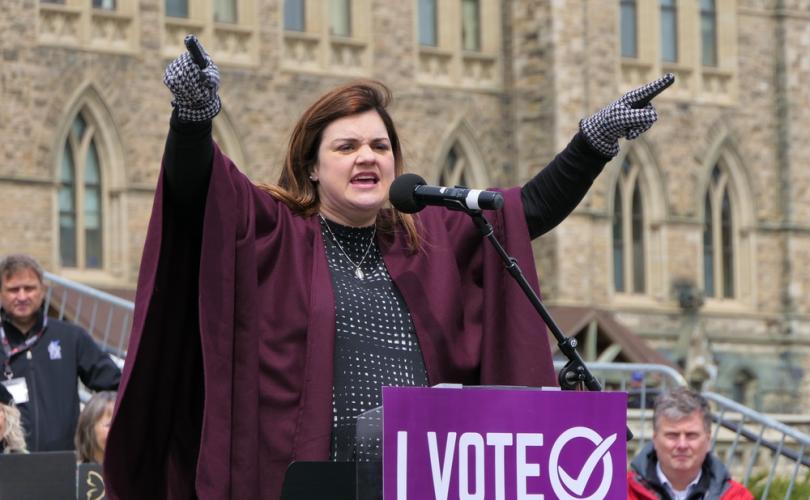 OTTAWA, May 10, 2019 (LifeSiteNews) — Abortion won’t end in Canada until pro-life advocates stand up and say enough is enough
Abby Johnson said at the March for Life rally Thursday.

The author of Unplanned and former Planned Parenthood abortion facility manager exhorted the thousands
of people on Ottawa’s Parliament Hill to “be not afraid.”

“One thing I have learned in Canada: you are the most polite people in the world,” Johnson said.

“You gotta stop being so dang polite. Life is on the line. Children are being killed, dismembered in their mothers’ wombs. There is nothing polite about abortion, and it is time for us to stop cowering to the liberal media, to your Liberal parliament. Enough is enough.”

The March for Life marks 50 years since abortion was legalized in Canada, and an estimated 4 million children
have been aborted in the country in the half-century since then.

There are now 300 abortions a day in Canada, which has no law restricting abortion.

Johnson’s book Unplanned tells how she walked out of Planned Parenthood after witnessing an ultrasound abortion of a 13-week-old unborn child.

She is now a Catholic, 37 weeks pregnant with her eighth child, and the founder of And Then There Were None, a proactive ministry to abortion workers, with Unplanned adapted into a hit movie that has inspired many Americans to reject abortion and take up the pro-life cause.

Johnson, a Texan, did not spare media, Christians, or pro-lifers in a bracing address that was often interrupted by roars of approval from the crowd.

To the media “that may be tempted to spend the bulk of their time … giving attention to the people over there, the vile protesters with their vile signs who are defending killing the most defenseless among us,” Johnson pointed out that wasn’t the real story.

To Christians and their leaders, Johnson said: “It is time for us to stop cowering in our Christian churches.”

“We need a radical spiritual conversion in Canada, and that is going to start in the church. And my question
to the clergy who are here today: what are you afraid of?” said Johnson.

Johnson invoked the words of Pope Saint John Paul II: “Be not afraid.”

“If abortion is going to end, it is not going to end in the halls of Parliament,” she said.

“It is going to end because each one of you raised your voices and said enough. No more death, no more evil. Not on our watch.”

She emphasized that it’s essential that pro-lifers pray, but they must also act.

“It is time to break free from the fear that binds us. To heck with the repercussions. It is time to use our voices and act, and don’t stand there and tell me that I’m going to pray for an end to abortion; you better pray, and you better do something with that prayer,” said Johnson to loud applause.

She also said the movie Unplanned would make it to Canada.

Lisa Wheeler, co-producer of the movie, said in a press conference Wednesday the producers had effectively been blocked
from distributing the film in Canada.

The impact of the Unplanned has “been amazing,” Johnson told EWTN’s Kevin Dunn.

“We’re over a month out, and I’m still waking up to messages from people saying ‘I walked into the film pro-choice, I walked out pro-life,’” she said.

“I’m getting messages from women who went into the film who were considering abortion…
then walked out and chose life for their children,” added Johnson.

“We’ve had about two dozen abortion workers contacting our ministry And Then There Were None, finding hope in Christ, and healing,” she said.

“So I mean the miracles, they just keep coming. They keep happening, and that’s the power of God.”

The event continues today with an all-day youth conference.
up