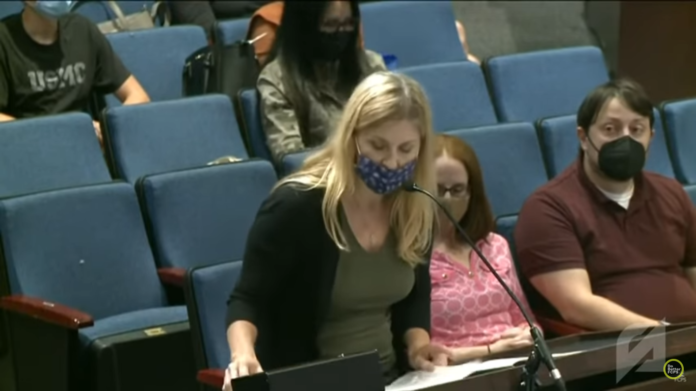 First, in Lake Travis, Texas, former school board candidate and mom Kara Bell read aloud from the 2015 novel “Out of Darkness” which was found in the Hudson Bend Middle School library.

Her microphone was then cut off, although she continued with her comments regardless.

The book has since been pulled from Hudson Bend and Bee Cave Middle Schools and its contents reviewed, according to KXAN.

Meanwhile, a Virginia mom was stunned after she probed her child’s school library after seeing video
of Bell’s comments to the school board earlier this month.

In jaw-dropping irony, Langton’s mic was cut off as she read the sickening quotes and she was told
“I’m sorry, there are children in the audience here.”

Yes — board members were concerned that children, which the Daily Wire was told by several attendants of the meeting were not actually present, might overhear the passages read from books that were available in the high school library.

“Do not interrupt my time! I will stand here until my time is restored and my time is finished. These books are in stock and available in the libraries …” Langton hotly replied, before she was again interrupted by board members, one of whom said, “For high school students, ma’am!”

After her mic was turned off, she began to loudly read off the laws against circulating child pornography as the crowd began chanting “Go to jail!” prompting nearly all the members of the school board to leave.

Later, Karl Frisch, a board member who as The Daily Wire noted does not have any children and works to promote LGBT issues in Fairfax County schools, took to Twitter in what appeared to be a defense of the material that Langton had attacked. 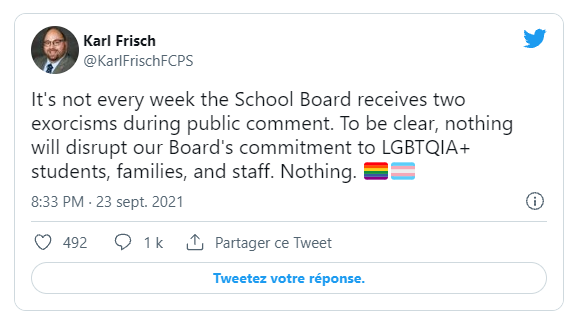 “It’s not every week the School Board receives two exorcisms during public comment,” he wrote. “To be clear, nothing will disrupt our Board’s commitment to LGBTQIA+ students, families, and staff. Nothing.”
Elizabeth
https://elizabethjohnston-org.translate.goog/watch-moms-read-books-from-school-library-containing-anal-sex-pedophilia-at-board-meeting/?utm_source=rss&_x_tr_sl=auto&_x_tr_tl=fr&_x_tr_hl=en&_x_tr_pto=nui,elem​
UP