Québec mother wants her 4-year-old son to die by euthanasia: ‘No possibility that his quality of life will improve’

RETURN
​Abel is severely disabled, he is deaf, lives with a severe intellectual disability and has daily intestinal problems and has already come close to death several times, prompting his mother to petition for child euthanasia. 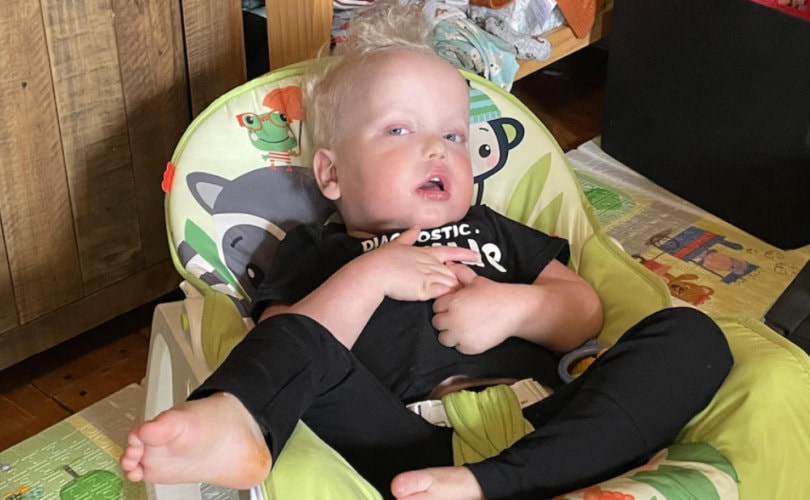 (Euthanasia Prevention Coalition) – The disability community has been rightly concerned with the cultural attitudes towards people with disabilities. This story clearly warns us about the pressure to extend euthanasia to children
but also the belief that it is OK to kill children with disabilities.

An article by Fabienne Tercaefs for Radio Canada on August 12, 2021 (Google translated) concerns Karie-Lyn Pelletier, from the L’Islet region in Québec, who wants her son, Abel, who has Mednik syndrome to die by euthanasia (MAiD).

According to the article Abel is severely disabled, he is deaf, lives with a severe intellectual disability and has daily intestinal problems and has already come close to death several times. His mother stated:

According to the article Karie-Lyn wants euthanasia expanded to children. On August 11, she invited her Member of Parliament Bernard Généreux (CPC) and Senator Pierre-Hugues Boisvenu to her home to discuss extending euthanasia to her four-year-old son Abel.

According to Tercaefs, Bernard Généreux stated:

The Conservative member believes that the subject must be broached, even though it is a delicate and, above all, very emotional issue. “These are not easy subjects, as a parliamentarian. There is no such thing as perfect law in this area.
You have to go to people who have extraordinary experiences.”

Senator Pierre-Hugues Boisvenu stated that he wants to champion the cause of child euthanasia. Tercaefs reported that (google translated):

He wants Karie-Lyn Pelletier to testify before the Senate to explain what she wants and, perhaps, to help change attitudes around end-of-life care. When we call on families who are going through the tragedies to which the laws must address, it is truly our experts at heart who make sure they will influence senators.

Tercaefs reported that Michel Bureau, President of the Commission on Life Care said that the issue of child euthanasia was being debated:

Michel Bureau recognizes that medical assistance in dying for children remains a taboo subject. In addition, he specifies that one must be extremely careful to avoid eugenics. “This is what is dangerous; a slippage that only allows those who are beautiful and perfect to live,” warns the president of the Commission on Life Care. We must take the time to look at the question.

This problem is even more complicated than that of mental health.

For those who claim that legalizing euthanasia does not lead to a “slippery slope” think again.

Sadly, our Canadian current government wants to further expand euthanasia. It is my fear that this story, or a similar story, will cause parliament or the courts to agree to expand euthanasia to children. As I said, there is no clear line in the sand.
Canada is now having an election. Clearly change is necessary.