RETURN
Trudeau said his government will have something ‘in place in the coming weeks’ for this summer’s travel season. 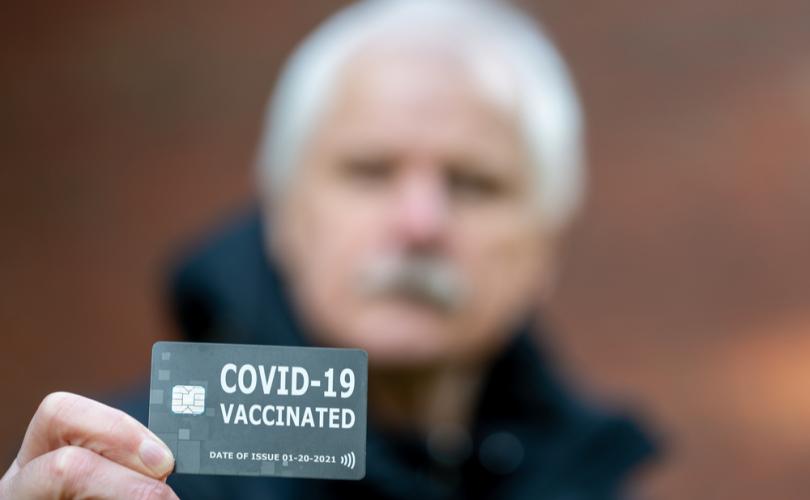 OTTAWA, Ontario,(LifeSiteNews) — Canadian Prime Minister Justin Trudeau today confirmed his government is working on “two tracks” to prove one’s vaccine status, and in the fall will be rolling out a system of “national certification of vaccination status” that travelers can use to prove they’ve had the “full” two doses of the COVID-19 jab.

“We are working on two tracks in terms of proof of vaccination for Canadians who wish to travel,” said Trudeau today at a press conference. “First of all, in the initial phase were going to be working with the ArriveCAN app in ways that people can upload an image of their paper proof of vaccination or online proof of vaccination so that the border agents on their return to Canada
can verify indeed that they are fully vaccinated.”

Trudeau said his government will have something “in place in the coming weeks” for this summer’s travel season.

Trudeau recently announced his government was “right now” working on “certificates of vaccination”
for travel with its allies, saying they are to be “expected” soon.

Today, Trudeau confirmed earlier reports that a “broad consensus” has been reached among the nation’s premiers to work to create “a proof of vaccine credential” system for travel.

He said that they are working with the provinces on a type of “national certification of vaccination status”
that will be “easily” accepted around the world.

According to a CBC report about the federal government’s use of the ArriveCAN app, a source said, “The app will allow travelers to take a photo or upload a snapshot of their vaccine documentation into the app before going through customs.”

As it stands now, all travellers arriving to Canada must use the ArriveCAN app to submit their “travel and contact information, including a suitable quarantine plan, electronically,” before crossing the border or boarding a flight.

In Canada, provinces have jurisdiction on all health matters, which would include issuing any type of proof of one’s vaccination status.

Allison Kindle Pejovic, a lawyer for the Justice Centre for Constitutional Freedoms (JCCF), recently told LifeSiteNews that a “vaccine passport system creates a two-tiered society whereby those who have chosen to be vaccinated are treated differently and discriminatorily compared to those who have not chosen to get the vaccine.”

Trudeau’s announcement comes on the same day Canada’s federal court ruled that quarantine hotels imposed by the government of Trudeau since January — and for which travelers must pay — are constitutional.

The court, however, also ruled that a pastor’s rights were violated when she was confined to a quarantine hotel against her will.

Canada’s Health Minister Patty Hajdu recently confirmed that, starting in early July, Canadians who have had the full two doses of a COVID-19 shot do not have to quarantine for 14 days, as long as they produce a negative test.
Also today, the Trudeau government decided to extend Canada’s closure of the border with the United States until July 21. The current closure agreement was set to expire on June 21.

Currently, both Manitoba and Quebec have forms of vaccine proof one can attain in digital form.

Recently, Manitoba Premier Brian Pallister officially launched its immunization card program for those who have received both doses of a COVID-19 vaccine. The new immunization card allows the vaccinated more freedom over those who choose not to get the experimental shots.

In May, the Quebec government announced that they will now send “electronic proof” in the form of a QR code
to those who have had a COVID-19 jab.

The Canada Border Services Agency (CBSA) recently confirmed it will open an “Office of Biometrics and Identity Management” which will with use microchips embedded in Canadian passports to monitor international travel movements.