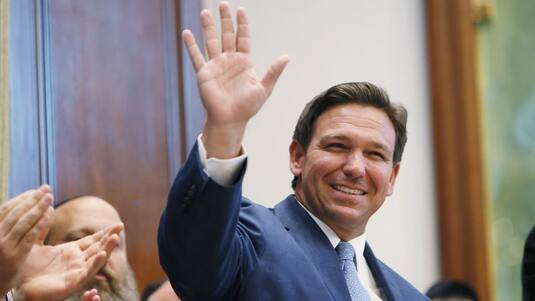 The majority of Americans support a ban on teaching young children about sexual orientation and transgender
issues in public schools, a new poll has found.

The latest survey shows broad support for a new Florida law, which became a culture war flashpoint pitting Republicans and family groups against major corporations and celebrities. Disney joined the public opposition to Florida Gov. Ron DeSantis (R) signing the “Parental Rights in Education Bill,” which says a “school district may not encourage classroom discussion about sexual orientation or gender identity in primary grade levels,” and only in an age-appropriate manner in subsequent grades. (Disclosure: The Daily Wire has announced plans for kids entertainment content.)

The Golden/TIPP poll, completed on April 8, finds that Americans are nearly twice as likely to support the law than to oppose it. A total of 57% of Americans agreed with the legislation, while only 31% said they disagreed.

“Interestingly, a majority, irrespective of party affiliations and ideologies, backed the bill, except for liberals,” the pollsters said. Republicans (73%), Democrats (51%), and independents (54%) agreed with the law’s parameters. Self-described “liberals” split,
with 42% backing the new law and 53% opposing it.

Some left-of-center personalities have said the new law does not go far enough to protect children from controversial and disputed sexual and gender ideologies in the classroom. “When I first heard about Florida’s Parental Rights bill, I was shocked it only protects children K-3,” said former Rep. Tulsi Gabbard (D-HI), a 2020 Democratic presidential hopeful. “Third grade? How about 12th grade — or not at all.”

The Golden/TIPP poll shows public acceptance of the law increasing since mid-March, when 50% of Americans publicly said they opposed teaching K-3 children about sexual and gender identity in a Politico/Morning Consult poll.

It also confirms a survey performed by Lucid on behalf of The Daily Wire and released in March, which found 64% of Americans support the Florida child protection legislation — including 62% of Democrats and 57% of registered independents.

The trio of polls seem to refute claims by the bill’s corporate detractors and the LGBT movement that these educational limits lack popular support. For instance, Disney heiress Abigail Disney said “most Americans are offended by” the bill “and wish it would just go away.”

Other liberals said the bill insulted the intelligence of Florida’s children. “As a former teacher, I want to make it clear that these children are more smarter [sic] than we think they are,” Florida State Senator Shevrin Jones (D) told MSNBC’s Joy Reid in January.

Jones’ fellow Democrats and some in the legacy media branded the measure as a controversial
“Don’t Say Gay” bill, something TIPP called “a branding disaster.”

Most Americans told Golden/TIPP pollsters they found it inappropriate and inaccurate to call the Parental Rights in Education law — which never uses the term “gay” and does not prohibit the use of the word — a “Don’t Say Gay” bill. The poll found independents and moderates most likely to find the term misleading.

“Democrats in Florida, Hollywood celebrities, President Biden, and others leveraged the inappropriate nomenclature to mount opposition,” pollsters said. “The moral here is that Americans can see through the spin.”