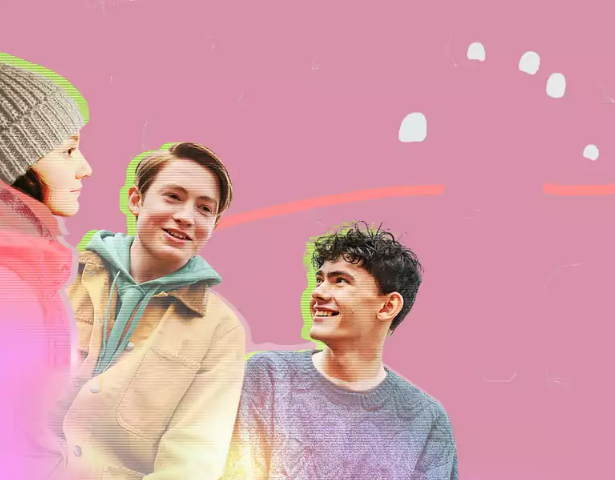 From the tormented and intimidated character of the 1990s to the cool and assumed teenager of the 2020s, LGBTQ+ representations have evolved a lot on the small screen. Is this a reflection of a change in attitude towards diversity among the rising generation?

The British series Heartstopper tells a teenage love story. The first butterflies. The crazy hope that it will be reciprocal. The first kiss. Presented since April on Netflix, this romantic comedy is both adorable and classic. Except that... Except that the two protagonists are two boys. And, it should be noted: the story ends well, without appalling suffering or family drama.

Holder of the Research Chair in Sexual Diversity and Gender Plurality, Martin Blais has seen the series. And it's far, far from the first memory he has of LGBTQ+ representations on the small screen when he was a teenager. An image comes to mind: that of the character of Éloi Richard in Jamais deux sans toi, in the early 1990s. He was Bernie's boyfriend (Serge Thériault). With a pale face
and shortness of breath, Éloi was suffering from AIDS. 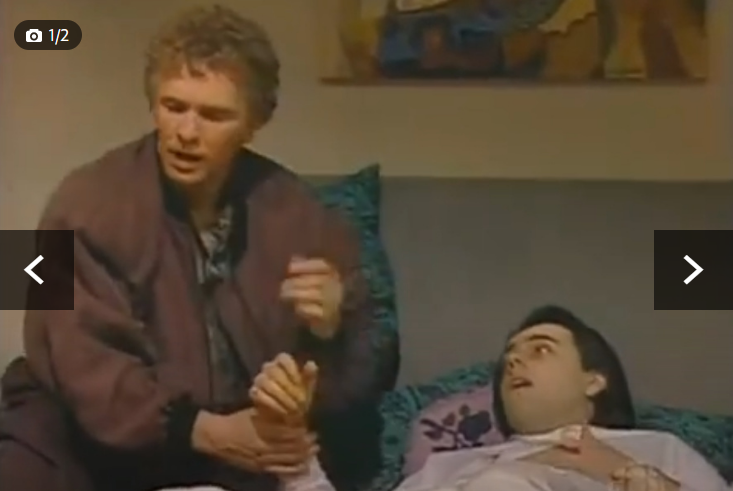 "He was on the verge of death," recalls Martin Blais. Obviously, that's what was happening and it was important. But this is the image that parents had of gay men. It's sure that it marks! There, we see something else. And it's fantastic. »

The speakers we spoke to are unanimous: the presence of positive role models in the media space has a significant impact.

"It encourages young people to say to themselves: 'I, too, can be authentic with what I feel and I will still have a satisfying life,'" says Marie Houzeau, Executive Director of GRIS-Montréal, an organization that demystifies sexual and gender diversity in schools. A virtuous circle ensues, she says. The more positive role models there are today, the more there will be tomorrow.

Marie Houzeau is also thinking about the series Sex Education, also on Netflix. The American series Euphoria, very popular with teenagers, also features nuanced and complex queer characters. In Quebec, the series Nomades (Tou.tv) tells the story of Sam's quest for freedom, played by actress Romane Denis. Sam is bisexual, but this is not the focal point of his quest.

What I liked about Sam's character was that her bisexuality wasn't what defined her. It makes it possible to normalize, to trivialize.

Romane Denis, who plays Sam in the series Nomades

Romane remembers gay characters on TV when she was a child. "It was, 'Oh my God, am I gay? Ah! I'm going to try to commit suicide!" she says. I didn't understand why we made a big deal out of it. »

A more assumed generationStories like the one presented by Heartstopper also exist in real life. There are young people, therefore, for whom it is possible to live in accordance with their feelings and needs without having to go through paths filled with adversity.

Among the younger generation, something is rapidly changing in attitudes towards sexual diversity, says Martin Blais, professor at the Université du Québec à Montréal (UQAM). A trend towards some normalization, greater inclusion. 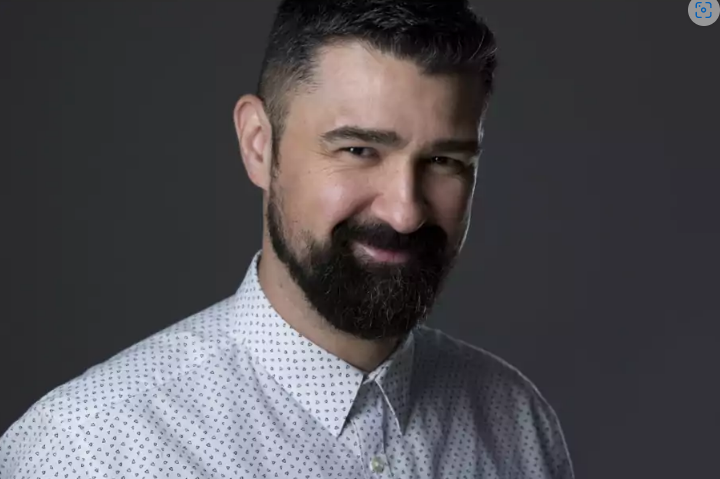 I do not want to generalize, because there are still environments where it is more difficult for young people, but I think there is an elevator movement. We changed floors. And I think the representations in the media bear witness to that.

It is also the first generation to have grown up in a context where it was legal to legally unite with a person of the same sex, says Martin Blais.

LGBTQ+ content creator Marie Gagné observes a gap between millennials and gen Z, who at 26 is straddling the two. 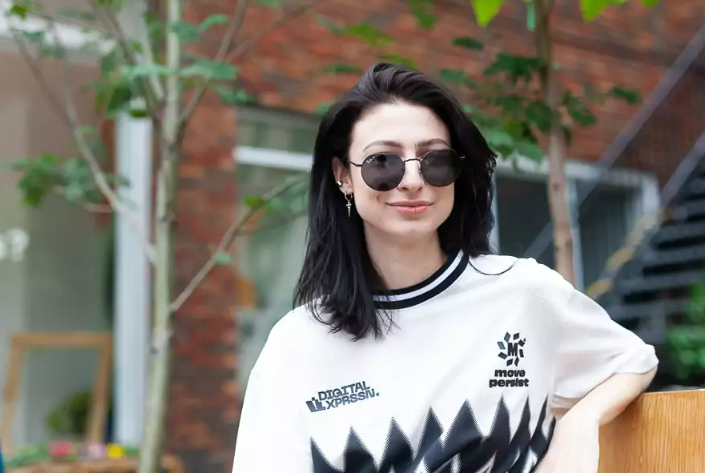 Gen Z people, they assume so much more, they are so much more proud," says the one that the general public was able to see, in 2020, in the series Singles at the end. It is also to help normalize the fact of being a lesbian that Marie Gagné agreed to participate in the show. "Scoop: I wasn't really at the end of my rope!" she laughs.

Marie Houzeau notes that, in recent years, coming outs occur earlier in adolescence and go rather well, "both with the entourage and the group of close friends". When family culture normalizes the possibility that the child will one day date a same-sex partner, it's obviously less anxiety-provoking for the young person, she says.

"Young people do not live in a vacuum either," says Marie Houzeau, who points out that, even in 2022, no school environment is completely free of homophobia and transphobia.

"There is a missing link," summarizes Marie Houzeau, according to whom it may be necessary to begin to question adults, the systems in place, culture in the broad sense.

Research shows that it is more difficult for people who report lesser-known sexual identities or gender identities, such as non-binarity, bisexuality, pansexuality, says Martin Blais, for whom there is still a lot of education to be done.

Assumed and happyThe struggles of recent decades have borne fruit. For young adults from the LGBTQ+ community, coming out of the closet went well... and the rest as well. Testimonials.

Marie GagnéMarie Gagné grew up in Matane, in the Gaspé Peninsula, in an "ultra-heterosexual, white and Catholic" environment, where girls who dressed as "boys" risked being called lesbians in the schoolyard. As if it were an insult. 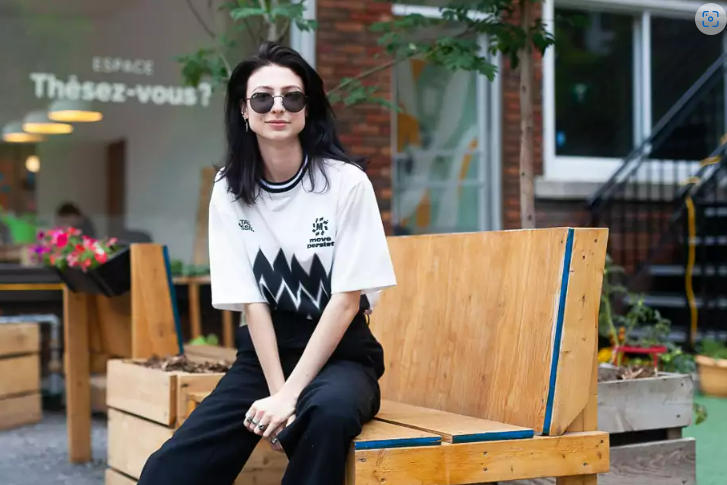 In my head, it wasn't even an option for me to be queer.

Marie became aware of her attraction to women in CEGEP around the age of 17 or 18. And it was while listening to the film C.R.A.Z.Y. with her mother that she told him about it. "I asked him to pause, and I told him that what the guy was going through,
I was experiencing, too," the 26-year-old recalls.

When Zachary's character confirms to his father that he is homosexual one night in the rain, the latter orders him to leave. Marie, on the other hand, had a completely different reaction.

"It wasn't such a big deal for my mother," recalls Marie, who was afraid of disappointing her loved ones. Her father told her that the important thing is that she is happy. Mary then told another person and then another. "It was done in a natural way," she says.

As a content creator on the Internet, Marie exposes herself. And yes, she agrees, she sometimes receives hateful comments. "But I'm fortunate to have an absolutely exceptional community," she says. I would say that 95% of the comments are ultra-positive. »

Marie has long presented herself as queer, an inclusive term she still uses today, but she also embraces
the word lesbian. "And I use it proudly," she concludes. 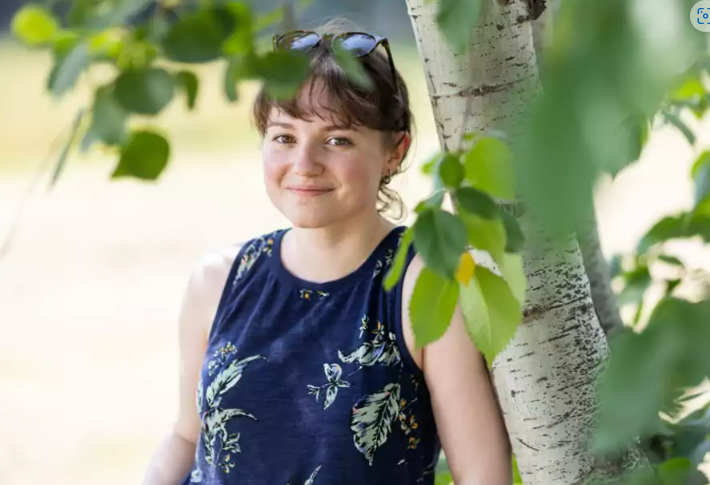 "In The Hunger Games, in Harry Potter, the rules aren't always right, the adults aren't always right. And that's how people my age were raised. If you feel that you are honoring the person you are, go ahead," sums up the sparkling Romane Denis, who has been seen, among others, in the series Subito texto, Nomades and Les pays d'en haut. Her relatives, she says, care a lot more about consent than sexual orientation.

Romane Denis is 24 years old. In her generation, she says, we learned to honor difference, to express our emotions. People his age have also been able to rely on social networks to meet young people who look like them, to feel less alone.

It is not the same in all circles (Romane is well aware of this), but in hers, for all the reasons listed above,
sexual identity has a rather banal character.

People don't care, honestly, and that's what I think is cool.

It was after listening to an episode of the American series The Fosters (which follows the journey of a couple of women) that Romane Denis had a revelation. Intuitively, she knew she wasn't cheerful, but that night, lying in bed, she realized there was something else. That both exists too. The next day, she told her mother, who reacted well.

Romane does not put pressure on herself to define herself. For her, it's the person who counts, not her gender. And no, she never came out officially. "I've never been in."

The first as a lesbian girl, at the age of 13. The second as non-binary, at 15 years old. Then the last one, a few months later, as a trans boy.

Each coming out has been an immense source of stress and anxiety, because it comes with so many questions and discomfort. But after each coming out, there was a revival, a rebirth.

The last one was obviously the most liberating for Elliott, who hid this deep identity since the age of 10.

He felt bad about doing this to his parents, aware of the long road ahead. He was also afraid of disappointing them.
Her father had always wanted to have a daughter.

"But it was so well received," says Elliott, who will always remember this sentence, pronounced by his dad: I'd rather have a boy than have a dead girl. At school too, it went well. He was able to sign Elliott on his work.

Elliott has had two or three bad experiences in his life, with a teacher and with an employer, but he says he comes out of it grown. "At 98%, I have nothing to say, personally," he says.

Trans people prefer to start their lives over again without talking publicly about the old one. Elliott respects them. But for him, it is important to share his experience, to be the model he would have needed, at the beginning of his transition.

Guillaume Séguin
Guillaume Séguin did not come out to his family. Instead, it was his mother who heard him talking on the phone with a boy he met on the internet at the age of 14. It was his mother, therefore, who delicately approached him by asking him how he was doing, if he had any questions.

"I was able to say it very openly to my mother," recalls Guillaume, who didn't care much about it. His mother feared that he would be bullied at school. With William's agreement, she announced it to her sister, to her brother, to her father.
"For everyone, it just didn't change anything," says the 29-year-old.

At school, too, Guillaume did not perceive any change in him. In his program, in visual arts, he was surrounded by girls. "And since I was friends with the beautiful girls, the guys didn't deny me!"

At the age of 18, 19, he introduced his lover to his family, in the same way that a heterosexual would have done.

At work, everyone knows this. I lead group classes, too, and I talk regularly about my husband. There are never comments, surprises, funny looks. I can be out in all my circles without it being a problem.

"When I was holding my boyfriend's hand in the street 10 years ago, I saw motorists stop to shout insults at me," he says. But the more it progresses, the less it is the case. »
CATHERINE HANDFIELD
THE PRESS
Montréal Pride| Normalizing | diversity The Press (lapresse.ca)
up