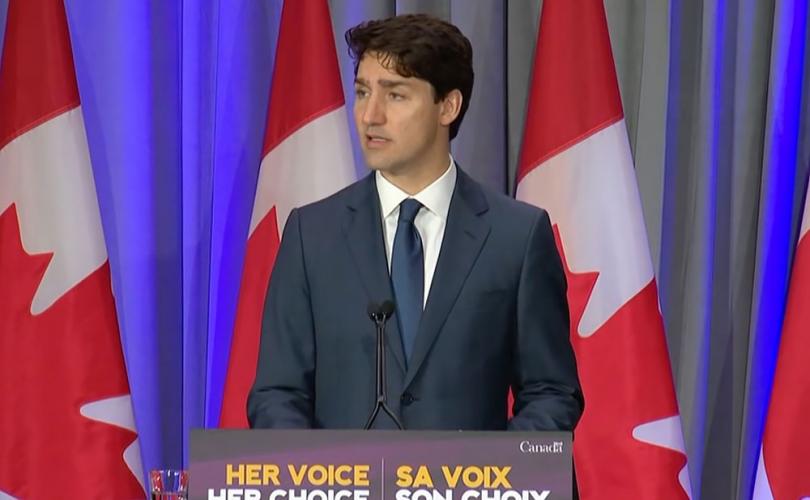 Justin Trudeau’s Liberal government released details of the funding Sunday.
“Canada’s investment … aims to ensure that its international partners can maintain their services for vulnerable populations where possible, including support for sexual and reproductive health and rights,” a ministry of international development press release stated.

“Canada’s investment in these programs is in line with its feminist international assistance approach, since this global crisis has
the potential to exacerbate inequalities and reverse development gains,” it stated.

“This is especially true for the women and children who are already among the world’s poorest and most vulnerable citizens
and who may now be expected to take on additional caregiving responsibilities in their families and communities.”

However, the Trudeau government’s emphasis on “support for sexual and reproductive health and rights” in funds to fight the coronavirus internationally is not surprising given the prime minister’s abortion extremism.
The Liberals have pledged a total of $7.1 billion by 2030 to provide and promote contraception and abortion as part of international aid.

And as Trudeau stated in March 2017, that includes bankrolling campaigns to overturn national laws restricting abortion.

Women around the world “are denied legal control over their bodies and reproductive health,” and “gender equality and rights, and the empowerment of women and girls” are “the heart of our international development work,” he said then.

In 2017, then-global affairs minister and current deputy prime minister Chrystia Freeland likewise described “sexual reproductive rights” and “the right to safe and legal abortion” as “at the core of our foreign policy” and then-international affairs minister Marie-Claude Bibeau claimed abortion is “a tool to end poverty.”

Trudeau also stated in 2018 that Canadians are free to oppose abortion as long as they don’t act on their convictions. “We need to know that there is a difference between freedom of expression and acting on those expressions and beliefs,” he said at the time.

“Abortion is a failure of feminism, because it upholds the status quo that forces women to think they have no other choice but to have an abortion in desperate circumstances. True feminism would be working to ensure that no woman ever feels

she has to make that choice again,” it pointed out.

“Giving over $150 million to help ease the suffering from a global pandemic is, without a doubt, a positive and generous thing. But using that money to sneak in extra taxpayer funding for international abortion seems more like exploiting a crisis to push an agenda,” LiveAction stated.
Moreover, abortion “is also never medically necessary, and it’s not health care. Yet these lies continue to be repeated by abortion activists, particularly during the COVID-19 pandemic,” it pointed out.

That was echoed by Hanna Kepka of Campaign Life Coalition, Canada’s national pro-life, pro-family political lobbying group.
“It’s outrageous when we are fighting for people to survive, we’re paying for the killing of unborn children,” she told LifeSiteNews.
Indeed, in the United States, five American organizations representing more than 30,000 pro-life physicians have blasted “the call to continue elective abortion during the COVID-19 pandemic,” characterizing it as “medically irresponsible.”

Abortions are neither “essential” nor “urgent” and to continue them during the pandemic would “consume critical resources such as masks, gloves, and other personal protective equipment, and unnecessarily exposes patients and physicians to pathogens,”
they wrote in a March 23 open letter.

Moreover, abortions also lead to more patients in emergency rooms, as most abortionists “instruct women to go to an emergency room if they have any concerning symptoms after the abortion,” the pro-life doctors pointed out.

“If this is the case in the United States, how much worse must it be in developing nations,
which often lack even basic medical care,” Kepka observed.

According to a ministry backgrounder, the $159.5 million, which includes $50 million announced in March, will be distributed as follows:
Abortions within Canada have continued unimpeded during the coronavirus outbreak, despite provincial health authorities across the nation restricting non-essential surgeries due to the virus’ strain on the healthcare system, as LifeSite’s Anthony Murdoch reported last week.
That situation was described as “insane” by Campaign Life researcher and youth coordinator Josie Leutke.
“It is despicable that abortion facilities are wasting desperately needed medical equipment like masks in continuing their business of killing innocent children while genuine healthcare providers are running themselves ragged trying to save lives,” she said.
up