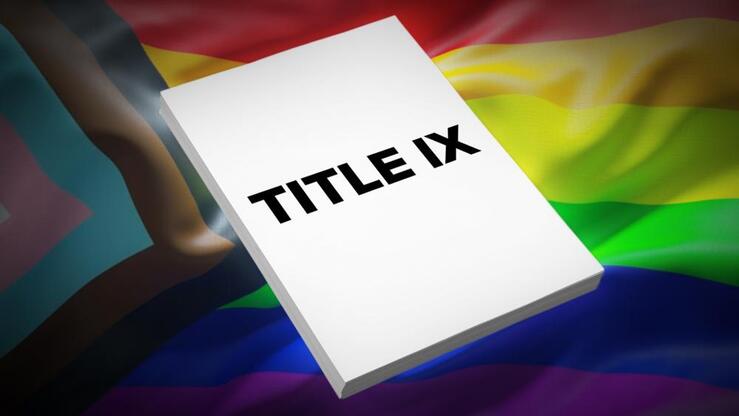 The proposal, announced on the 50th anniversary of the Title IX women's rights law, is intended to replace
a set of rules issued during the Trump administration.

“As we celebrate the 50th anniversary of this landmark law, our proposed changes will allow us to continue that progress and ensure all our nation’s students - no matter where they live, who they are, or whom they love – can learn, grow, and thrive in school," he said. ​

The proposal is almost certain to be challenged by conservatives. It is expected to lead to new legal battles over transgender students participating in women's sports.

It now faces a public feedback period before the Biden administration can finalize any changes, meaning the earliest that the policy is likely to take effect is next year.

For the first time, the rules would formally protect LGBTQ students under Title IX. Nothing in the 1972 law explicitly addresses the topic, but the new proposal would clarify that the law applies to discrimination based on sexual orientation and gender identity.

It would make clear that "preventing someone from participating in school programs and activities consistent with their gender identity would cause harm in violation of Title IX," according to the department. More specific rules dealing with the rights of transgender students in school sports will be released later, the department said.

"As we look to the next 50 years, I am committed to protecting this progress and working to achieve full equality, inclusion, and dignity for women and girls, LGBTQI+ Americans, all students, and all Americans," he said in a statement.

Many of the proposed changes would mark a return to Obama-era rules that Trump's policy replaced.

As CBN News reported earlier this month, supporters say the changes to Title IX are about expanding rights for students, but critics believe it will destroy women's sports, privacy, and more.

Title IX became law in 1972 and it was meant to protect girls' and women's rights in education. Among other things, the Biden administration wants to change the way schools respond to sexual misconduct on campuses and codify protections
for LGBTQ students by changing the definition of "sex."

Sarah Parshall Perry, a senior legal fellow at The Heritage Foundation, says that's where it gets sticky for women's sports.

"By adding the definition of sex to include sexual orientation and gender identity, they are unnecessarily opening up every sex separate space that was anticipated to be needed under Title IX," Perry said in an interview with CBN News. "The regulations and congressional records make that very clear that men and women, boys and girls, are different and need equal spaces but require separation in some context. All of those spaces, whether it's athletics, locker rooms, bathrooms, single-sex admissions, or dormitories, would all be thrown open to individuals who identify as girls and women regardless of what their biology is."

Conservative legal scholars like Perry – and many feminists – say that if men who identify as women can compete against women and share their spaces, it will erase women's sports and privacy.

One of Betsy DeVos' legacies as education secretary under the Trump administration was changing how
schools handle sexual misconduct on school campuses.

"We spent a lot of time regulating on this issue of how campuses, schools must handle this issue of sexual misconduct under Title IX and we put forward a rule that is fair, balanced, that recognizes the right to due process, that respects the right of the complainant, the victim, to proceed with a case as they want it to proceed," she explained.

"And instead it will return the college grievance procedure to a guilty until proven innocent standard, giving one Title IX investigator on a campus all the power in the world to act as judge, jury, and executioner for someone's educational fate," said DeVos.