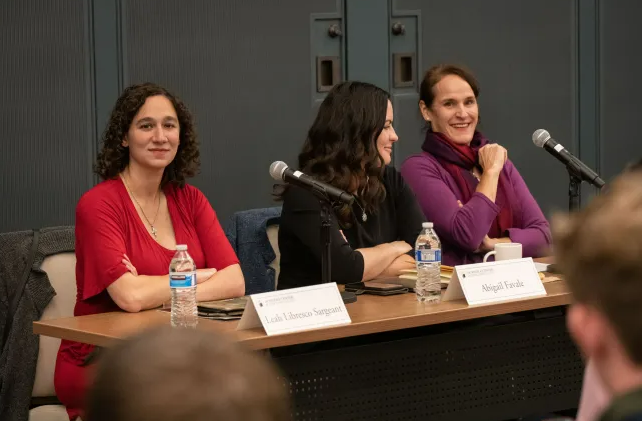 Efforts to redefine women undermine their feminine dignity and unjustly pressure them to resort to abortions to keep pace with men in the workforce, a panel of women scholars said earlier this month in a discussion that highlighted the harmful consequences of de-sexing society.

Titled “The Dignity of the Sexed Body: Asymmetry, Equality, and Real Reproductive Justice,” the Nov. 13 discussion took place at the 21st annual fall conference of the de Nicola Center for Ethics and Culture at the University of Notre Dame, and featured presentations by English professor Abigail Favale, legal scholar Erika Bachiochi, and writer Leah Libresco Sargeant.

Favale, the dean of the College of Humanities at George Fox University, in Newberg, Ore.,
spoke about the dangers of divorcing the terms “woman” and “female.”

Currently, she noted, “defining a woman as an adult human female is considered hate speech” by some, and use of the terms “pregnant woman” or “breastfeeding” can be labeled discriminatory. Yet “appropriating the identity of a woman is considered laudatory, liberating, the next frontier of civil rights,” she said.

“[I]f woman no longer names the billions of persons who are female, how do we speak about them?” Favale asked.

Apparently, the answer is not so easy. Favale cited three failed definitions as proof.

One, from the Australian Academy of Sciences, defines a woman as “anyone who identifies as a woman.” A second definition, offered by British philosopher Katherine Jenkins, is someone who “experiences the norms that are associated
with women in her social context as relevant to her.”

A third definition comes from trans-identified person Susan Striker, who says a woman is “useful shorthand for the entanglement of femininity and social status regardless of biology — not as an identity, but as the name for an imagined community that honors the female, enacts the feminine and exceeds the limitations of a sexist society.”

Favale says these definitions unseat the dignity of women in a deeply disquieting manner. 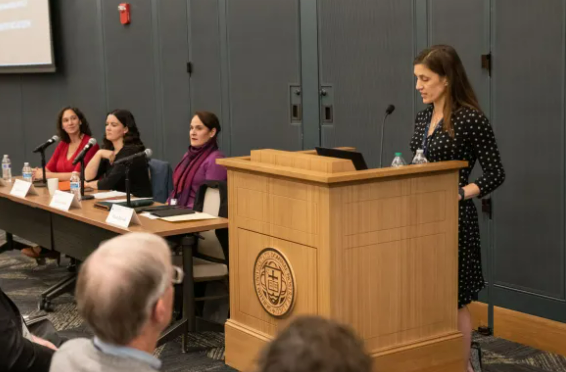 Libresco, Favle and Bachiochi during the “The Dignity of the Sexed Body: Asymmetry, Equality, and Real Reproductive Justice” panel Nov. 13. Steve Toepp / University of Notre Dame“The most stunning aspect of this linguistic insurrection is the unnaming of female humans,” she said. “To quote Helen Joyce: The quest for the liberation of people with female bodies has arrived at an extraordinary position: that they do not even constitute a group that merits a name.”

Women are the primary beneficiaries of the “few sex segregated spaces that continue to exist in western, liberal democracies — bathrooms, locker rooms, prisons, shelters, sports teams — [and] all of those exist for the benefit of women who
are more vulnerable to sexual assault and harrasment,” she said.

Ironically, Favale lays blame at the feet of the feminist movement.

“For the past five decades mainstream feminism has enthusiastically been sawing off the branch it has been sitting on,” Favale said.

“While there are myriad iterations and definitions of feminism, a common denominator among them is ostensibly a serious concern about the status and well-being of women,” she said. “And yet this very concept has been steadily eroded of content by feminists themselves.”

Without a reuniting of the two terms, warns Favale, the dignity of women will no longer be protected.


“[A] feminism that rejects an entire definition of woman grounded in the concrete reality of the sexed human body cannot effectively advocate for those whose lives and circumstances are shaped by that body,” she concluded.

Is it men who’ve been liberated?

Bachiochi, a pro-life feminist legal scholar and fellow of the Ethics and Public Policy Center in Washington, D.C., elaborated on these bodily realities in her discussion of “the natural asymmetry of the sexed body.”

As Aristotle observed, “males reproduce outside of themselves and so can walk away, and females reproduce inside of themselves and so cannot,” Bachiochi noted. She went on to describe the physical differences between male and female arousal, the effect of testosterone in men, and the waves of oxytocin which uniquely affect the woman after the sexual act, chemically bonding
her to her sexual partner whether he is worthy or not.

“[A]t the heart of sex, there is a deep inequality,” she argued.

Bachiochi claimed this asymmetry has prompted many movements to rectify the imbalance.

“Now, throughout human history women have attempted all sorts of means and methods to manage and even escape these natural asymmetries, asymmetries that make women vulnerable not only to stronger and more libidinous men, but also to the dangers and difficulties of childbearing,” she said. “From nascent contraceptives to dangerous aborations even to infanticide,
desperate women have often resorted to desperate measures.”

What is new today, she said, is that women believe that equality with men “demands the affirmative right to engage in the killing of one’s own vulnerable and dependent child” and the right to engage in “putatively consequence-free sex just like a man.” 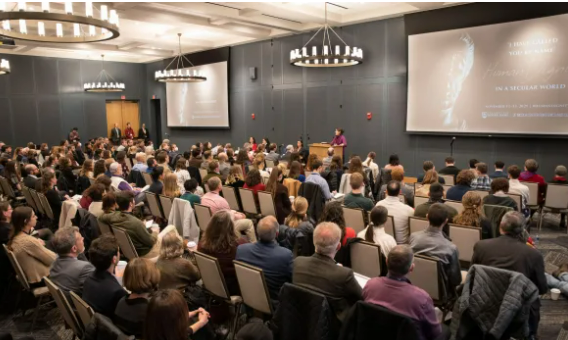 Libresco, Favle and Bachiochi during the “The Dignity of the Sexed Body: Asymmetry, Equality, and Real Reproductive Justice” panel Nov. 13. Steve Toepp / University of Notre DameIronically, however, women’s liberation seems to have liberated men more than women, she argued. She highlighted that women experience this “right” to consequence-free sex with a great deal of cognitive dissonance.

Many women engage in casual sexual relationships “as a kind of right, a right that..too often becomes a kind of duty,” one that can result in the unintended consequence of pregnancy, Bachiochi said.

“It is the government, then, in seeking to restrict abortion, that would force [a woman in this position] to be a mother,” she said. “And so equality demands, from this perspective, that women enjoy the right to engage in a life-destroying, child-destroying act.”

Bachiochi, who also serves as the director of The Wollstonecraft Project at the Abigail Adams Institute, contrasted this attitude with the vision of Mary Wollstonecraft, a British advocate of women’s rights.

Wollstonecraft believed that asymmetries in the sexed body led to further asymmetries in the political, legal, and social realms. But rather than seeking to rectify these differences by making women more like irresponsible and libidinous men, Bachiochi said, Wollstonecraft and others believed the solution to procuring equality lay in greater chastity among the male sex.
“The little respect paid to chastity in the male world is, I am persuaded, the grand source of many of the physical and moral evils that torment mankind, as well as of the vices and follies that degrade and destroy women,” Wollstonecraft famously said.
“In Wollstonecraft’s view, engaged and attentive fatherhood was the very best means to direct men’s desires properly, by bringing them into the light of shared domesticity,” argued Bachiochi.
The pressure to conform

Sargeant, the author of “Arriving at Amen: Seven Catholic Prayers that Even I Can Offer,” and “Building the Benedict Option,” agreed with Bachiochi’s contention that women’s equality is not synonymous with the ability to have
sex and walk away from any consquences as men can do.

“[C]ontraception and abortion are the most dangerous compromises that women are asked to make in order to make up for not being as good at being men, as it would be convenient for others if we were,” she argued.

“Ruth Bader Ginsberg thought … that women cannot have equal protection under the law, cannot be equal as citizens, without having the ability to pay the entrance price to society, which is the ability to abandon somebody who is vulnerable and depends on you,” Sargeant said.

While that premise is false, she said, this is the way society is currently structured.

“Abortion is one more example where we say to a woman, ‘The problem is that you are a woman. It's your responsibility to find a way for us all not to have to deal with that unpleasant reality, and whatever compromise, whatever sacrifice, whatever suffering you have to cause … is worth it because we don’t have room for women here,’” Sargeant said.

Sargeant sees this outlook manifested in the unreasonable pressures routinely placed on new mothers to return to work days or weeks after giving birth. In essence, women in these situations are told to be like men, she said.

Instead, Sargeant argued that the culture needs an entirely different argument about the human person, one that recognizes vulnerability, dependence, and the dignity of love, rather than asking women to conform to a standard of masculine autonomy.