Demonstration against enlargement
of assisted procreation in France 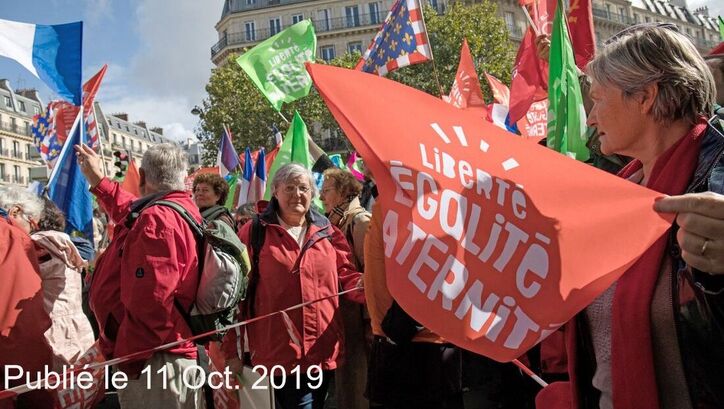 Seven years after the monstrous mobilizations in France against gay marriage, several tens of thousands of people marched Sunday in Paris to claim their refusal to see single women or women couples founding a family "without father".

The opening to all French women of Assisted Human Reproduction (ART) is the flagship measure
of a highly sensitive bioethical bill discussed in Parliament.

A prospect fought by protesters who marched in the south of the capital waving green or red flags stamped with the words
"Liberty, Equality, Fatherhood", a nod to the motto of the French Republic, "Liberty, Equality, Brotherhood ".

"For almost 2 years, our attempts to dialogue have never succeeded ... there is only the street left to be heard," said the president of the conservative Catholic movement the Manif for all, Ludovine de la Rochère, already in point of mobilization against same-sex marriage seven years ago.
"This demonstration is a warning to the government. Will he open the dialogue
or will he remain like [then President François Hollande] in 2012 in contempt? She added.

The parade gathered 74,500 people, according to a count realized by the firm Occurrence for a media collective including AFP.
The mobilization of 2012-2013 against the law authorizing gay marriage had gathered up to 340,000 people according
to the police and 1.4 million according to the organizers.

The latter had called for the gathering with more than three million leaflets distributed, walls covered with posters for weeks, two special chartered trains and more than a hundred full buses throughout France.

In their line of sight, the opening of the PMA to couples of women and single women, campaign promise of Emmanuel Macron
adopted on September 27 by the deputies, who continue to debate the other articles of the text.

"I think it's important for children to have a father," says Véronique, 25, a production assistant, coming from the north
of the Paris region with her husband and baby. "The law should not make them orphans," she says.

The vast majority of studies, mostly conducted abroad, conclude that children born to LDCs in homoparental families
grow up in the same good conditions as others, but opponents refute their validity.

Arrived by bus from Brittany, Christian Kersabiec, 68, refuses "this new society where we play the sorcerer's apprentice".
"The family with a father and a mother is an ecosystem to protect," he says.

"We know we're alone, we're going against the grain," says Loïc, 29, from Châteauroux.
"This law will pass, but I am here to be able to tell my children that I fought," he adds.

These protesters, however, appear out of step with the majority of French society. "The opinion is much less tense on the PMA than marriage"
for all, said Frédéric Dabi, Deputy Director General of the FIFG.

According to the latest poll of this research institute in September, a very large majority of French support the opening of the PMA
to single women (68%) and female couples (65%), a "record level".

Since then, the left-right divide has been "weakened", the political scientist says. Unlike 2012,
no leading personality on the right participated in Sunday's procession.

LGBT associations fear that this mobilization will revive the homophobic acts, which had jumped in France in 2013.