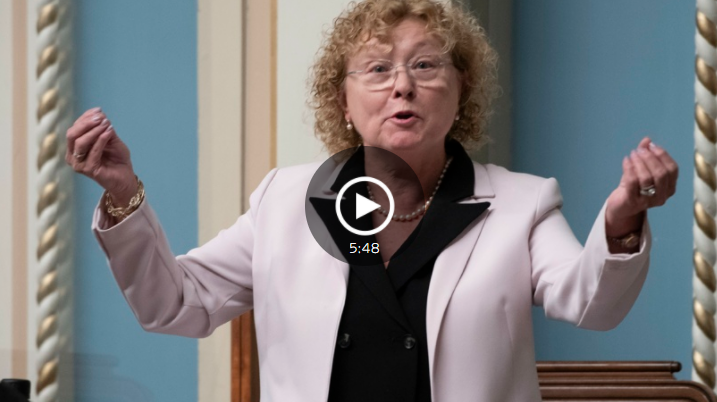 (Quebec) The Legault government will disburse $200.5 million over five years to improve the quality of life of caregivers. Nearly half of the investments will go to enhance respite services "of all types" to give caregivers a little air.
.The Minister responsible for Seniors and Caregivers, Marguerite Blais, presented Wednesday her government action plan for caregivers 2021-2026 which essentially aims to achieve the orientations of the National Policy for Caregivers, presented last spring.

Québec will invest $95 million by 2026 in enhancing respite services for caregivers, who are often out of breath and resources. "[We are talking about] respite of all types, it can be for physical disability, intellectual, autism spectrum, it is also all the Maisons Gilles-Carle, it is Baluchon Alzheimer. We are talking about multiple organizations that will be supported," saidMs. Blais.

An amount of $60 million will go to the provision of individual and group psychosocial support, including virtual services. Some $15 million is planned to raise awareness of the caregiver role.

"This action plan starts from the bottom up, it is not [designed from above] by the Ministry, it is a plan that was designed by organizations, we consulted on multiple occasions," assuredMs. Blais who was accompanied Wednesday by the Director General of Support for Caregivers, Guillaume Joseph, and the Executive Director of Proche aidance Québec, Melanie Perroux.

The action plan also provides for the establishment of the Observatoire québécois de la proche aidance, which will better document the situation of caregivers, particularly young people.

"It is so important to recognize the fundamental role of caregivers and the fact that it is now enshrined in legislation, there is never a government that will ignore both a policy and an action plan," said Minister Blais.

The National Policy for Caregivers stems from the Act to Recognize and Support Caregivers, passed in October 2020.

Effects on home care
The roll-out of the government's action plan will have an impact on the provision of home care services,Blais noted. "If you support the caregiver in their mission to ensure that people can stay at home as long as possible, it will be a game changer," she said.

In his opening remarks last week, Premier François Legault announced that he will give a mandate to the Commissioner of Health and Welfare, Joanne Castonguay, to focus specifically on home care. It will have to submit its recommendations to the government.
The mandate has not yet been defined.

"After four years, we will have invested 1.8 billion [in home care]. Could this 1.8 billion be invested more efficiently? [...] What we want is for the commissioner to look at the best elsewhere, and from that, we will be able to evolve in relation to home care services because it is so essential. That's the basis of everything," Blaissaid.

Québec solidaire, which is proposing the creation of an allowance for family caregivers, said it was disappointed with the plan presented Wednesday. "The minister is putting money into any kind of one-time respite. But the real needs are more at the level of daily respite. For a caregiver who needs a simple block of four hours of break during the week or on the weekend, to breathe a little, there will be nothing more for now, "lamented the head of seniors at Québec solidaire, Sol Zanetti.

There are an estimated 1.5 million caregivers in Quebec, 58% of whom are women, according to Statistics Canada.

FANNY LÉVESQUE
THE PRESS
Caregivers| Quebec is allocating $200 million over five years| The Press (lapresse.ca)
UP